Despite a full roster of planned and already constructed pipeline projects aimed at uncorking the glut of supply from the Appalachian Basin, the average basis of U.S. forward market locations covered by NGI’s Forward Look for the remainder of 2015 came in at negative 3.3 cents during trading on Aug. 19. Said differently, the average price of natural gas across the United States is expected today to be 3.3 cents less than the Henry Hub over the course of September, October, November and December 2015, and the gap is expected to get much wider before narrowing. 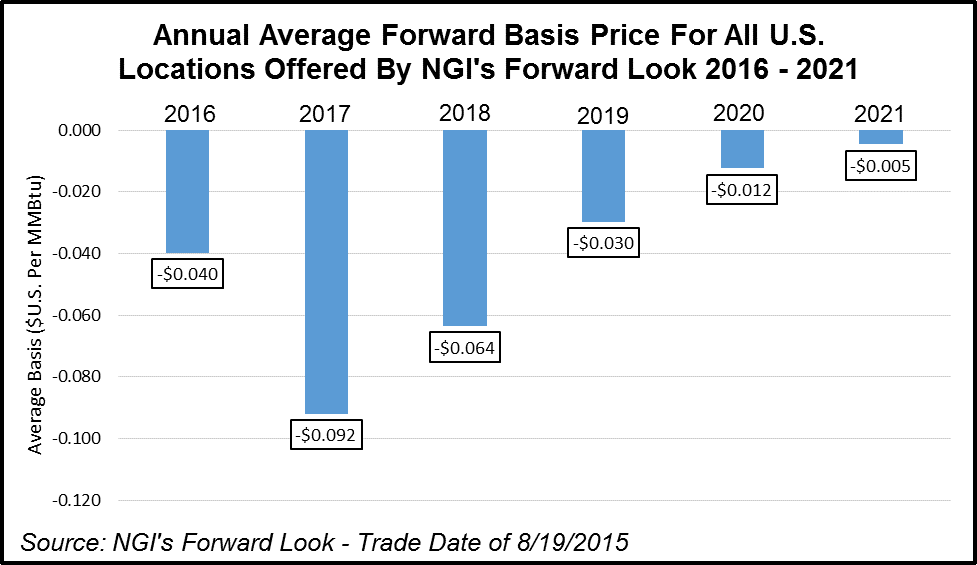 In 2016 this basis is expected to widen slightly to a U.S. average basis of negative 4 cents and in 2017 it will more than double to negative 9.2 cents, according to NGI’s Forward Look data. However, this widening of the average U.S. forward basis reverses trend and enters a period of contraction from 2018 through 2021. All in all, the market is predicting that prices across the country will be cheaper than the Henry Hub at least through 2021 (see chart).

Although the Henry Hub price, as the basis for the CME futures contract, is frequently used as a proxy for the price of U.S. gas, it is often very different from the national average price of natural gas. Much of the difference these days is because of shifting pricing dynamics in the Northeast, which, as BTU Analytics’ Kathryn Downey Miller, managing director of analytics, put it, has become the marginal source of U.S. supply going forward.

As Appalachia gas pours out of the Marcellus, Utica and even the Upper Devonian into the market, basis prices on nearby pipes have fallen over the past few years. This trend continues to play out today as the influence of this mighty supply region continues to grow. As more of the initial pipeline constraints that choked Appalachia gas are relieved, the swell of gas is spreading outward. Just this month, Tallgrass Energy initiated its reversal of Rockies Express Zone 3 which has already started to move gas into the Midwest (see Daily GPI, Aug 19,July 28). Check out NGI‘s Rockies Express Zone 3 Tracker for the latest flow data and associated natural gas price movement in the region.

“It seems the market is anticipating the spreading of a Marcellus discount to continue for at least another year or two,” remarked NGI markets analyst Nathan Harrison.

Some in the market have speculated that the push of Marcellus gas westward would first suppress Midwest prices. At the same time, gas that was previously flowing to the Midwest from the Gulf would be pushed back home bringing down Gulf pricing at locations including the Henry Hub (see Forward Look, July 24).

“The narrowing of the national average basis past 2017 could just as easily be because of a declining Hub price as it could be from a rising national average,” added Harrison.

Other factors could also be responsible for the end-of-the-decade trend reversal. No doubt the market is monitoring the progress of proposed liquefied natural gas (LNG) export terminals as they go through the approval process and begin construction, according to Patrick Rau, NGI director of strategy and research.

“Forthcoming U.S. LNG exports are certainly part of this, but perhaps the largest impact on basis differentials is new pipeline infrastructure,” Rau said. “We know a bunch of it will hit the market coming out of the Appalachia by the end of 2018, and that is likely being reflected in the forward curve. It’s as if the market is saying, once the major supply center in the U.S. has enough takeaway capacity, which was the case for years when the Gulf Coast was the largest and the incremental producer, then order in the basis markets will be restored.”

A roundup of news and commentary from NGI’s LNG Insight Wood Mackenzie said feed gas deliveries to U.S. terminals fell by nearly 730 MMcf day/day to 8.93 Bcf on Thursday based on evening cycle nominations. The declines are concentrated at Cheniere Energy Inc.’s Sabine Pass terminal, “where heavy fog has significantly affected visibility” and disrupted…