There are indicators that natural gas prices may have bottomed out in North Dakota and there could be the start of a long, slow trend for price increases starting next year, the state’s top oil/gas official said in reporting the state’s latest increased production statistics. 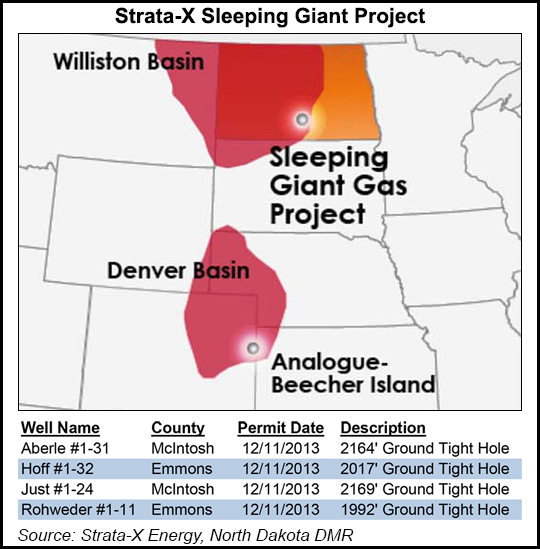 While there have been a handful of recent permits for gas drilling in the state, North Dakota is a long way from a surge in new permits in the south-central or eastern part of the state away from the Bakken formation, said Lynn Helms, director of the Department of Mineral Resources (DMR) whose oil/gas division oversees exploration and production activities.

“It looks to us like the natural gas markets have hit bottom or are into a multi-year slow increase in gas prices,” Helms said. “On a national basis, the volumes of gas in storage have exceeded the five-year average, which shows some strength in natural gas prices.”

Helms said there are indicators of “slow, gradual trending upward” for gas prices. And in North Dakota that means some of the state’s shallow-lying gas plays might become more economic in the future.

Earlier this month, DMR reported the start of a wildcatting effort to the southeast of the main Bakken/Three Forks robust drilling area with the issuing of two new permits each in Emmons and McIntosh counties.

“The division wanted to make the announcement because it is so rare to see anything issued this far east of Highway 83,” said Helms, categorizing the permits as “exploratory.”

Denver-based Strata-X Energy obtained all four permits as part of its “Sleeping Giant” gas project. “A drilling company has been sourced to drill these wells; however a mobilization date has not been scheduled,” Strata-X said in a project status report on its website.

Although North Dakota has become synonymous in the industry with the Bakken Shale, the target of Strata-X Energy’s Sleeping Giant Project is actually the shallow Niobrara. According to recent presentations, Strata-X has leases and options covering about 190,000 gross (145,000 net) acres in the area with four permits for vertical, fracked wells ranging from 1,992 to 2,169 feet in depth.

Even if the exploratory drilling is successful, Helms said, a more intense gas drilling program is still “many years” away. He said a previous drilling program in Emmons County was attempted in 2006 by Staghorn Energy LLC, but all wells that were drilled proved uneconomic.

In any event, Helms said he doesn’t expect any surge in gas drilling permits for a number of years.

“Is the structure there? Is it mature enough to generate gas or oil? We’re years away from a surge in permits,” said Helms, noting this is a test of a new formation in a new area where there are lots of unknowns.