Natural gas and wind are tops as the lowest cost technology options for new electricity generation in the United States when costs, public health and environmental benefits are considered, according to researchers at the University of Texas at Austin (UT). 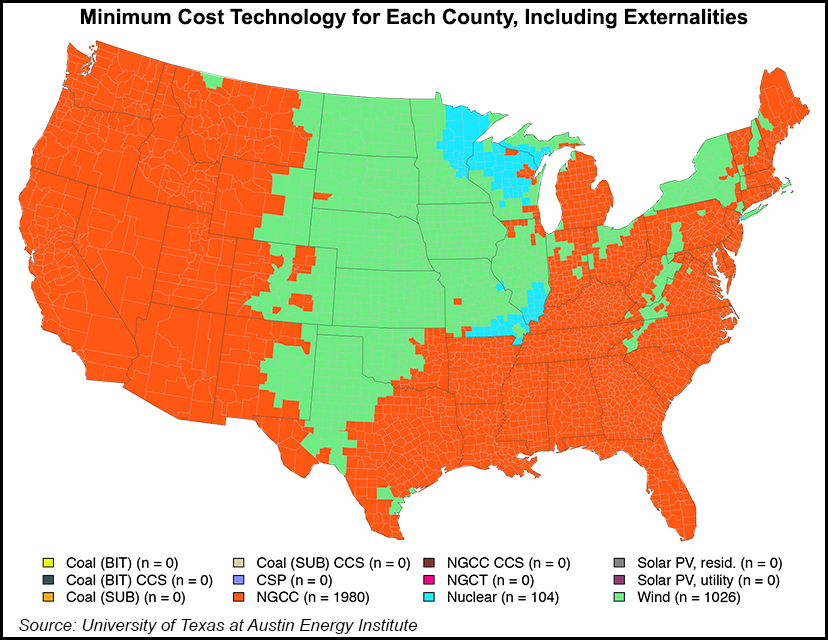 “Multiple generation technologies,” including natural gas, coal, wind, solar and nuclear were studied by an interdisciplinary team of researchers at the university within the engineering, economics, law and public policy departments and coordinated by UT’s Energy Institute. They depicted their findings in a series of maps to illustrate the cost of each generation technology on a county-by-county basis throughout the country. The white paper, published as part of the Full Cost of Electricity (FCe-) project coordinated by the institute, drew from synthesized analyses from faculty members and other researchers using only the “most competitive sources of new electricity generation.”

“These are complex, interrelated issues that cannot be adequately addressed from one perspective,” Energy Institute Director Tom Edgar said. “We assembled a cross-disciplinary team to provide a fuller understanding of these costs and their policy implications.”

A holistic approach was used to investigate the key factors affecting the total direct/indirect costs of generating and delivering electricity, resulting in a series of white papers that assess and examine various electric power system options.

Researchers categorized the U.S. electricity system into three principal components: consumers, generation technologies and the wires/poles/storage/other hardware required to connect end users and generators. The interaction between the three components was reviewed, along with the costs often considered external to the electricity system, such as environmental effects and public health effects.

To research power generation costs, data was collected from existing studies to enhance the levelized cost of electricity (LCOE) formula. In addition to including public health impacts and environmental effects, typically not included in the LCOE, data was collected to calculate county-specific costs for each technology. The team also developed online calculators that allowed stakeholders to discuss the cost implications of policy actions associated with new electricity generation.

Lead author Joshua Rhodes, a postdoctoral research fellow at the Energy Institute, said the cost estimates are based on a series of assumptions that researchers debated at length.

“We think our methodology is sound and hope it enhances constructive dialogue,” Rhodes said. “But we also know that cost factors change over time, and people disagree about whether to include some of them. We wanted to provide an opportunity for people to change these inputs, and the tools we’ve created allow for that.”