Natural gas cash and futures prices started October on a positive note as robust export demand and strong power burns kept prices afloat even with a cooler turn of the weather. Due to the change of month, trading for the week only covered the Sept. 30-Oct. 1 period, where NGI’s Weekly Spot Gas National Avg. climbed 38.0 cents to $5.150/MMBtu. 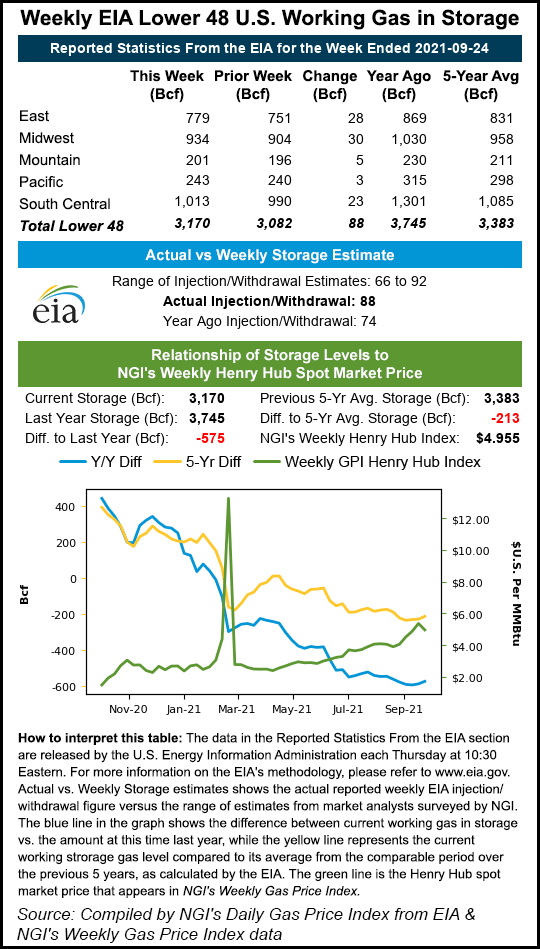 Nymex futures, meanwhile, struggled to disconnect themselves from global markets. Supply shortage fears were on full display this week in Asian and European markets, boosting prices to record levels. Despite an improving supply picture in the Lower 48, though, U.S. gas prices followed suit. The November contract spiked to an intraweek high of $6.318 but eventually slid to $5.619 at the end of the week.

As for the cash market, strong power burns continued despite the end of the summer. Even with a drop in temperatures, gas continues to capture a large share of total generation. Tudor, Pickering, Holt & Co. analysts said coal continued to lose share through September. Weekly data suggests coal production has risen in the past two weeks, “but with an enticing global market, we suspect the export picture to remain a key factor amidst a total global energy market.”

Price gains for the October 1-4 delivery period were substantial in the Rockies, where Kingsgate was up 76.0 cents week/week to average $3.180.

In California, PG&E Citygate jumped 24.0 cents to $7.065 in Thursday and Friday trading, while upstream in the Permian Basin, Waha gas averaged 65.0 cents higher on the week at $5.180.

Similar increases were seen in the Midwest, where Chicago Citygate spot gas prices averaged $5.340, up 66.0 cents on the week.

The East Coast was a mix of gains and losses, with Algonquin Citygate tumbling 60.5 cents on the week to average $3.745 and Eastern Gas South picking up 9.0 cents to average $4.090.

In a week marked by massive price swings to both sides of the ledger, natural gas futures ended the week not too far off from where they started. The November contract, in its debut week at the front of the Nymex curve, proved resilient in the face of otherwise bearish fundamentals in the Lower 48. The prompt month settled Friday at $5.619, up 8.7 cents from Monday.

The increase comes in spite of what is expected to be a spate of mild weather across the country. Any heat is seen relegated to the West and parts of Texas, and even then, temperatures are not expected to be close to the record highs experienced earlier in the summer. Cold weather, meanwhile, has yet to show up in weather models, instead reflecting a mild fall pattern unlikely to induce much heating or cooling demand.

The firm’s view is based on where storage levels appear headed, along with what it expects to remain a bearish weather pattern heading into the back half of October, “if not until at least early November.”

The storage picture in the United States has made quite the turnaround in a matter of weeks, and looks to improve even further given the mild temperature outlook.

That said, the multi-week span of comfortable weather is expected to result in meaty builds in the final weeks of the traditional injection season. Early estimates for the next EIA storage report are easily topping 100 Bcf, with some projections as high as 120 Bcf.

Given the quickly improving storage picture, end-of-season estimates have risen from less than 3.5 Tcf just a few weeks ago to more than 3.6 Bcf today.

The streak of bearish year/year weather-adjusted inventory comparisons appears likely for the next several weeks, and yet it is difficult to fathom an end-of-October inventory level materially higher than 3.6 Tcf, according to Mobius Risk Group. In its estimation, the winter will likely start with somewhere between 3.5 and 3.6 Tcf in the ground.

“While this is near the level market participants predicted back in the spring, we doubt many pundits had $5.00 pricing penciled into their estimates for the fall,” Mobius said.

Meanwhile, export demand is fierce and expected to climb further from here. Asia and Europe continue to price gas at record levels ahead of the winter as they work to attract supplies in an effort to avoid an energy shortage.

Cheniere Energy Inc. and Calcasieu Pass both have liquefied natural gas (LNG) facilities scheduled to come online during the next few months — a perfect time to capitalize on the sky-high prices that are expected to mount even further gains as cold weather sets in.

“What matters is how long it takes for freezing temperatures to arrive across Europe and the United States,” said NatGasWeather.

Models suggest it could be November for both regions, thereby suggesting winter cold could be slow to arrive. “This will need close watching since the longer it takes for cold to show up in the weather maps for Europe and the U.S., the more likely prices ease off.”

Spot gas prices were a mixed bag on Friday for weekend through Monday delivery as numerous weather systems were moving across the Lower 48.

One system is over the Northwest, two different ones are over the Plains and a fourth is over New England, NatGasWeather said. Temperatures with these systems are forecast in the 50s to 70s, although some warmer weather was expected in Texas and the southern Plains. The rest of the U.S. remains nice to warm with highs of 60s to 80s besides locally hotter 90s California and Southwest deserts, according to the forecaster.

Louisiana markets also landed in the black, with Henry Hub edging up 3.0 cents to $5.575 for the three-day gas period.

Those small increases were overshadowed by hefty losses on the East Coast.