Major utilities across the United States are paying more for natural gas-fired generation, and they are passing the higher cost on to consumers. 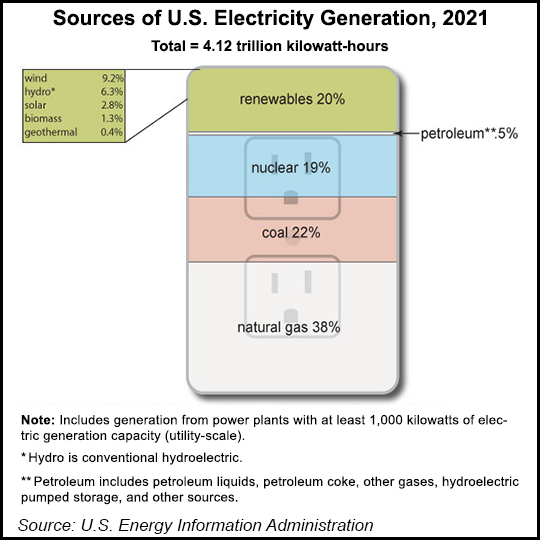 Earlier this month, the American Gas Association (AGA) reported that U.S. domestic gas demand averaged 68.8 Bcf/d in May, up 3.5% year/year. AGA attributed most of the additional demand to power burn, adding the metric was up 9.1% from 2021.

Consolidated Edison Company of New York Inc., aka ConEd, said it “expects bills to be higher than they were last summer due to higher supply costs, which are affecting energy customers across the United States, and a delivery rate increase the New York State Public Service Commission approved in 2020.”

The company attributed the bulk of its higher electric supply costs to rising natural gas prices. The utility “buys power on the market from generators and provides it to customers at cost.”

In Westchester County, NY, the average ConEd residential customer using 500 kWh/month should anticipate a $153.79/month average bill from June-September, up 15.6% from $133.02 last year, the utility said.

Entergy Corp., which last year relied on natural gas to generate more than 40% of its electricity, earlier this month told its Louisiana customers to prepare for higher bills via a fuel adjustment increase.

“Higher natural gas pricing is a factor that our customers should account for in their budgeting through the summer,” Entergy Louisiana’s customer service vice president Yovanka Daniel said in an open letter to customers.

Daniel noted that natural gas prices in April “were more than double those in April of 2021 and three times higher than April 2020.”

A customer using 1,000 kWh/month would see an increase of about $25 on the June electric bill, but the company would temporarily defray the extra charge, said Daniel.

Daniel said Entergy Louisiana would keep the fuel adjustment on customers’ bills through the summer “and until there is some relief on this commodity pricing.”

“Our electric and gas utilities purchase fuel at the best possible price and then pass this cost directly to customers – customers pay what we pay,” spokesperson Bill Norton told NGI. “We regularly review and, when necessary, seek to adjust what we bill customers in the states we serve based on the cost of fuel.”

If NCUC were to OK the request, a typical residential bill for 1,000 kWh/month would go up 6.6% in January to $112.28, according to Duke. Bills for commercial and industrial customers would be 9.3% and 9% higher, respectively, in January.

“We’re always considering how to soften the impact on customer bills,” said Norton. “Our priority is to purchase energy at the best possible price  and aggressively manage operations and maintenance in the most cost-effective manner for our customers.”

If CPUC approves the rate case, which would take effect in 2024, the average residential customer’s monthly electric bill would be about $9.00 higher year/year, said SDG&E. The utility added that the average monthly natural gas bill would go up $9.60 year/year. SD&GE expects CPUC’s to decide on the proposal in late 2023.

The Houston Electric subsidiary of CenterPoint Energy Inc. in April applied for an interim rate adjustment with the Public Utility Commission of Texas (PUCT). The utility said the adjustment would enable it to recover more than $1.6 billion in distribution system improvement capital costs incurred from 2019-2021.

“The interim rate adjustment provides our customers with smaller adjustments in their rates over time versus a large one-time rate adjustment,” said Houston Electric’s Senior Vice President Lynnae Wilson. The measure would allow CenterPoint “to recover costs for the investments necessary to maintain reliable service in between general base rate proceedings.”

To be sure, the outage at the Freeport liquefied natural gas (LNG) export terminal in Texas caused by last week’s explosion has bolstered the domestic gas supply outlook. With feed gas otherwise destined for the export market staying in the United States, domestic gas prices have been trending downward.