Natural gas trading volumes soared 9.4% higher last year than in 2014, likely because of continued increased production, the retirement of coal-fired electricity generators, and a probable increase in consumption because of lower prices, according to an analysis by Natural Gas Intelligence (NGI) of 2015 Form 552 buyer and seller filings with FERC. 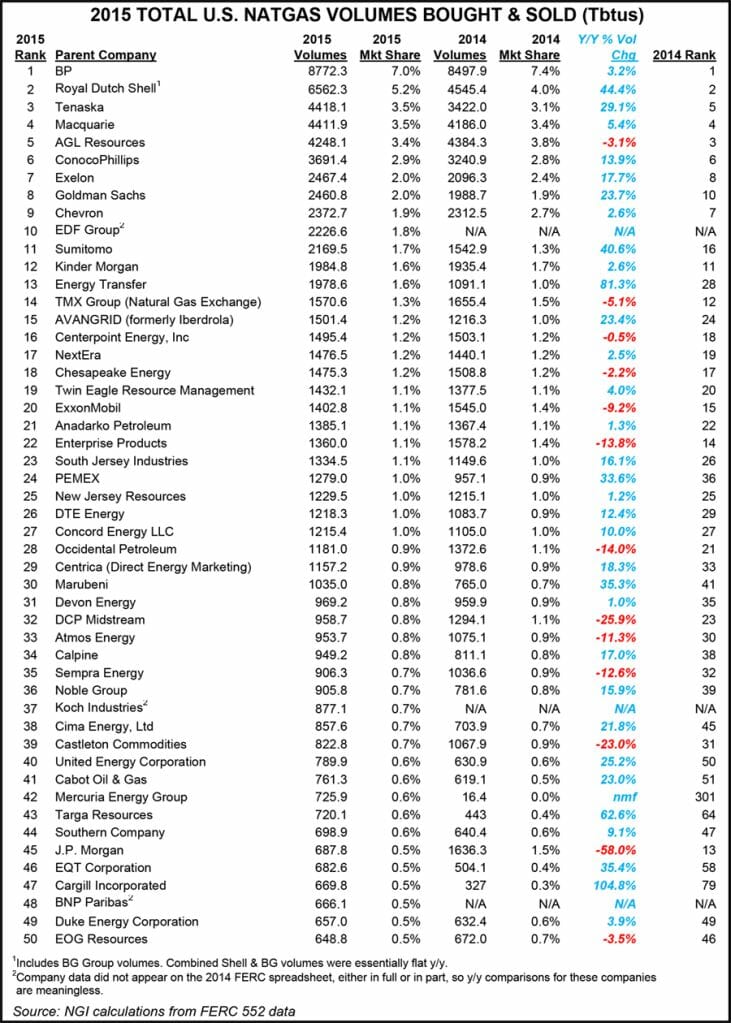 Total volumes bought and sold increased for the first time in four years, reaching 125,386 TBtu, compared with 114,603 TBtu in 2014 (see Daily GPI, May 28, 2015), according to NGI‘s analysis. It was the highest single year on record since the Federal Energy Regulatory Commission began publishing Form 552 data seven years ago (see Daily GPI, July 6, 2009).

“About a third of the increase is companies that didn’t report in 2014,” said Patrick Rau, NGI director of strategy and research. “There were several more recorded entries this year than there were last year. The rest of it is probably largely the result of lower prices. You saw pretty good increases across the board in every category except midstream, and that makes sense, particularly if there’s less gas processed most likely because wet gas drilling was down.

“But there were healthy increases for electricity generation, as you can imagine, with coal-fired plants retiring and just low prices means that probably more gas got burned relative to coal. Maybe more interesting is that there were quite big increases in volumes for both marketers and financial trading companies — companies that tend to live on volatility.” That includes firms like Goldman Sachs and EDF Group, which were both in the Top 10 this year.

“The whole financial trading sector and the marketing sector, their volumes are up by a healthy amount, and they’re the one’s who’ve really led the increase,” Rau said. “It’s interesting because volatility at the Henry Hub is still low. It’s been declining and it declined last year. So this tells me we may be seeing more regional volatility throughout the country.”

Industrial end-user demand was up almost 18%, and utility volumes were up nearly 10%, likely the result of lower prices. Producer volumes, the largest sector of the market, increased about 2%.

In its analysis, NGI pooled information so that each company’s total includes data from subsidiaries. This was done to give a more complete picture of parent company activity. NGI‘s analysis covers data taken directly from a spreadsheet located on FERC’s website, with a single exception: Energy Transfer (No. 13, with 1,979 TBtu and 1.6% market share) data were added to the FERC roundup data.

The NGI survey ranks marketers on sales transactions only. FERC, in its Form 552 tallies both purchases and sales.