Going into March Bidweek, natural gas traders were in something of a quandary at the end of February as much of the country was still firmly within the grasp of Ol’ Man Winter, but at the same time weather and temperatures could change substantially by the end of March. For the most part, traders took a tempered approach to bidweek purchases and were content to focus on an anticipated milder temperature regime for the back half of March. 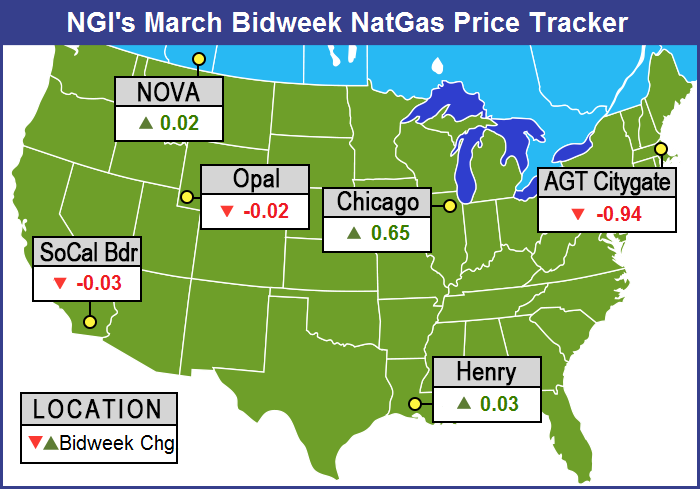 With the exception of a few portions of the country, bidweek trading for March saw prices remain within about a nickel of unchanged. The NGI March Bidweek National Average fell 13 cents from February to $3.10. The $3.10 national average represents a 47% decrease, or a $2.74 drop from NGI‘s March 2014 National Bidweek Average of $5.84, further confirming the belief that this year’s winter was no match for the country’s natural gas production glut and robust storage inventories.

The Northeast and Midwest saw the greatest change in individual market points, with Transco Zone 6 New York dropping $4.03 to average $5.57 and gas at Dawn making the greatest gain of $1.21 to average $4.24.

Regionally, the Northeast turned out to be the weakest link, dropping 74 cents to average $3.58 and the Rocky Mountains lost a nickel to $2.61. California bidweek quotes came in a penny lower at $2.86.

On average, points in the Midcontinent were up by 13 cents to $2.88 and bidweek quotes in the Midwest proved to be the big winners, adding on average 71 cents to $3.75.

March futures expired at $2.894, up 2.8 cents from the February futures settlement.

By the end of bidweek, the market was sending out mixed signals. “I don’t have a very good read on bidweek trading. It has been all over the place,” said a Houston-based trader working the Chicago markets. “I don’t know if people are thinking prices are low and are going to go up the first 10 days with the cold weather, but I would not want to be grabbing length right now. I think people will take the [spot market] pain for the first couple of days, but later in the month will be in good shape.”

A Michigan marketer said he bought only a small amount of index gas, just what they needed to supplement basis purchases made in the fall. “I think we have made it through the worst by getting data from customers and figuring out what their hourly rate is. We have storage but you can only take it out at what the operators allow otherwise you pay a big penalty.”

“Good shape” will typically depend on which side of the market you are on and, if a leading industry consultant is correct, the recent cold weather and drawdown of inventories may have put sellers in “good shape.”

“It looks like mother nature is going to save the natural gas market once again from a complete train wreck to the downside in prices. We are having a colder than 10-year-normal winter, which has caused total weather related demand to be about 2.5 Bcf/d stronger than normal,” said industry consultant Genscape in a report.

“Overall estimates for end of season working gas storage are around 1.5 Tcf. This is much lower than the original estimates at the beginning of the winter season of around 1.75 to 1.85 Tcf. On average, total demand this winter is very close to that of last winter. However, we are withdrawing approximately 5 Bcf/d less than last year’s winter from storage. This is due to production being about 5 Bcf/d higher according to our Spring Rock production estimates.”

If Friday’s spot market trading is any indication of what lies ahead for March, gas buyers may be the ultimate winners. Losses were deep and wide at the conclusion of physical market trading for Sunday and Monday delivery.

Although temperatures in many markets were still expected to be well below normal, traders found little appeal in committing to a two-day deal with hints of weather moderation in the air. No points traded in positive territory, and the best the market could do was a loss of a dime at a thinly traded South Texas storage facility. The Mid-Atlantic fell by double dollar-digits, and losses at New England points were right behind with single dollar-digit losses. The overall market loss was a $1.74 to average $3.18.

In the Mid-Atlantic, Sunday and Monday gas had the trajectory of a safe falling from a 10-story building as weather forecasts made a giant leap warmer over the weekend and into next week. Temperatures were still below seasonal norms, but the trend was higher. AccuWeather.com forecast that the high in New York City Friday of 30 degrees would ease to 29 by Saturday but bounce to 42 Monday, just 3 degrees short of the seasonal norm. Philadelphia’s high Friday of 30 was likewise forecast to slide to 29 Saturday and reach 41 on Monday. The seasonal high in Philadelphia is 47. Washington, DC’s Friday maximum of 34 was seen sliding to 31 Saturday before leapfrogging to 46 on Monday. The normal early March high in Washington is 51.

Marcellus points saw some sub $1 quotes as double-digit declines were common. On Tennessee Zone 4 Marcellus gas for Sunday and Monday delivery fell 39 cents to 98 cents, but not before posting a low trade of 86 cents. On Millennium, gas was seen 48 cents lower at $1.32, and gas on Transco Leidy lost 37 cents to $1.05. Packages on Dominion South were quoted 54 cents lower at $1.92.

AccuWeather.com reported that “temperatures are not forecast to be quite as extreme heading into the first week of March, giving folks across the regions a break from the bitterly cold arctic air.”

AccuWeather.com meteorologist Brett Anderson said, “Indications are the pattern will change next week so that the cold is much less severe from the Midwest to the Northeast. This will still yield temperatures 5 to 15 degrees below normal. Despite staying below normal, this is still a significant difference from around the middle of February when temperatures from Minnesota to Massachusetts ran 15 to 30 degrees below normal.

“After a winter storm slides across the Midwest and Northeast this weekend, another storm system will affect the regions during the first part of next week. Unlike the storms that tracked across the regions during February, this upcoming storm is expected to track farther north. As a result, temperatures will climb well above freezing across the Ohio Valley and along the Interstate-95 corridor. Farther south, some people may come down with a case of spring fever as highs could top out in the 80s in parts of Georgia and Florida.”

The colder-than-normal weather outlook changed little overnight. MDA Weather Services said, “Changes were relatively minor in this [six- to 10-day] period as the cold pattern of late continues through the first week of March. This cold continues to be driven by the strong northern and eastern Pacific ridge and the displaced polar vortex, and much below normal readings will remain widespread from the central Rockies to the Northeast.

“The strongest cold is seen early in the central U.S., and the arctic air mass supporting this cold presses eastward into the mid-period. Only the South features ‘aboves’ early on before turning colder thereafter. The West is also cold but moderating in the second half.”

That cold is making short positions in natural gas futures tough to handle. In Friday’s trading April and May managed modest 3-cent gains. “Downside price follow through is still being limited by unusually cold temperature trends that are now being extended out to about March 13th in most cases. Until these forecasts normalize or show some evidence of mild trends, downside price follow through could prove arduous,” said Jim Ritterbusch of Ritterbusch and Associates.

“We are maintaining a bearish trading bias while at the same time conceding that it has been difficult to maintain a short position amidst occasional stronger than expected weather inspired price up spikes. But, in any event, we will continue to advise working the market strictly from the short side, preferably on temperature driven rallies back up to around yesterday’s highs of around $2.88.

“The gas rig count according to Baker Hughes dropped 9 to 280, a decrease of roughly 3%. The gas rig slippage has not been a critical item and has generally left year over year production gains of around 3.5% largely intact in looking across this year,” said Ritterbusch. “Since most of this gain will be jammed into the first half of this year, we will continue to prioritize the production factor as primary driver of price once this month’s extraordinary cold spell finally runs its course. All in all, $2.50 remains as high probability.”

Amen to the production factor. On Friday the Energy Information Administration reported December gross production from the Lower 48 increased a whopping 1.7 Bcf/d to 83.03 Bcf/d. This is a stout 10.50 Bcf/d higher than a year ago.