Natural gas futures treaded water for much of Thursday, not even blinking when the latest storage data painted an increasingly bleak demand outlook. Instead, the rapid pace of falling production grabbed traders’ attention, while some short-covering also likely came into play. The May Nymex gas futures contract settled at $1.686, up 8.8 cents from Wednesday’s close. June shot up 9.7 cents to $1.845. 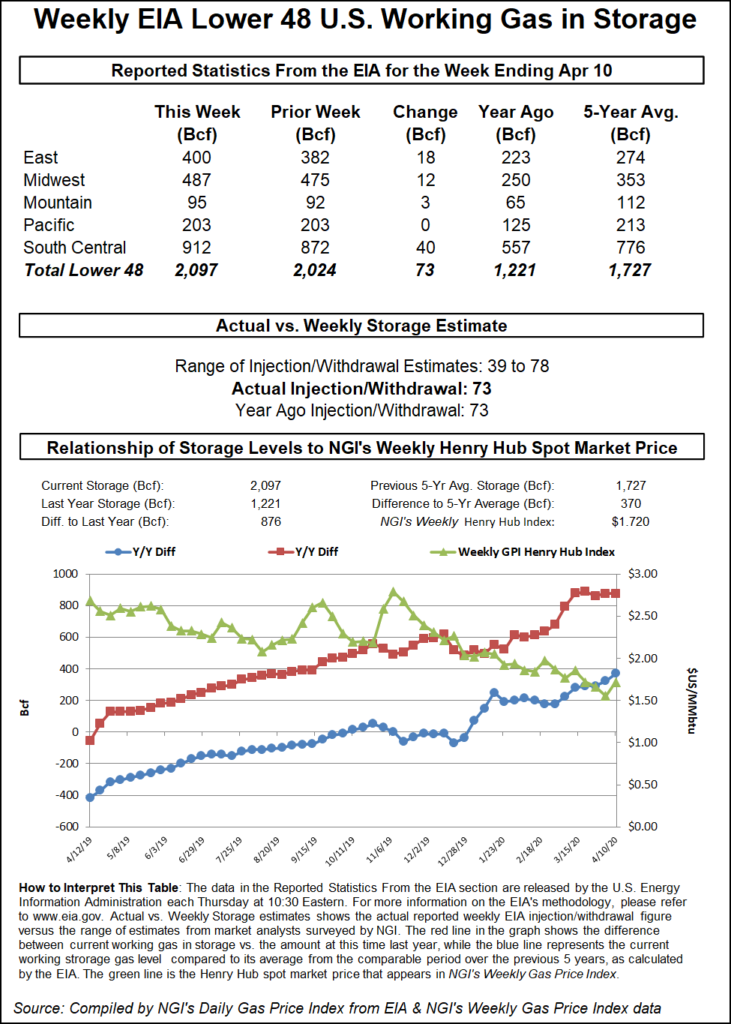 For most of the day, Nymex futures tiptoed into negative territory as weather models generally maintained the chilly pattern for the next few days before a milder setup was to emerge over the Lower 48. However, a much bigger splash into the deep end was expected when the U.S. Energy Information Administration (EIA) reported a monster 73 Bcf injection into storage inventories for the week ending April 10. The figure was on par with last year’s build for the similar week, but it crushed the 27 Bcf five-year average.

Meanwhile, the 73 Bcf build was within the exceptionally wide range of expectations, but bested the lowest projection by a whopping 34 Bcf.

“After last week’s number, we revised all of our projections higher, as we simply were not capturing the demand destruction enough, and we have had to do the same after this number,” Bespoke Weather Services said.

The supply/demand balance is “just obscenely loose,” according to Bespoke, which indicated that the balance of the last two weeks suggests an “impossible” 5.2 Tcf at the end of the season. “Something will have to give, or each month will just get pushed lower once becoming prompt month.”

Broken down by region, the South Central region led with a 40 Bcf injection into storage, including 21 Bcf into salt facilities and a 19 Bcf build into nonsalts, EIA said. East inventories rose by 18 Bcf, and the Midwest added 12 Bcf. The Mountain region injected 3 Bcf, while Pacific stocks stayed flat week/week.

Despite the bearish storage stat, Nymex futures initially bounced off earlier lows. From there, the May contract continued to strengthen and moved back into positive territory by midday despite little change on the weather front. The prompt month went on to settle Thursday in the upper end of its 16-cent trading range.

Bespoke said the move higher looks similar to previous instances when prompt-month prices dipped into the $1.50s, as they keep finding “solid technical support at those levels.” With a bullish curve structure, the prompt month is able to take off.

“We have seen these rallies last two to three days, so it is possible that the market still pushes higher Friday, but unless we see some definitive signs that the balances will be tightening soon, via production cuts or by virtue of the economy really reopening, it is likely that any further rallies from here will ultimately meet selling pressure once again.”

With the relaxing of coronavirus-related shutdowns and stay-at-home orders not yet known, the supply side of the equation is starting to come into focus. Tudor, Pickering, Holt & Co. (TPH) analysts said the last two days of flow data showed total U.S. gas production down around 1.5 Bcf/d, “which could indicate the first signs of a break in U.S. gas supply.”

Although the usual caution applied, the TPH team said the drop in gas volumes has been driven primarily by the Northeast and Texas, with both showing 0.75 Bcf/d declines, although the Northeast move could be partially because of midstream outages.

“That said, we’ve confirmed with multiple operators now that condensate is becoming a significant issue, and it’s being reflected in local pricing, with Utica Shale condensate currently trading in negative territory,” TPH analysts said. The firm plans to continue tracking daily data to determine whether this could be the beginning of what it said could be a 6-7 Bcf/d drop in gas supply.

Criterion Research LLC energy market analyst James Bevan said his firm is expecting U.S. gas production to drop 4.8 Bcf/d between April and December, bringing volumes from 90.9 Bcf/d to a year-end 86.1 Bcf/d. The projection may get revised as “first quarter earnings start to paint a clearer picture of what producers are doing. The big region everyone is watching is the Permian Basin, as varying outlets are projecting associated gas drop-offs as high as 5 Bcf/d this summer.”

Criterion’s total South Central outlook remained “moderate” for now, and the firm sees production in the South Central and Gulf of Mexico having stabilized after the late-March decline, with volumes holding within a range of 44.8 Bcf/d and 45.3 Bcf/d.

“Our South Central production forecast would have volumes drop 2 Bcf/d between April and December. However, accelerated shut-ins in the Permian present risk, and we could see volumes drop faster since virtually every week of the last two months has brought unprecedented news or a record-breaking number for oil and gas companies.”

Losses were prevalent across U.S. cash markets, but the Northeast posted the largest day/day decreases despite the chilly conditions currently in the region.

The National Weather Service said low pressure over the Central Plains was to move slowly into the Middle Mississippi Valley by early Friday and to the Northern Mid-Atlantic Coast by Saturday. As this system moves eastward, unseasonably cold air to the north would allow for “a stripe of light to moderate wet snow from Nebraska to parts of the Northeast by Friday evening.”

Upward of eight inches could accumulate across the higher elevations of northern Pennsylvania, with three-to-six inches of snow possible across parts of Upstate New York and western Massachusetts, according to the forecaster.

The expected bump in demand from the weather system failed to spark any renewed momentum in cash trading, and in fact, did the opposite. Tenn Zone 6 200L next-day gas plunged 30.5 cents to $1.575.

Most other areas of the United States posted decreases of no more than 10 cents or so, but the West Coast saw slightly more pronounced downside in Thursday trading. PG&E Citygate next-day gas was down 16.0 cents to $2.200.