While a legislated drilling ban prevents production, natural gas will stay a consumption mainstay in Quebec through 2030 under a “dual energy” program that includes a subsidy for households that add electric heat appliances to their fossil fuel furnaces. 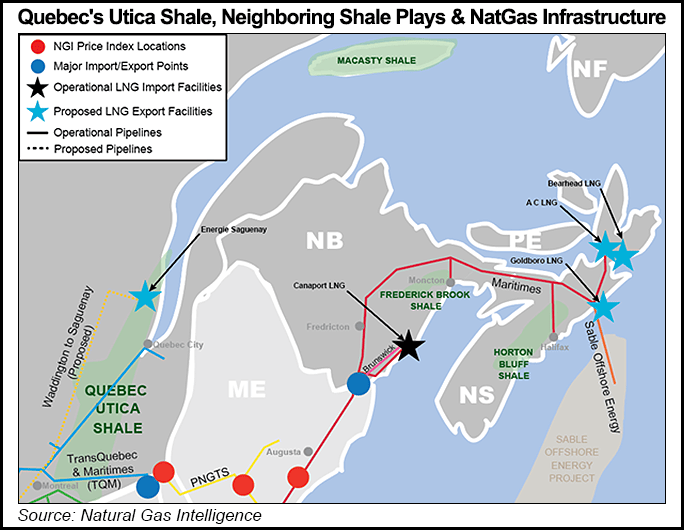 When the utilities began signing up residential dual-energy customers this month, the government announced an initial C$158 million ($126 million) grant commitment to cover their costs of hardware that enables heating source switching.

“It’s a way of using the right energy source at the right time and at the lowest possible cost,” said an announcement delivered by government cabinet ministers and utility company executives at a popular aquarium that successfully tested the equipment.

The dual energy program figures in a Quebec greenhouse gas (GHG) reduction policy titled 2030 Plan for a Green Economy. The policy calls for a 50% emissions cut by the end of this decade and complete carbon neutrality as of 2050.

“This solution will go a long way to electrifying the heating of buildings and reducing GHG emissions . . . while avoiding an increase in electricity demand during peak periods when natural gas will be used instead,” said the announcement.

With global fossil fuel price inflation currently making electric heating competitive, the dual energy program sets targets of 100,000 conversions, or nearly one-fifth of Energir’s 535,000 customers, and a 70% cut in gas use by the converts.

The predicted environmental result of hitting the conversion target would be an annual GHG emissions reduction of 540,000 tons, which is estimated to be equivalent to eliminating 125,000 fossil-fueled motor vehicles.

The dual energy program would also relieve forecast strain on government-owned Hydro-Quebec that has been forecast to be generated from another aspect of the French Canadian green new deal: mandatory switching to electric vehicles.

The Montreal Economic Institute calculates that recharging batteries for the 5.4 million personal vehicles and 823,000 trucks on the province’s roads would drain Hydro-Quebec’s power surplus earmarked for increasing exports to the United States.

The groups estimated that compensation for lost gas distribution volume by Energir that Hydro-Quebec would obtain with power rate hikes plus heat supply conversion expenses could cost consumers C$7.2 billion ($5.8 billion) by 2050.

A government compensation offer that accompanied enactment of the Quebec drilling ban in April restricts total payments to C$100 million ($80 million) to cover five firms’ exploration spending since 2025 and costs of sealing and reclaiming their wells.