Liquefied natural gas (LNG) production outages broke records last year and combined with upstream underperformance to limit supplies and tighten the global market in a way that could worsen over the coming years, the International Energy Agency said Monday. 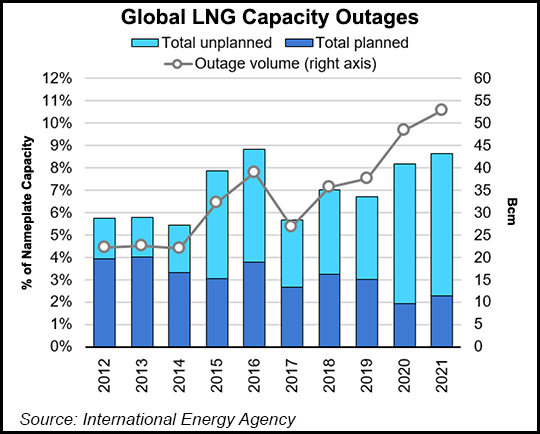 The total LNG volume lost to planned or unplanned outages was 53 billion cubic meters (Bcm) in 2021, which is the equivalent of nearly 9% of the world’s nameplate capacity and represents a 44% increase on the 2015-2020 average, IEA said in its latest quarterly natural gas market report. About half of the LNG volumes lost to unplanned outages in 2021 were due to upstream issues that limited feed gas availability, with the most severe incidents occurring in Nigeria, Trinidad and Tobago, and Malaysia.

Pandemic-related maintenance disruptions caused some issues, but the IEA said efforts to curb natural gas demand to meet emissions targets are falling short. “Gas supply adequacy could emerge as a concern for the medium term,” the agency said.

IEA said that while upstream natural gas spending hit a low point of just over $100 billion in 2020 amid the Covid-19 outbreak and more capital discipline, it only showed a modest increase of 10% last year. That’s lower than what IEA projects is needed to hit net-zero emissions levels by 2050 and other governmental energy targets across the world.

The agency also warned that LNG project delays could further limit supplies in the coming years. IEA noted that of the roughly 190 Bcm of nameplate liquefaction capacity under construction in early 2021, about 20% was ahead of schedule, 35% was on time and 45% was delayed by an average of 14 months. Delays are “especially pronounced for projects that were initially targeting full capacity by 2024, including LNG Canada, Mozambique LNG and Golden Pass LNG in the United States,” IEA said.

Will Natural Gas Consumption Grow in 2022?

IEA said global natural gas demand jumped by 4.6% in 2021, more than double the decline seen in 2020 as pandemic restrictions were lifted. The agency is currently forecasting a slower growth rate of 0.9% this year as some of the post-lockdown momentum eases.

The agency said that the global gas trade, or LNG and long-distance pipeline flows combined, grew by more than 9% last year, the largest year/year increase on record. The jump was largely driven by strong demand recovery in key gas-importing regions, such as the Asia-Pacific, Europe, and Central and South America.

Global LNG trade expanded by 6% year/year in 2021. The import growth was led by the Asia-Pacific region. China’s imports recorded a strong 17% increase, overtaking Japan for the first time in 2021 as the world’s largest LNG importer, IEA said. This year, global LNG trade growth is projected to slow to 4% as “the demand expansion in Asia during 2021 moderates and the drought-driven rise in South American imports reverses,” IEA said.

North America will continue to dominate LNG export growth in 2022, the agency added. The continent accounts for more than 75% of the projected net increase in global LNG supply as the Calcasieu Pass terminal and the sixth train at Sabine Pass LNG are expected to come online.

European LNG inflows are expected to be elevated in 2022, however, as the continent will need to refill low storage inventories after winter. IEA added that the direction of short-term demand will largely depend on the remainder of the winter heating season in the Northern Hemisphere.

“The current market situation is a stark reminder for gas-consuming countries of the importance of implementing and updating their security of supply toolboxes, including policies to protect consumers and to optimize the use of gas infrastructure, especially storage,” IEA said. 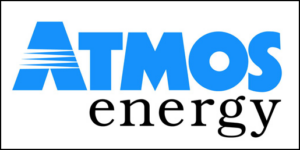