Decarbonizing natural gas consumption is considerably more complex than doing so for electricity, but U.S. gas suppliers are up for the challenge, industry players said this week. 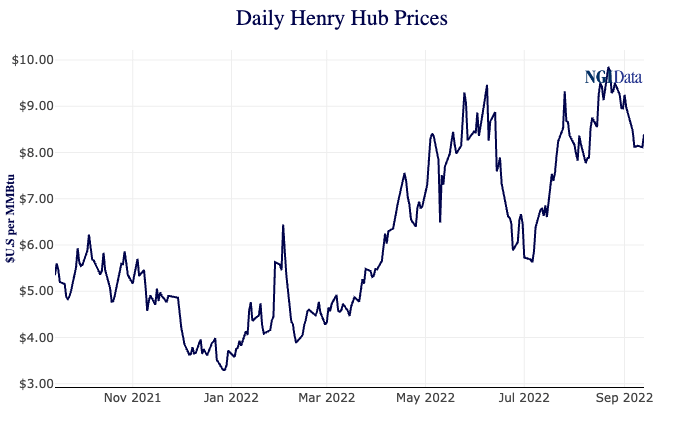 The ultimate goal to neutralize the climate-warming impact of natural gas is large-scale deployment of low-carbon hydrogen, along with carbon capture, utilization and storage (CCUS), said BP plc’s Mark Aufmuth, managing director for low carbon and cross commodity origination. However, these technologies are still in the emergent phase.

In the meantime, “gas consumers could consider incorporating some bridge products into their gas procurement strategies,” Aufmuth said at LDC Gas Forums’ Mid-Continent Forum in Chicago.

The bridge products include renewable natural gas (aka RNG or biogas), certified or differentiated gas and carbon offset natural gas.

The use of these products “could show stakeholders that you are engaged in planning for the energy transition that is already underway,” Aufmuth said. RNG refers to naturally occurring methane captured from sources including landfills and dairy farms, which is then cleaned up and injected into the natural gas supply network. Certified gas denotes pipeline gas with an independent, third-party accreditation of a producing facility’s methane emissions intensity.

Southern Company’s Christa Markgraff, vice president of gas operations, told NGI on the sidelines of the forum that the utility is pursuing certified gas procurement across all of its jurisdictions. Through its subsidiaries, the Atlanta-based firm supplies natural gas to 4.3 million customers in Illinois, Georgia, Tennessee and Virginia, along with gas marketing services in California, Georgia and Texas.

“I don’t think it’s a challenge,” Markgraff said. “I think it’s more of an opportunity to rally the entire industry around ensuring that we have consistent, credible and transparent measurements” of methane.

As for RNG, “we want to put our toe in the pool and we want to be able to integrate RNG into our distribution systems,” Markgraff said. Southern Company in 2021 acquired the Meadow Branch Landfill Methane Recovery Facility in Athens, TN, part of a larger effort to achieve company-wide net zero emissions by 2050. Subsidiary Nicor Gas also is ramping up efforts to incorporate RNG into its Illinois distribution network.

Toronto-based Enbridge Gas Inc., meanwhile, is advancing the RNG market in Ontario, said Hilary Thompson, director of storage and transportation business development. Seven RNG projects are slated to begin injecting gas into the Enbridge Gas distribution system over the next year or so. Much of this RNG will make it into the Dawn storage hub and be available for trading, Thompson said.

At What Price Is RNG Or Certified Gas?

Aufmuth said RNG currently adds an estimated $18/MMbtu or so to the commodity cost of natural gas. He noted that biogas generates regulatory credits when consumed as a transport fuel, making it costlier for non-automotive gas buyers to purchase.

“RNG prices can be quite volatile, with regulatory programs by and large driving supply and demand balances,” Aufmuth said.

BP is aiming to mitigate this volatility with long-term, fixed-price RNG supply contracts.

“Despite the increased costs, we have seen natural gas utilities, corporates and industrials begin including some amounts of RNG into their gas procurement strategies to lower the overall carbon intensity of their gas consumption and begin the journey to net zero,” Aufmuth said.

With regard to certified gas Authmuth said, “We believe that for natural gas to play its fullest part in the energy transition, methane emissions across the value chain will have to be significantly reduced.” He explained that BP is aiming to install methane measurement at all its major oil and gas processing sites by 2023, “publish the data, and then drive a 50% reduction in methane intensity of our operations.”

The certified gas market “is nascent, but it is growing,” Aufmuth said, citing a push by producers to differentiate the low methane intensity of their operations.BP estimates that a certified gas label adds about 3 cents/MMBtu to the commodity price of natural gas, Aufmuth said. Other estimates have put it higher.