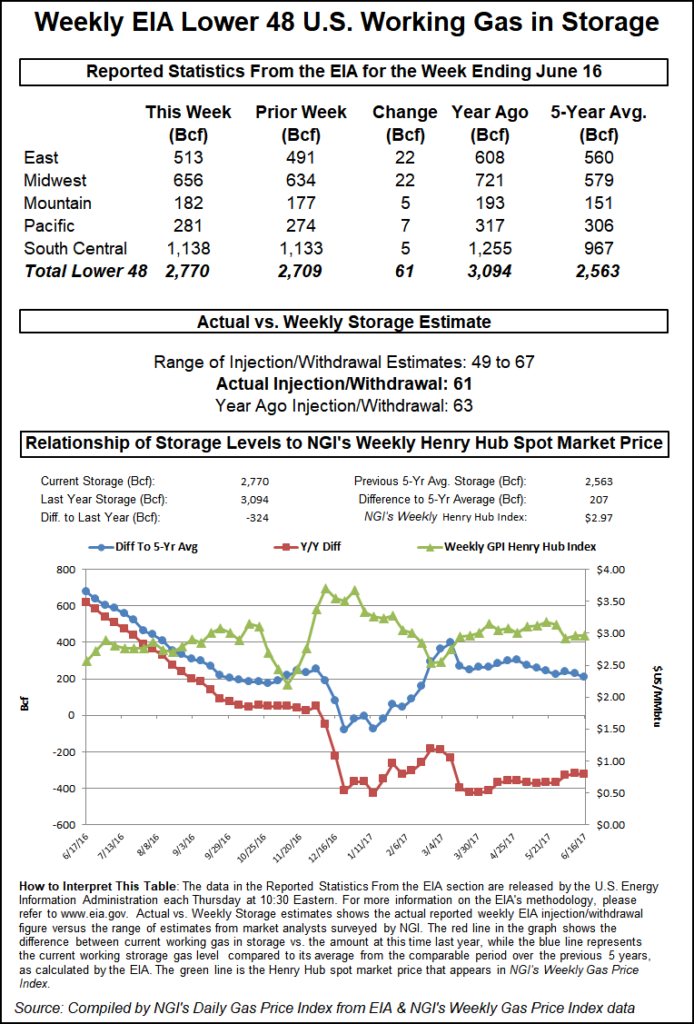 In the physical market, strong cooling demand drove day-ahead prices higher across much of the Midwest and East, with points along the I-95 corridor surging ahead of a potentially toasty weekend. The heat helped the NGI National Spot Gas Average tack on 13 cents to $2.75/MMBtu.

EIA reported a net 66 Bcf injection into Lower 48 gas stocks for the week ended June 22, on the leaner side of market expectations leading up to the report. Last year, EIA recorded a 48 Bcf injection, and the five-year average is a build of 72 Bcf.

But the otherwise-bullish injection figure in this week’s report came with an asterisk. EIA said a reported revision “caused the stocks for June 15 to change from 2,004 Bcf to 2,008 Bcf. As a result, the implied net change” from June 8 to June 15 increased to 95 Bcf, higher than the 91 Bcf build the agency published in last week’s report.

“Storage levels are now estimated to sit at 70 Bcf above where they were estimated at this time last week,” Bespoke said. “The print over the past week is supportive, indicating significant weather-adjusted power burn tightening we had observed. Yet this reclassification indicates that previously, when heat was not as strong, we were even looser than expected, and on a two-week basis are not tight.

“This data is not yet bearish, as burns remain tight, but as they loosen” and long-range heat tapers off “downside arrives.”

Indeed, the report seemed to temper the market’s enthusiasm for the August contract, which had gained momentum earlier in the morning, climbing above $3.01 in the minutes leading up to EIA’s report.

Prior to the report, the market had been looking for a build in line with the five-year average. A Reuters poll of 25 industry traders and analysts had produced a tight 64 Bcf to 76 Bcf injection range with a 71 Bcf consensus expectation.

Working gas in underground storage stood at 2,074 Bcf as of June 22, versus 2,809 Bcf last year and five-year average inventories of 2,575 Bcf. Week/week, the year-on-year storage deficit shrank from 757 Bcf to 735 Bcf, while the year-on-five-year deficit increased slightly from 499 Bcf to 501 Bcf, EIA data show.

By region, the largest weekly builds were reported in the East and Midwest, which each returned 24 Bcf to the ground. In the Pacific, 5 Bcf was injected, while 6 Bcf was injected in the Mountain region. The South Central — where the revision to last week’s inventories was reported — saw a net build of 7 Bcf for the week ended June 22, with a 13 Bcf injection into nonsalt offsetting a withdrawal of 6 Bcf from salt.

NatGasWeather said it viewed the revision to last week’s data as bearish, “especially when very few analysts were expecting anything higher than” a 90 Bcf build for that report. “Thus, a bullish miss was wiped out by a bearish revision due to strong production. So back into battle we go with bullish deficits and hot weather patterns versus very strong production.”

Forecasts Thursday “remained very hot” for Friday into next week “as strong upper level high pressure brings widespread heat to most regions of the country. This includes the important Midwest and Northeast regions as most major cities from Chicago to New York City reach the mid-90s for strong demand,” according to the firm.

After that, however, “recent data still favors at least some cooling arriving into the East July 8-12,” NatGasWeather said. “…With prices selling off after today’s storage report, it suggests the markets see the coming heat through next week as impressive, but potentially priced in, thereby now wanting the pattern to be a little hotter over the East July 8-12 to justify $3.”

Turning to the spot market, the Lower 48 is poised to see its highest power burn levels of the summer so far, according to Genscape Inc.

“A handful of Midwest and eastern pipelines have begun issuing imbalance warnings as power burns are expected to rise to summer-to-date highs in the coming days,” Genscape analyst Rick Margolin told clients Thursday. “Although near-term weather forecasts have cooled ever so slightly, the next few days are expected to feature the hottest temperatures of the summer. Consequently, our Daily S&D’s estimate of power burns — which uses a hybrid of Genscape proprietary monitored power plant generation and pipeline nominations — is showing Thursday’s burns at 33.1 Bcf/d, then rising to the summer-to-date high of 37.4 Bcf/d.

“Monday’s burns are forecast to get stronger, potentially reaching 38.4 Bcf/d,” Margolin said. “ANR and Dominion have both issued imbalance warnings to shippers in light of rising temperatures and demand.”

The biggest gains in day-ahead trading Thursday occurred in the Mid-Atlantic and Northeast. Forecaster Radiant Solutions was calling for highs in the upper 80s to mid-90s Friday and into the weekend along the heavily populated I-95 corridor, including Boston, New York, Philadelphia and Washington, DC.

In the Midwest, where Radiant was calling for well above normal temperatures across a number of major cities — including highs potentially in the triple digits in Chicago Saturday — spot prices continued to work higher Thursday.

Chicago Citygate added a nickel to $2.88.

On the supply side, Lower 48 natural gas production this week has retreated from a record high set Monday, according to data from Genscape.

“The largest drops are coming out of the East, Permian, Midcontinent and Rockies,” Margolin said. “East volumes are leading the declines, down 0.3 Bcf/d primarily due to lower output in northeast Pennsylvania on the Transco and” Tennessee Gas Pipeline “systems, and in Ohio due to a nearly 116 MMcf/d drop in gathering” on the Rockies Express Pipeline.

“Permian output is also down about 0.3 Bcf/d. All interstates in the Texas and New Mexico Permian sample are posting drops, with the largest occurring on” the El Paso Natural Gas pipeline in New Mexico along with Northern Natural Gas in Texas, according to Margolin. “El Paso continues to be plagued by operational problems in the area.”

Speaking of the issues on El Paso, the pipeline late Wednesday reported a mechanical failure at its Guadalupe compressor station, where a force majeure was already in effect on the pipeline’s 1100 Line, according to Genscape analysts Dan Spangler and Allison Hurley.

“The mechanical failure will force a further reduction of operational capacity through” the Guadalupe station “by an additional 123 MMcf/d — to a max capacity of 740 MMcf/d” starting Thursday, Spangler and Hurley said.

Before this restriction, flows through the point had already been cut to 863 MMcf/d since June 18, about 90 MMcf/d below the prior 14-day average, according to the firm. The earlier force majeure on Line 1100 is expected to remain in effect until July 3 between the Guadalupe and Cornudas stations.

Day-ahead deliveries in West Texas, where points were already trading more than $1 back of Henry Hub amid ongoing takeaway constraints out of the Permian Basin, were mixed Thursday. El Paso Permian fell a penny to $1.75, while Transwestern added 11 cents to $1.86.

In the West, California prices were mixed, with the volatile SoCal Citygate moving opposite the rest of the region as other points downstream of the El Paso disruption in West Texas gained on the day. SoCal Border Average tacked on 12 cents to $2.56, while in Arizona/Nevada El Paso S. Mainline/N. Baja jumped 25 cents to $2.64.

Upstream in the Rockies, points bounced back from Wednesday’s widespread declines. Kern River added 33 cents to $2.21.