Natural gas cash prices moved higher for the short week from June 1-4 despite mostly moderate weather keeping a lid on demand in much of the country. Heat out West led the gains, sending NGI’s Weekly Spot Gas National Avg. up 11.5 cents to $2.800/MMBtu. 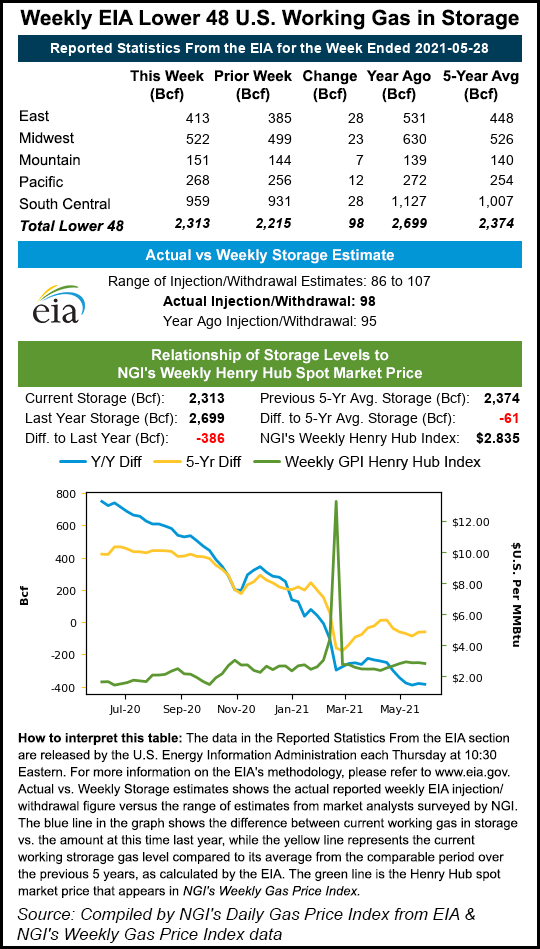 Natural gas futures also ended the week comfortably above $3.000 as upcoming heat combined with some renewed pipeline concerns to lift prices. The July contract capped the week at $3.097.

Rockies prices also strengthened during the short holiday week, with Cheyenne Hub moving up 14.0 cents to $2.775.

Henry Hub prices posted a similar increase of 16.0 cents week/week to average $2.995 as strong export demand helped keep prices afloat despite a lack of significant heat along the Gulf Coast.

Chicago Citygate averaged a nickel back of $3.000 after jumping 20.0 cents on the week, but on the East Coast, the mild weather sent prices crashing.

After surging last week but failing to maintain the $3.000 mark, Nymex futures managed to get the job done in the first week of June. The July contract closed the week not far removed from where it started the week but still a significant level that bulls had been eyeing for weeks.

Maintaining momentum at the front of the Nymex curve has been no small feat. Weather models this week have toyed with traders’ minds in projecting intense heat for the East Coast, only to shift the hot weather farther west. By Friday, though, both the American and European models showed warmer weather for the June 12-17 period.

NatGasWeather said high temperatures were forecast in the mid-80s to 90s over most of the United States besides the West Coast, where the recent heatwave will be replaced by showers and cooling.

Meanwhile, the most recent inventory data continued to reflect a loosening in supply/demand balances. The Energy Information Administration (EIA) said inventories for the week ending May 28 rose by 98 Bcf to 2,313 Bcf. This sent stocks to 386 Bcf below year-ago levels and 61 Bcf below the five-year average.

However, the 98 Bcf injection was seen as a further continuation of the loose supply/demand balances that have been reflected in the previous two EIA reports.

Instead, what may have solidified the leg higher for Nymex futures were reports that a force majeure called by Texas Eastern Pipeline (Tetco) earlier in the week could remain in place for longer.

The critical piece of natural gas infrastructure reinstated a 20% pressure reduction and reduced southwest flows out of Pennsylvania following an amended corrective action order from the Pipeline and Hazardous Material Safety Administration (PHMSA). Although PHMSA had “temporarily approved” the pipeline company’s ability to recommence operations at its “full maximum operating pressure” late last year, regulators had declined to renew the temporary approval. Tetco also may need to reapply for permits.

Bespoke Weather Services said this opens up “a whole new level of uncertainty” as far as price direction next week. The lack of clarity in the Tetco situation is made worse by the fact that the market is heading into a weekend, “with a couple of full days for weather, or fundamentals data, to change.”

The firm’s view is that the Tetco issue may find a way to “some resolution” sooner rather than later. In addition, it expects the easing of heat in the pattern after next week, with above-normal temperatures focused more in the Rockies/Plains, still promotes more downside risk to prices versus upside.

“As such, we still would not be shocked at testing the $3.00 level, but heading into a weekend with extraneous issues, it is difficult to be very confident,” Bespoke said. “Certainly, here near the $3.10 level, we are pricing in a good deal of bullish information, given the last three EIA numbers. But that, of course, does not mean it can’t still push higher yet. We feel it is best to see what all of the data looks like Sunday into Monday before taking a firmer stand.”

Spot gas prices continued to weaken Friday amid light weekend demand. Though temperatures were set to rise early in the week, the only gains mounted were on the East Coast.

Those gains for weekend through Monday delivery were large, though. In the Northeast, Algonquin Citygate jumped 96.5 cents to average $2.880 for the three-day gas period through Monday. Transco zone 6 NY was up 58.5 cents to $2.685.

On the pipeline front, Columbia Gas Transmission is scheduled to perform planned pigging on Line LEX, spanning West Virginia into Ohio. Wood Mackenzie analyst Anthony Ferrara said impactful restrictions were to be put in place for gas days Tuesday and Thursday, limiting up to 272 MMcf/d of receipts and 1,180 MMcf/d of westbound flow.

Prices on the West Coast also softened as the region was set to get a reprieve from the early summer heat, with the upper high pressure finally heading eastward.

The AL judge overseeing the California Public Utility Commission proceeding determining the future of the Southern California Gas facility responded to a petition that asked for Aliso’s inventory to be increased to 55 Bcf from 34 Bcf. The facility has been operating at a reduced capacity following an explosion in 2015.

Shippers on SoCalGas had requested the increase and asked for a shortened time to take comments, indicating it was necessary to start injecting in July to take advantage of the additional working inventory when it is increased, according to Wood Mackenzie analyst Joseph Bernardi.

“The judge responded by saying that the normal 30-day period would apply, allowing other parties to file responses to the shippers’ petition, followed by an additional period when shippers can respond to the replies,” he said. “The next update would come July 8 following both of these comment periods.”