After a stretch of widespread cold, warming weather in some parts of the United States but a lingering chill in others led to a mix of gains and losses for natural gas spot prices during the three-day Nov. 30-Dec. 2 trading period. NGI’s Weekly Spot Gas National Avg. ultimately climbed 39.5 cents to $7.180. 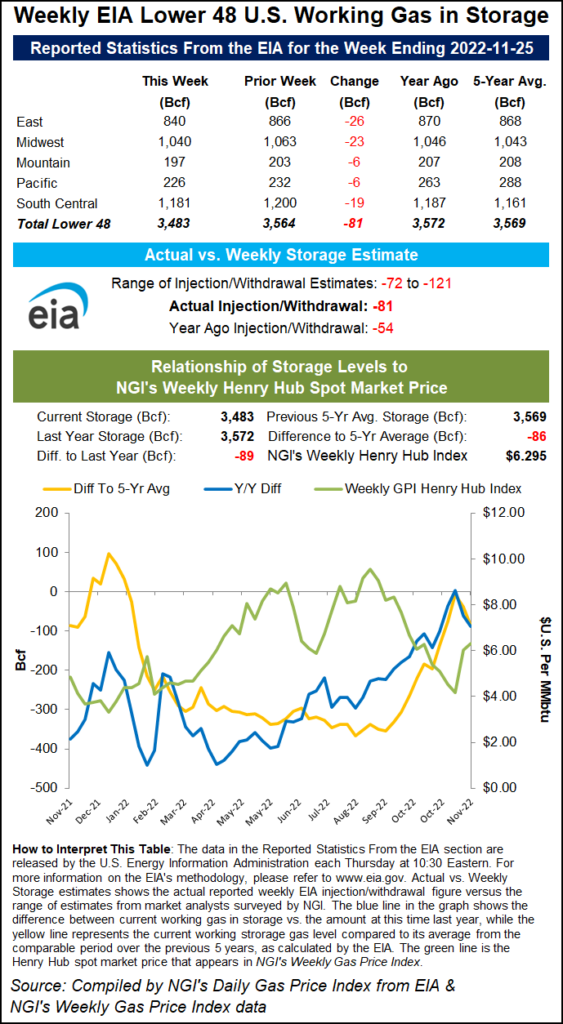 Natural gas futures, meanwhile, flopped in dramatic fashion this week as the milder December outlook, along with robust production and soft LNG feed gas demand, pressured prices. The Nymex December contract plunged 31.2 cents as it rolled off the board at $6.712. January failed to gather much momentum as it took over the prompt-month position and ultimately stood Friday off 91.5 cents from the start of the week at $6.281.

Indeed, aside from ongoing cold on the West Coast, most of the Lower 48 was set to see temperatures rise back to more seasonal levels in the coming days. In Texas, highs were forecast to climb back to near 80 in Houston over the weekend and then cross that threshold by Monday.

Though such lofty daytime highs could stoke a bit of air conditioning demand, spot gas prices cratered this week. Katy cash tumbled 74.5 cents on the week to average $4.900, and Agua Dulce slid 56.5 cents to $4.845.

Coming in with comparatively lighter decline was benchmark Henry Hub, which slipped only 35.0 cents on the week to $5.945.

Northeast locations, meanwhile, were down nearly $2.00 despite a winter storm in the forecast for the region late in the coming week. Algonquin Citygate cash dropped $1.380 on the week to average $7.370.

Despite the oncoming winter blast, recent weather model behavior has weakened the outlook for natural gas prices. After initially trending chillier for mid-December, the latest models have backed off the intensity of the cold. There was optimism the European data would continue to provide some bullish momentum, but it too has trended warmer.

NatGasWeather said this puts even more pressure on intimidating cold arriving for the second half of December into January. There’s still potential for that to happen, with frigid air over southern Canada potentially pushing into the United States. However, the latest run of the European model shed a hefty amount of heating demand for its long-range outlook.

Meanwhile, a couple of other potentially supportive market drivers also took a decidedly bearish turn late in the week.

A possible strike among railroad workers was averted after President Biden on Friday signed legislation that 12 rail unions ratified and four voted down. The legislation – which included a 25% pay raise and one extra paid day off – progressed through the House on Wednesday and the Senate on Thursday. A strike would have halted rail operations, disrupting coal shipments and putting increased upward pressure on natural gas demand and prices.

Also Friday, Freeport LNG pushed back the start of initial operations to “around year end,” a slight delay from the mid-December time frame the company was targeting based on its latest update. This keeps around 2 Bcf/d of liquefied natural gas feed gas demand out of the market.

Freeport on Thursday received several key approvals from regulatory agencies that allow it to complete certain critical repairs and commence reinstatement of certain systems, according to spokesperson Heather Browne. The company still has to meet other necessary regulatory requirements.

Though only a modest delay from the most recent targeted timeline, the delay – combined with a balmy near-term outlook – should ease supply concerns for this winter.

This week, the U.S. Energy Information Administration (EIA) said inventories fell by 81 Bcf during the week ending Nov. 25, in line with a wide range of expectations ahead of the report.

Broken down by region, the East led with a 26 Bcf decline in stocks and the Midwest with a 23 Bcf decrease, according to EIA. The South Central withdrew 19 Bcf, which included a 15 Bcf drop from nonsalt facilities and a 4 Bcf pull from salts.

Both the Mountain and Pacific regions saw stocks fall 6 Bcf, EIA said. For the Pacific, the withdrawal sent inventories 21.5% below five-year average levels.

Total working gas in storage as of Nov. 25 stood at 3,483 Bcf, which is 89 Bcf below the similar week last year and 86 Bcf below the five-year average, according to EIA.

Though the net withdrawal offered no surprises, a closer look reveals that it was the largest draw for the last full week of November since 2013, according to Mobius Risk Group. The firm also pointed out that the 81 Bcf pull expanded the year/year deficit by 27 Bcf.

“These two factors were shrugged off by the market, which sees the risk that next week’s data point is a 25 Bcf or smaller withdrawal,” Mobius natural gas analyst Zane Curry said.

Given the potential for colder-than-normal weather to return by the Dec. 10-11 weekend – and taking into account last year’s record-setting warmth in mid-December – the gas market could be in store for a string of plump withdrawals, according to Mobius. The firm said multiple triple-digit pulls are possible leading up to the Christmas holiday or later. This impact of such a stark drawdown “is akin to the impact of the string of triple-digit builds in the fall, but obviously with the opposite price effect,” Curry said.

Not even the West Coast could escape tumbling spot natural gas prices on Friday. Widespread losses spread coast to coast as temperatures were set to warm and demand to slide.

In the Rockies, Transwestern San Juan cash plunged $4.760 day/day to average $6.055 for gas deliveries through Monday. A handful of locations in California also dropped more than $4.00 on the day.

Losses of more than $1.00 were common throughout the rest of the country amid the return to more seasonable weather in some areas and downright balmy weather in others. Henry Hub cash dropped $1.400 to average $4.815 for the three-day gas period.