Heat may not be all that impressive for the last week after all, but that didn’t stop natural gas futures from staging one of the most significant single-day rallies in months. After surging as high as $2.267, the September Nymex gas futures contract settled Thursday at $2.232, up 8.9 cents on the day. October jumped 8.3 cents to $2.237. 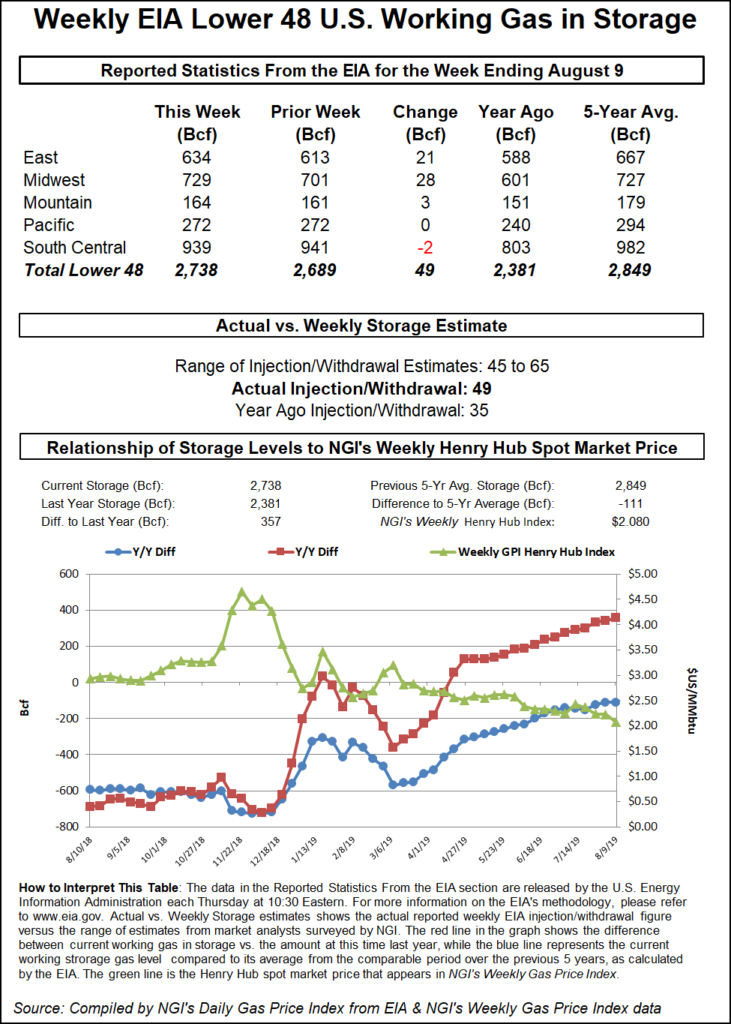 Spot gas prices were a mixed bag as the most intense heat across the United States was expected to remain in California over to Texas. With some moderate losses in the country’s midsection, the NGI Spot Gas National Avg. rose 2 cents to $2.02.

On the futures front, natural gas bulls have had little to sink their teeth into in recent weeks, as near-record production, generally lackluster demand and lower liquefied natural gas (LNG) intake have provided ample headwinds for prices. That changed on Thursday, however, when the Energy Information Administration (EIA) reported a storage injection that was about 10 Bcf lower than the market had expected.

Traders responded immediately once the print hit the screen, driving up the September Nymex contract a nickel higher from where it was trading just before the EIA report was released. Excluding weather-related demand, Thursday’s injection implies that the market was flat versus the same week last year and has averaged 1.0 Bcf/d looser over the past four weeks, according to Raymond James & Associates.

Although the reported 49 Bcf build was far off the mark, it still came in well above last year’s 35 Bcf injection and was on par with the five-year average build, according to EIA.

Nevertheless, analysts were perplexed at such a discrepancy. Bespoke Weather Services, which had called for a 61 Bcf injection, said that after factoring in the week/week decline in liquefied natural gas (LNG), the EIA figure is actually quite tight.

“The magnitude of the miss is difficult to rationalize,” Bespoke chief meteorologist Brian Lovern said.

Heat in Texas finally showed up in a big way over the last week, and wind output was lower as well, “which is always tough to model,” according to Lovern.

“September and October don’t get much fanfare, but it definitely matters if weather demand can deviate strongly one way or the other,” he said.

Despite a rather mild setup for the rest of this week across the northern United States, outlooks show hotter weather returning early next week, which could at least scale back the above-average storage injections experienced thus far this summer. Weather models overnight Wednesday added a few gas-weighted degree days to the forecast, with near-record levels seen around the middle of next week, according to Bespoke.

However, the midday (Global Forecast System) GFS data was a little cooler trending as it favored some cooler weather arriving slightly earlier. How much demand drops once that cooler weather moves in depends on the weather model, according to NatGasWeather. The GFS has daily cooling degree days near to slightly below normal during that time, while the European model is hotter overall, “although, even then still isn’t impressively hot Aug. 24-29, just better.”

Indeed, the market is weeks away from an unleashing of some 2 Bcf/d of associated gas when Kinder Morgan Inc.’s Gulf Coast Express pipeline begins full operations. Kinder on Thursday confirmed to NGI that the pipeline has begun flowing some commissioning gas to purge and pack the pipeline ahead of its full in-service in late September.

Meanwhile, the onslaught of new oil pipelines could bring even more associated gas into the market, providing additional headwinds as summer temperatures are starting to wane and demand begins to retreat. Plains All American’s Permian Basin-to-Gulf Coast Cactus II line this week delivered crude for the first time to the Buckeye Texas Partners terminal near Corpus Christi, TX.

Spot gas prices were mixed on Thursday as the unrelenting heat in California, Texas and the Southwest kept prices in the Permian strong.

Malin spot gas was up just a half-cent to $1.98, while most other points in California were lower day/day.

Prices were mixed in the Rockies, where Kingsgate dropped 6.5 cents to $1.80 and Cheyenne Hub edged up a penny to $1.81.

Gains were more pronounced on the East Coast, despite the comfortable temperatures in the region. In Appalachia, Tennessee Zn 4 313 Pool spot gas jumped about 10 cents to $1.925, while Iroquois Zone 2 in the Northeast rose a nickel to $2.15.

On the pipeline front, Tetco on Wednesday experienced another force majeure, this time on its Five Points compressor station in Pickaway County, OH. As a result, capacity at the Lebanon, Sarahsville and Five Points compressors will each be reduced by an average of 154 MMcf/d, to between 500 and 520 MMcf/d depending on the compressor.

Flows at these compressors will be impacted by an average of 130 MMcf/d compared to moth-to-date average flows, according to Genscape.

This means that yet another export line for regional gas is constrained, on top of the ongoing Danville force majeure following the explosion. “However, net production in the Northeast is still flat despite the explosion due to reroutes, and it’s possible that this gas can find other paths out,” Genscape said.

There is no estimate for a return to service, but Tetco has recently resolved unplanned outages quickly, often within a day.

Most other spot gas price increases across the country were capped at around a nickel.

Another project designed to ease takeaway constraints in the Northeast continues to face setbacks. Just days after a coalition of environmental groups filed a lawsuit challenging federal approvals for the Mountain Valley Pipeline (MVP), the project’s backers on Thursday said they would suspend construction in the habitats of endangered species, further affecting a project that has faced repeated delays.

The groups asked the U.S. Court of Appeals for the Fourth Circuit to review the project’s biological opinion and incidental take statement. After discussions with federal regulators, MVP said it has decided to voluntarily suspend construction that could impact habitats at points along the 300-mile route. While the project is more than 80% complete, it wasn’t immediately clear exactly how much construction would be impacted by Thursday’s announcement.