After gaining 25 cents in the past three sessions, natural gas futures took a breather Thursday. The November Nymex gas futures contract settled at $3.007, down 1.6 cents day/day. December, however, fell a sharper 7.6 cents to $3.272, and similar declines were seen through the remaining winter contracts. 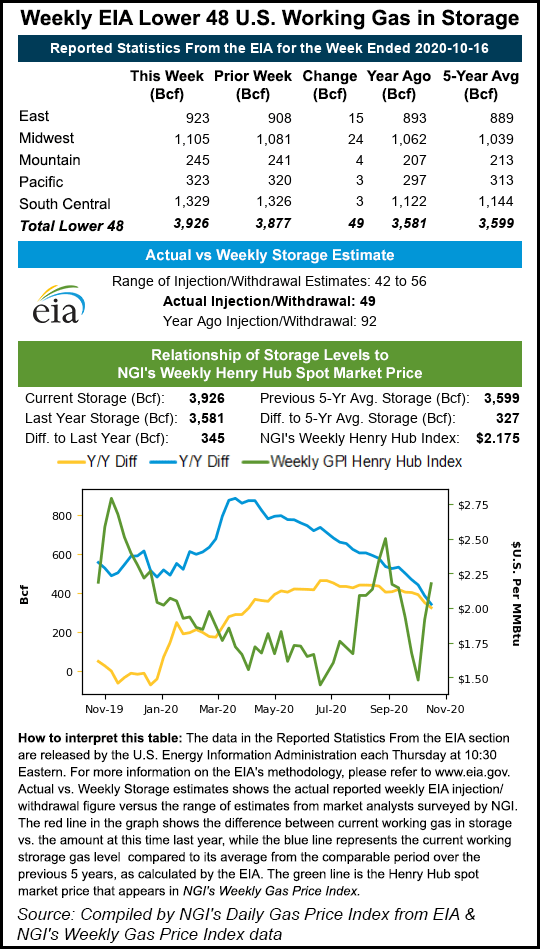 Nothing’s really changed in the fundamental backdrop, and that could be why futures prices remained intact on Thursday. Liquefied natural gas (LNG) demand bumped up a bit, but the gains were small compared to earlier in the week when traffic was allowed to resume near the Sabine Pass and Cameron LNG terminals. Lower 48 production held steady, and confidence in long-range weather forecasts may be waning given the recent back and forth within the model runs.

The latest Global Forecast System model run flipped again, this time trending colder for the 15-day outlook as it lingered cool air across the Northeast the first several days of November, according to NatGasWeather. Overall, a bearish pattern was to remain intact for the current week, but a more supportive setup could begin this weekend through next week thanks to cold shots into the northern and central United States. However, models pointed to warmer conditions again by Nov. 2, and there continued to be a large discrepancy between the American and European datasets.

“We expect volatile trade to get even crazier the next several trading sessions as November contracts expire Tuesday and Wednesday,” NatGasWeather said.

With storage fears largely in the rearview mirror, as evident in Thursday’s government storage report, weather and LNG demand were expected to be at the forefront of trading in the coming days, especially if LNG feed gas deliveries move above 9 Bcf, according to NatGasWeather. “But if the first week of November holds a milder or bearish pattern, markets would have to weigh the tighter balance versus wanting the early-November pattern to be a little colder.”

Mizuho Securities USA LLC’s Robert Yawger, director of Energy Futures, said he had three issues with natural gas that left him skeptical about the sustainability of the $3 rally. The first is that most of the combined net long in seven Nymex and IntercontinentalExchange contracts were driven by speculative traders, according to Commodities Futures Trading Commission data. The analyst also pointed to persistent storage surpluses. He also noted that the spread curve was not chasing the spot month higher.

Yawger said the March/April widow maker was trading at plus 28.5 cents, which is 23 cents lower on the day despite the fact that spot traded to a two-year high.

That more often than not does not end well, according to Yawger. “Natural gas is arguably bubble material. Watch out if that bubble pops.”

However, other analysts said with export demand nearing pre-Covid-19 levels, supply/demand balances were becoming increasingly tight. Furthermore, the massive storage overhang that carried through the summer appeared to be quickly eroding.

On Thursday, the Energy Information Administration (EIA) said inventories as of Oct. 16 rose by 49 Bcf to 3,926 Bcf, which is 345 Bcf higher than last year and 327 Bcf above the five-year average. That means that in three weeks’ time, the market has trimmed the surplus to last year by more than 100 Bcf and the surplus to the five-year average by 78 Bcf.

“The supply/demand balance is getting increasingly bullish with smaller-than-normal builds lining up numerous weeks deep,” said NatGasWeather. “In fact, the EIA report two weeks out is now close to printing a draw by our data. This will help to drop current surpluses of 327 Bcf towards 250 Bcf.”

However, Bespoke Weather Services expects to see some loosening going forward as higher prices impact power burns, “but the backdrop remains quite bullish if weather can deliver a colder pattern this winter. We do not currently favor a cold winter at this time, however.”

Gelber & Associates Inc. natural gas analyst Dan Myers said he expected gas-to-coal switching to make a comeback over the next few weeks. “The market could lose around 1.5-2 Bcf/d of power demand compared to last year at these prices.”

Broken down by region, the Midwest added 24 Bcf into inventories, and the East added 15 Bcf, according to EIA. Stocks in the Mountain region climbed 4 Bcf, while the Pacific rose 3 Bcf. The South Central region reported a net 3 Bcf injection, including a 9 Bcf build in nonsalt facilities and a 6 Bcf withdrawal in salts that lowered stocks to 360 Bcf.

The hefty draw in salts caught market observers off guard, but may have quelled containment fears since maximum salt storage capacity is estimated to be 400 Bcf.

Looking ahead to the core of winter, Myers said stronger overseas demand and higher prices were expected to continue through the season, keeping U.S. exports near capacity. The domestic market “is still dependent on a forceful start to winter to sustain these high prices,” though, and that seems to be in question after early November.

Meanwhile, Myers sees the storage surplus carrying the market through an “average” winter. However, the analyst warned that the “complete lack of drilling and heavy undersupply we’re heading for next year is intimidating.”

Permian Basin cash prices can’t seem to catch a break. After dips into negative territory in recent days, the  big move higher on Wednesday could not be sustained.

At the heart of the decline was a force majeure issued Wednesday by El Paso Natural Gas (EPNG) that’s impacting key takeaway throughput meters in the Permian. The outage essentially bottlenecks up to 300 MMcf/d of Permian production for an indeterminate amount of time, according to Genscape Inc.

Equipment failure at the Plains Compressor Station that feeds EPNG’s North Mainline had restricted nominations by around 303 MMcf/d when compared to the prior 30-day average of 484 MMcf/d, Genscape said. This backed up production resulted in slightly increased flows at Southern outlets onto the South Mainline, but that system was already constrained and unable to fully absorb displaced volumes.

Elsewhere across the Lower 48, gains were prevalent. Henry Hub spot gas inched up 2.0 cents to 2.880, while the Midcontinent’s Northern Natural Ventura hub jumped 29.0 cents to $3.000.

Prices throughout the Southeast were mostly higher, with day/day increases ranging from 7.0 cents to 16.5 cents. One exception was at Dominion Energy Cove Point, where next-day gas fell 23.0 cents to 98.0 cents. Appalachia prices also moved lower, led by Tennessee Zn 4 313 Pool, which tumbled 16.0 cents to $1.105. Algonquin Citygate dropped 25.0 cents to $1.490, and even steeper losses were seen elsewhere in New England.