Lower 48 shut-ins are coming back online, bringing a renewed call for more horsepower as operators complete wells, with “stable to modestly improving” activity to the end of the year, the chief of Natural Gas Services Group Inc. (NGSG) said Tuesday. 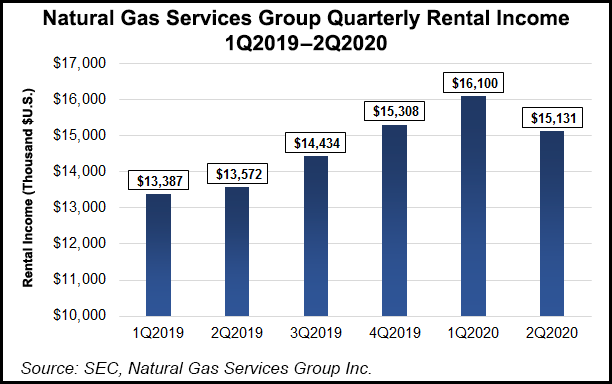 Customers are slowly coming around, with a big order underway for the Permian Basin, Taylor said. While conditions to the end of 2020 look challenging, “we do not believe it can be worse than what we experienced in the first half of the year…There are some modestly encouraging signs on the horizon…With a stable to modestly improving operating environment, we believe there will be opportunities in the balance of the year and even more as we turn the page into 2021.”

Commodity prices “have improved from the trough,” but “they remain significantly below levels that will spur significant oilfield activity,” he said. “While business has improved, the pace has been slow and inconsistent, a trend we expect to continue, but gradually improve, to the balance of the year.”

There was a “modest increase” in unit and horsepower utilization in June, and levels remained stable in July as oil prices stabilized and more shut-in production was restored. A recent rental order in the Permian that is expected to cost more than $6 million has allowed NGSG to set capital expenditures for the last half of 2020 at $8-10 million.

The Permian continues to be the “center of the world” for work, Taylor told analysts. About 60% of the new compression is classified as “large horsepower,” he said.

“Our customers’ capital budgets continue to be constrained, and we expect sales revenues to remain soft in the coming months as companies favor short-term rental commitments over more permanent capital spending,” Taylor said.

“This reflects the addition of 58 high hp compressors, representing 68,500 hp to the fleet over the past 12 months,” Taylor said. About 40% is classified as large equipment.

“Compared to small and medium horsepower, larger machines tend to fare better in a downturn. This portion of our rental fleet provides a measure of stability when encountering periods of depressed activity. And I think the advantage this quarter is apparent improvement.”

“Any number greater than 1.0 indicates unit growth, so we’ve seen quite a variation in activity in only three months, from equipment being shut-in and returned…to a total turn of events a couple of months later. As of the end of June, we have had a bit more than half of the rental units that were shut-in return to service, and we anticipate the balance to come back online over the course of this year.”

The “ferocity and speed” of the downturn “was atypical of what we normally experience when moving into times of depressed activity,” Taylor said. “Usually, loan discount is the name of the game. Crude drops over time, various discounts are negotiated over many months, and there’s generally time to adjust to a declining market.

“There was no time to adjust with this.” Instead of the usual negotiated rate reductions, “some revenue just vaporized overnight.”

The industry trough may be in the rear-view mirror, but “we think it will take the balance of the year to get back close to what we lost. The speed at which the business directed down and then back up demonstrates the resilience of our field organization and our ability to quickly adjust to unanticipated conditions.”