Natural gas is set to play an increasingly important role in Colombia, according to two prominent energy sector participants who spoke via web at the Institute of the Americas’ La Jolla Conference on Wednesday. 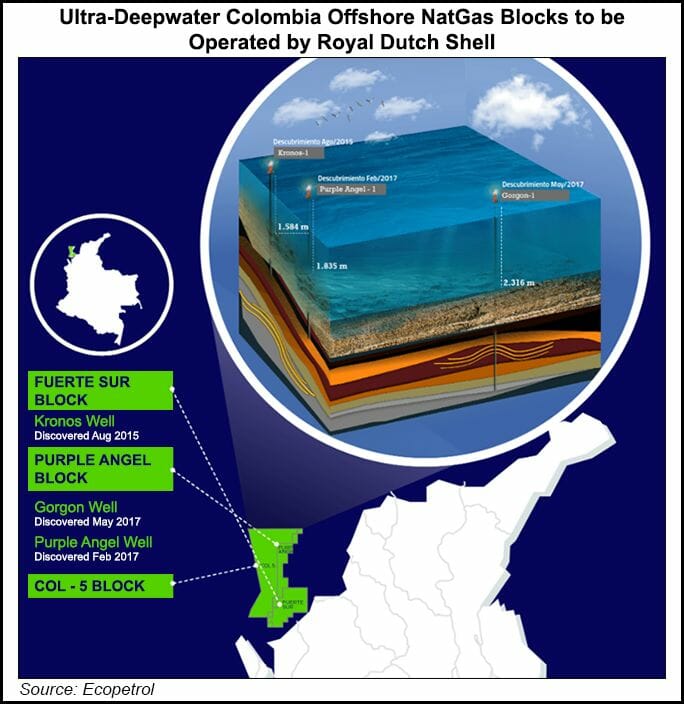 “Natural gas has a key role to play in Colombia’s energy security and in its energy transition,” said Ana María Duque, the president of Royal Dutch Shell plc’s Colombia division. “We have been working very closely with the government in a collaborative environment. We need to be sure we don’t lose that long-term vision and that we keep working together.”

Duque said that in order for Colombia to take advantage of its natural gas opportunity, it needs to “massify the use of natural gas in the country,” where 20-25% of its residents still don’t have access and “still have doubts about its use.”

Colombia produced 1.1 Bcf/d of gas in the first quarter, up 5% year/year.

Work still needs to be done to improve competitiveness and increase pipeline connections between markets, as well as in the commercialization of gas, Duque said. “We need a framework that is competitive compared to other markets in the world.”

Colombia’s key oil and gas industry has been hit by low oil prices and the demand consequences of Covid-19.

Some estimates see foreign direct investment in Colombia falling by as much as 20% in 2020 as a result.

Meanwhile, the country’s strict lockdown has been extended yet again and now runs through the end of May.

“There has been some reduction in production, not only due to prices but also logistical problems,” National Hydrocarbons Agency (ANH) president Armando Zamora said during the event. “But this is one sector that has not stopped. The government has made sure that the rights to transit for key workers continue. It has been so far a success. We’ve had some fears about workers, and we’ve had isolated instances of Covid, but that has been contained successfully.”

Zamora said that the ANH is working on easing rules on operators, including introducing “some flexibility” and deferrals of financial obligations.

“We believe that the energy sector is going to be in a good position in the recovery. We believe that prices will recover, and we will be among the first in line to receive the next wave of investment.”

The head of the hydrocarbons regulator also argued that working from home has actually made the regulatory environment in Colombia more efficient, especially as it pertains to sanctioning hydraulic fracturing (fracking) pilot projects in the country.

“Regarding the fracking opportunity, I would say that curiously enough, during the lockdown, actually the process of regulation has sped up. Everything has continued with a faster pace so the timetable continues. And there is interest there from the companies.”

ExxonMobil and ConocoPhillips, along with Ecopetrol, are among companies that have expressed formal interest in these pilot projects, which the ANH expects to start in the first half of next year.

“There is a very comprehensive plan to make the pilots a scientific endeavor,” Zamora said. “The pilots are to show what hydraulic fracturing is about and what the impacts are.”

He also argued that bidding rounds for the end of the year and next year are on track, and “all of our promotion will be online, digital…we are entering really fast into the new world, and that’s where we want to position ourselves.”

Proven natural gas reserves in Colombia were 3.1 Tcf at the end of2019, equivalent to eight years of production, but Zamora sees contingent gas reserves as “eight times higher,” such that despite plans for a Pacific Coast liquefied natural gas terminal, which would be the country’s second, “there is a lot of potential for gas not only for the internal market but also for export.”

“Gas is the source of energy for the transition,” he said. “We want our fair share of the market.”

Both Zamora and Duque agreed that the coronavirus has irrevocably changed how the energy sector, and the world, works.

“These lockdowns are making us aware of things we take for granted, like energy,” Duque said. “The entire world needs to learn how to live in this reality, we need to see how many things we can continue to do remotely, and I think this is very positive.”

Zamora said that, “Our remote working situation will continue indefinitely even post-Covid. In terms of efficiency, inside we have made tremendous progress in assessing the situation of the agency, of what must be done. The new world is here to stay.”