The natural gas industry risks becoming marginalized unless it steps up and convinces the public how necessary it is, top executives said Tuesday. 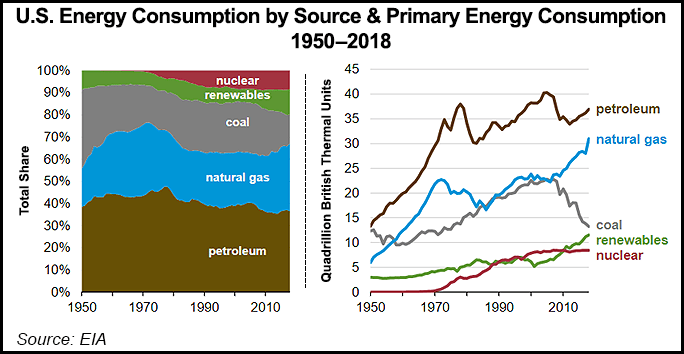 “The industry really is at a critical juncture,” Woodside CEO Peter Coleman said. “We run the risk of being demonized like that other fossil fuel out there called coal.”

Countries across the globe are enacting more stringent regulations to reduce carbon emissions and the gas industry has to do a better job of policing itself, he said.

“As we sit around our boardroom, we think about cataclysmic events,” driven by weather events in developed countries, such as the heat wave this summer in Europe or U.S. hurricanes.

“Cataclysmic weather events that are climate linked will start to change regulators’ minds once and for all,” Coleman told the audience.

“I think everybody realizes what we’re trying to do here to get to a lower carbon world, which is an expensive mix.” And “regulators can spend lots of money when it comes to getting votes.”

To that end, he advised operators to “be careful to meet promises,” as “there’s a lot of rhetoric” by companies that are eyeing zero-net carbon status by 2050. The messages are “all aspirational,” but people are watching.

“So, I think we’re going to get into a situation soon where we’re called upon to account for promises made, for the aspirations we are setting,” the Woodside chief said. Some operators won’t “survive the change, but those that do will thrive…Doing nothing is not an option in today’s world.”

BP America President Susan Dio reiterated that global “demand for energy is going to continue to increase, yet we need to increase at about half of the rate of carbon emissions totals. It is a challenge for us.

“In terms of success, we need reliable, affordable energy across the globe, and natural gas plays a key role in that.”

Gas is a remarkable partner with renewable energy as well, as it provides a reliable back-up power source. However, the industry’s “Achilles’ heel,” she said, are methane emissions.

“For us to make this industry viable and attractive for the future, we have got to reduce emissions,” Dio said.

ConocoPhillips executives do not believe oil and gas “are going to go away anytime soon,” CFO Don Wallette Jr. said.

“The world is thirsty for energy and it’s only going to get thirstier.” By 2050, the world’s population is expected to increase to 10 billion from 7 billion people today, he noted.

“Population growth is nothing new…What is new, for the first time ever, is that over half of the population is considered to be middle income or above. So people want their modern conveniences, and they can afford them.”

A lot of the new demand is going to be fueled by natural gas.

“There are extensive hydrocarbons being developed at today’s prices or lower, and in large part that is thanks to the shale revolution,” Wallette said. Those resources provide “energy security… Supply access and security are relevant and timely today, especially given the events in Saudi Arabia last weekend.”

However, “we have entered a window where choices on how we grow will increasingly differentiate companies,” he said. “And customers will observe this differentiation with great interest. Watch this space.”