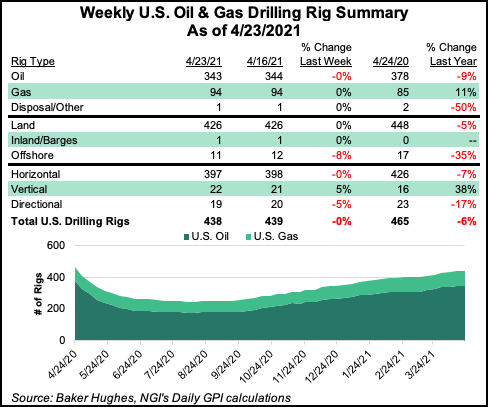 Oil rigs fell one unit to 343 in the United States for the week, lowering the combined U.S. count to 438. That’s down from 465 active units in the year-ago period, according to the BKR numbers, which are based partly on data provided by Enverus.

The Gulf of Mexico posted a net decline of one rig week/week, dropping its total to 11, versus 17 a year ago. Total U.S. land rigs remained unchanged at 426. One vertical unit was added in the United States, while one horizontal rig and one directional rig exited the patch.

The Canadian rig count also decreased by one for the week to fall to 55, with a drop in natural gas-directed units accounting for the change. Canada’s 55 rigs as of Friday compares with 26 rigs active at this time last year, the BKR data show.

As the small overall net change in the domestic rig count might imply, there were no dramatic changes among major U.S. plays during the week. The Permian Basin saw its total slide one unit to 226, down from 246 a year ago.

Broken down by state, New Mexico posted a net increase of one rig week/week, while the count in Texas fell three units to 211, according to the BKR numbers.

Schlumberger Ltd., the world’s No. 1 oilfield services company, unveiled its latest quarterly results on Friday, with the company reporting an acceleration in North American land activity.

“The first quarter of 2021 was a step forward,” CEO Olivier Le Peuch told analysts during a conference call. “The quarter unfolded, as we anticipated, with acceleration in North America activity and momentum continuing to build in the international market, aside from the usual seasonal effect.

“…A new growth cycle has finally commenced, and we are prepared to deliver growth and returns that outperform the market.”