Houston super independent APA Corp., whose U.S. operations are focused in the Permian Basin, is taking a cue from higher natural gas and liquids prices to restart development in its almighty Alpine High portfolio. 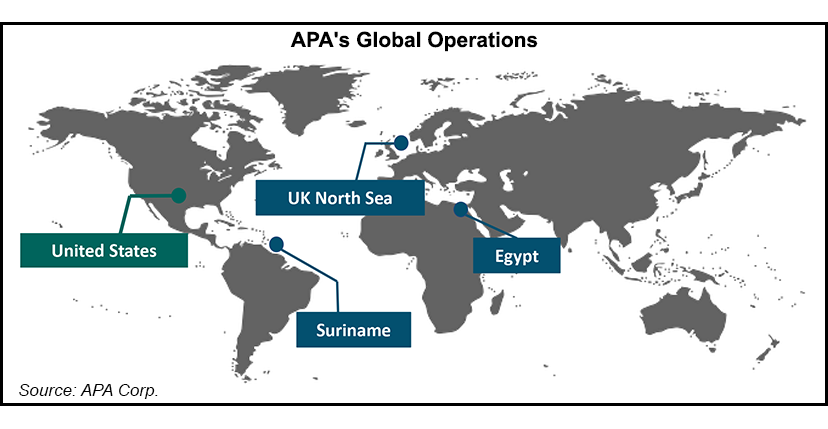 The executive team, led by CEO John J. Christmann IV, shared second quarter results in a recent conference call. The team also laid out the highs during the period – as in Alpine – and explained the lows – led by high fuel costs and well delays.

Still, the natural gas-rich Alpine High formation in West Texas, which formerly was APA’s No. 1 global prospect, may be on the cusp of a rebirth.

In early 2020, APA withdrew from actively working the monster play. Christmann at the time cited a lack of pipeline infrastructure, cryogenic processing to test natural gas liquids (NGL) and slumping prices. The issues never allowed the Permian prospect in the Delaware sub-basin to be as profitable as APA had expected when it was discovered in 2016.

The company “had great hope for what it could mean,” Christmann had said in 2020. “In the end, a number of factors were problematic at Alpine High.”

With natural gas demand jetting upward worldwide, though, Alpine High’s prospects appear to be looking up too. In late July, APA completed a $505 million acquisition in the active development areas of the Delaware with an undisclosed seller.

“This is an attractively valued tuck-in acquisition,” Christmann said of the purchase. It includes a “combination of producing wells, wells in the process of drilling and completion and an inventory of undrilled locations. The acquisition also brings immediate access to a high quality drilling rig and experienced crew for ongoing development.”

“There are currently two rigs running on the new acreage,” the CEO said. “One will be released in the fourth quarter, and we will retain the other as our fourth U.S. development rig. These assets compete well within our portfolio and integrate nicely into our Permian operations.”

Cheniere, said CFO Stephen Riney, has the option to start the contract early, with 90 days notice. “They can do that at any time at this point.” However, “at a minimum,” the contract is set to begin in July 2023.

U.S. LNG, Japan Korea Marker (JKM) and Title Transfer Facility (TTF) pricing “has been amazingly volatile in the last year or so, for that matter here recently, so has Houston Ship Channel,” the CFO noted.

“Basically, the contract is structured…where we capture the margin of a mixture of JKM and TTF and LNG pricing over Houston Ship Channel. Effectively, people can think of it as we’re going to buy at Houston Ship Channel. We’re going to sell at a mix of JKM and TTF, and we’re going to pay some costs associated with tolling through the Cheniere plant,” Riney said. “Then we’ll pay the costs of transport and fuel loss and things like that. There’s some costs in between that.”

Those free cash flow (FCF) numbers are not in APA’s three-year business forecast that it issued in February, Riney noted. “We just assumed all of that there was zero margin over Houston Ship Channel for that contract.”

The “tuck-in” acquisition in the gassy part of the Delaware “has good inventory with long laterals and nicely fits in,” Christmann said. “This is a nice ability to take and pick up some properties in an area that we know well and where we’ve been running programs.”

Executive Vice President Dave Pursell, who oversees Development, said some wells have come online recently. “We have a handful that are coming online later this month, which will drive production through the end of this year. We also have two rigs finishing out a pad that will add a substantial number” of drilled but uncompleted wells, or DUCs. The pad “will likely complete in the first quarter of 2023, so there’s a lot there.

“I think when you think about the opportunity set here, we’ve got a number of intervals that this zone has that are low risk” in the Delaware, Pursell said. “We know the rock around existing infrastructure,” with “probably several years of drilling just on those. And there’s some upside potential. There’s a number of zones we’re testing in our existing footprint and will continue to test those and will likely test those zones here on our new acreage.”

During 2Q2022, the Lower 48 operations averaged two rigs in the Permian Midland sub-basin. Six wells were turned to sales, with 10 set to ramp up by the end of September.

One rig on average also was working in the Austin Chalk acreage in Central Texas, west of College Station. The formation runs from South Texas into Louisiana.

Three wells were turned to sales during the quarter, but APA said it is “pausing the delineation program to integrate results.” The active rig is to be released in September, and three wells would be brought online before the end of the year.

This year’s production guidance has been sliced by about 2% overall. The reduction, Christmann noted, comes on the heels of high oil prices on production sharing contract volumes in Egypt, timing delays on Permian and Egypt well completions, mixed results from the Austin Chalk delineation, “minor” divestitures, and the five months of production from the new Delaware assets.

Inflation: Word Of The Quarter

Riney told analysts that “cost inflation has become a popular topic in quarterly earnings calls, and for good reason. Oil and gas firms are subject to the same inflationary pressures on labor, materials, fuel and service and every other industry.

“We embedded a substantial amount of cost pressure into the budget we laid out in February,” the CFO said. “For the most part, we were close to that plan for the first two quarters. For the second half, we anticipate a bit more inflationary pressure” in lease operating expenses than in original guidance, “especially in fuel costs.”

APA uses cash-settled, stock-based incentive compensation plans that require a quarterly mark-to-market based on movements in the share price, Riney explained. “This introduces some volatility” in the general/administrative (G&A) expenses.

“With the higher commodity prices, you will note that both sales and costs related to purchased oil and gas have increased substantially…Where possible, we sell all of our product in-basin, and our marketing organization fulfills obligations on various commercial agreements, such as long-haul transport contracts using purchased product.

“If recent strip prices hold, we expect to generate approximately $3 billion of free cash flow in 2022, and by year end, at least $1.8 billion of this capital will be returned to shareholders through dividends and share buybacks,” Christmann said. “Through July, we have returned just under 50% of this amount.

“Looking to the back half of the year, our production will increase as the drilling program in Egypt reaches 15 rigs and efficiency levels improve, the rate of well completions increases in the Permian Basin, summer maintenance turnarounds conclude and the Garten-3 well commences production in the North Sea.”