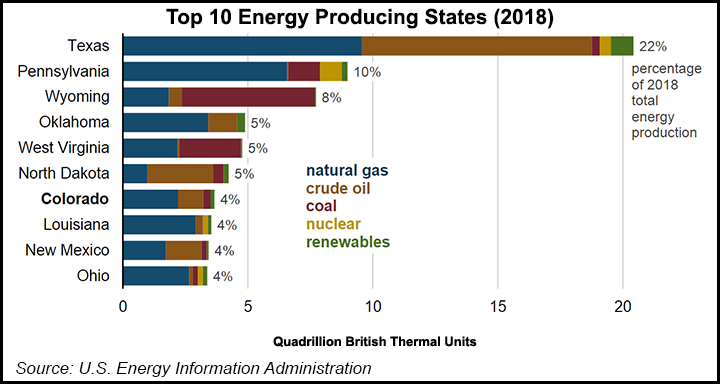 Weld County, north of Denver and the epicenter of the state’s production, accounted for nearly half of natural gas output, followed by Garfield, La Plata, Mesa and Rio Blanco counties in the western half of the state, according to EIA.

Mainly because of the advent of unconventional drilling, Colorado’s oil production grew nearly six-fold between 2009 and 2019, researchers said. The state accounted for nearly 4% of domestic oil output last year.

EIA also estimated that Colorado is home to about 4% of the country’s economically recoverable oil reserves.

Coal production, meanwhile, has plunged over the same span, to 12.5 million short tons in 2019 from 36 in 2007, as coal-fired power generation has been displaced by natural gas and renewables.

The share of renewables in the state generation mix, meanwhile, grew to 25% from 10% over the same period, with wind accounting for 20% of electricity produced in 2019.

The increase in oil and gas output has been accompanied by some of the country’s most stringent environmental regulations for the sector, punctuated by the signing of Senate Bill (SB) 181 into law by Gov. Jared Polis in 2019.

Weld County is leading resistance in court to a set of air quality rules for oil and gas operators enacted in December by the state’s Air Quality Control Commission under the framework of SB-181.

In June, COGCC also adopted wellbore integrity standards that Polis said were “the most protective” in the country.

In related news, the Colorado Oil and Gas Conservation Commission is considering raising its mill levy for operators to 1.1 mills to 1.7 mills, the maximum allowed by law, in order to make up for projected revenue shortfalls from lower commodity prices and reduced oil and gas activity in the wake of Covid-19.

Mill levies are property taxes whose rates are expressed in mills, which are equal to $1/$1,000 of assessed value.