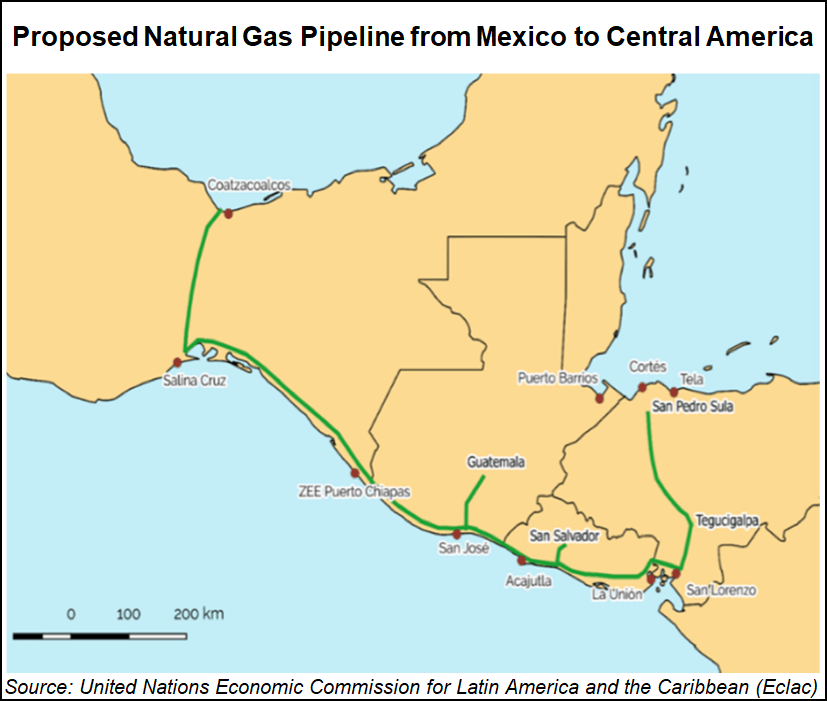 Central America, with its population of some 44 million, has four natural gas projects, each valued at some $1 billion, to build regasification units in order to fuel combined-cycle plants.

Mexico meanwhile plans to extend a pipeline from the port of Coatzacoalcos in the state of  Veracruz across the Isthmus of Tehuantepec, the narrowest strip of land in the country between the Atlantic and Pacific. From there the gas can be liquefied for export to Asia. Along the isthmus, López Obrador has said that the gas will be used to fuel factories in the region, whose inhabitants are among the poorest in Mexico.

Central America depends on expensive imports of bunker fuel and gasoline to power its economies. Now, however, it is fast developing the infrastructure required to import and use much cleaner and less expensive LNG.

One project is already in operation, two more are getting close to completion, and a fourth was announced recently by President Laurentino Cortizo of Panama.

This latest project is owned by Consorcio Group Energy Gas Panama, formed  51% by InterEnergy, which provides clean energy to the Dominican Republic, Panama, Jamaica, and Chile; AES Panamá, with a 24% stake in the project; and the government of Panama, with 25%. Operational launch is slated for late 2023 or early 2024.

The $1 billion investment is located at the Gatún plant on Telfers Island, Colón, near the Caribbean entrance to the Panama Canal.

AES Corp. and a local subsidiary already own the region’s first operational LNG import facility which came online in October 2019 and included a 381 MW combined-cycle plant. Deliveries of gas are being sent from the facility to points throughout Central America and even part of northern Colombia. Total investment was $1.15 billion, including a 49% participation from private investment firm Inversiones Bahía.

In El Salvador, Energía del Pacífico (EDP) is located at the port of Acajutla.The cost of roughly $1 billion was by far the biggest investment in a mega-project in the country. The current owner, Chicago-based Invenergy, is working to finish the project with a floating storage and regasification unit, along with a 378 MW combined-cycle plant. EDP aims to complete the natural gas unit by the end of this year.

In Nicaragua, New Fortress Energy Inc. is developing a 2.4 million gallon/day import terminal and 300 MW gas-fired plant. Wes Enders, the iconoclastic chairman of US-based New Fortress Energy, was once described by the Wall Street Journal as noted for his “contrarian bets.”

There is also the longstanding plan to develop a natural gas pipeline that would transit from Mexico through Central American nations, helping to spur industrialization along its route.

Luis de la Calle, one of the heads of the Mexican delegation that led to the creation of the North American Free Trade Agreement (Nafta), has written in the Mexico City daily El Universal that Central American nations could form part of an expanded North American economy.

Energy, of course, would be required, while the creation of well-paid job opportunities would remove the desperation that many Central Americans feel when they think about migration.

Alejandro Alle, who launched the Central American LNG revolution in El Salvador as Executive Director of Energía del Pacífico, is an enthusiast of industrial development in the region. But he told NGI’s Mexico GPI that he remains skeptical about projects developed by politicians. “The best business projects are those that are designed and devised by business people themselves,” he said.

“An overnight railroad delivery of goods sounds all very well, but it needn’t necessarily be an improvement if it costs a lot less to deliver by sea. And a big pipeline to deliver the gas could be counterproductive when the projects now underway in Central America already have long-term projects for LNG delivery.”