A hefty storage deficit combined with near-record production had April natural gas bidweek traders taking stock of the market’s supply and demand balance on the cusp of injection season; the NGI National Bidweek Average shaved off 7 cents month/month to $2.36/MMBtu. 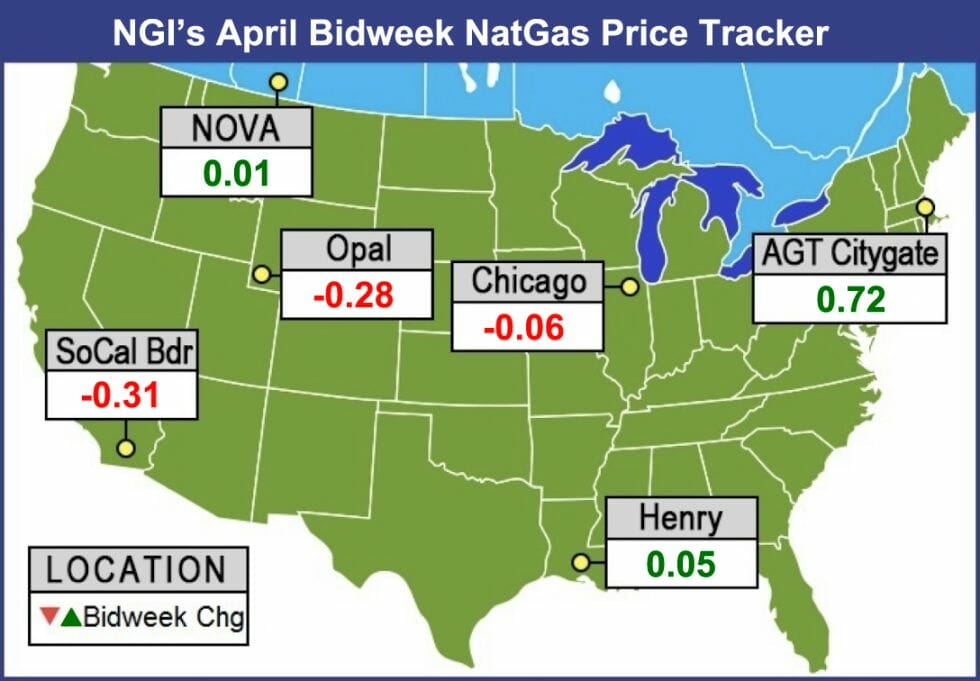 The month of March offered a handful of late-winter storms along the East Coast that helped make up for a mild February. Forecasts during bidweek trading showed colder temperatures lingering in the Midwest and East through the first week of April, enough to prolong the withdrawal season by another week or two, according to analysts.

The threat of lingering cold appeared to support the Northeast regional average during bidweek, mostly thanks to a 72 cent gain at the constrained Algonquin Citygate, which averaged $4.14. Tennessee Zone 6 200L similarly averaged $4.21.

Meanwhile, a 5-cent month/month increase at Henry Hub helped support modest gains at points throughout the Gulf Coast and Texas.

In its last day of trading, the April futures contract climbed 7.3 cents to expire at $2.691, about a nickel higher than the March contract expiry. Helped by the supportive weather outlook, April gained a combined 10 cents over its last two days on the board to finish on a high note.

The strong finish for April still left prices on the wrong side of $3.00, with surging production seemingly enough to overwhelm any bullish momentum gained from late-winter heating demand and a 300 Bcf-plus year-on-five-year storage deficit.

The Energy Information Administration (EIA) reported a 63 Bcf withdrawal from Lower 48 storage for the week ended March 23, tighter versus the 58 Bcf withdrawn in the year-ago period and a five-year average withdrawal of 46 Bcf. But the figure came in slightly bearish versus expectations.

“This is the fourth week where EIA data was on the looser side of expectations, as data shows the impact of increased production and limited nuclear outages” during the report week, Bespoke Weather Services said. “On a seasonal basis the print shows structural tightness also easing as production soars.”

“Weather-adjusted supply/demand balance takes another slide toward parity from the undersupply scenario we’ve been seeing all winter,” analysts with Tudor, Pickering, Holt & Co. (TPH) said. The 63 Bcf withdrawal comes in about “1 Bcf/d lighter than analyst expectations, implying a near-balanced market. Expect to see an inflection point in storage levels as injection season draws nigh.”

Early storage estimates for the week ending March 30 “indicate the draw will nearly halve week/week,” said TPH. “With production levels in March some of the highest on record and continued upside from impending takeaway capacity, we expect a step-change to oversupply in the coming months.”

Not including storage data from the last week of March, the winter 2017/18 season will finish “well behind inventories from the prior two winter seasons,” according to OPIS by IHS Markit analyst Sadie Fulton.

RBN Energy LLC analyst Sheetal Nasta said in a recent note that even with an expanding storage deficit the prompt month contract has “struggled to hold onto the $3/MMBtu level it started the season with in mid-November, and, in fact, has retreated back to an average near $2.70 in the past couple months — about 25 cents under where it traded a year ago.”

A year-on-year comparison showed the natural gas market about 1.7 Bcf/d tighter, with growth in liquefied natural gas exports and higher residential/commercial (res/com) demand helping to drive a 9.1 Bcf/d year/year increase in demand for winter 2017/18, according to Nasta. This comes as growth from the Marcellus and Utica shales has seen production “average a whopping 6.8 Bcf/d higher than the previous winter” to drive a 7.4 Bcf/d year/year increase in cumulative supply.

“There is a big caveat to that winter-on-winter comparison, which is that the weather in winter 2016/17 was extremely mild,” Nasta said.

While April cold could extend the withdrawal season a while longer, “with the coldest months of the winter behind us, overall demand is expected to trend lower from here,” Nasta said. “Additionally, rig counts, producers’ drilling plans and pipeline expansion plans — including the Rover Pipeline completion — all point to still more production growth from the current record levels. Thus, it’s looking like the days of an expanding storage deficit (compared to last year and the five-year average) are likely numbered.

“The bottom line is that while supply-demand balance has appeared more bullish than last year, that’s been more a function of the extremely mild winter demand last year and less about this winter being particularly strong. Rather, the outlier this winter is just the sheer volume of new gas production coming online, and that’s likely to become all the more apparent as the shoulder season wears on and heating demand fades.”

As negative basis differentials have taken hold for Permian natural gas prices, crude oil takeaway capacity is also a concern, according to a recent note by East Daley Capital (EDC).

The spread between crude prices in the Permian’s Midland sub-basin “and East Houston grew to a high March 30, reaching $6.15/bbl,” EDC analysts said. “The growing spread is indicative of the quickly filling takeaway capacity in the Permian, which EDC estimates could completely fill by mid-2018.”

EDC said its estimate is based on looking at a daily residue gas sample to gauge production growth. That sample “confirms the growth trend, rising from an average of 2.6 Bcf/d in January 2018 to 3 Bcf/d in March. The next crude pipeline project expected out of the Permian is the” Energy Transfer Partners LP-backed “Permian Express 3 pipeline, which will provide 200,000 b/d of relief in late 2018. With the rapid growth in production, the spread between Midland and Houston could grow significantly for multiple quarters.”