Strong growth in domestic natural gas production is expected to draw down prices through next year, with Henry Hub spot averaging $2.79/MMBtu in 2019 and $2.78 in 2020, according to the Energy Information Administration (EIA). 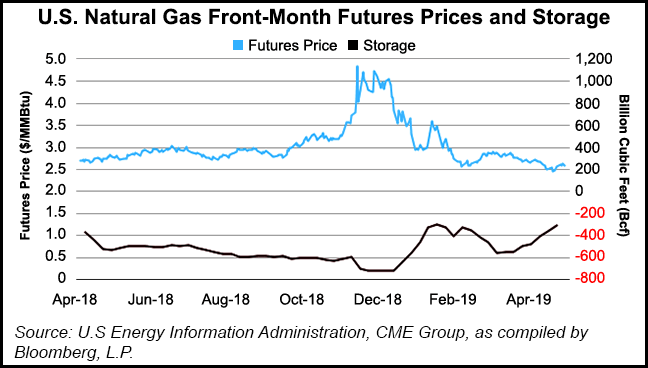 In its Short-Term Energy Outlook (STEO) issued Tuesday, EIA said the latest estimate for 2019 is 36 cents below the average realized price for 2018. This year’s estimate also is 3 cents off the STEO issued in April, but the estimate for 2020 was up 1 cent.

EIA said the Henry Hub spot price averaged $2.64 in April, down 31 cents from March on warmer-than-normal temperatures across the United States, which reduced demand for heating and contributed to above-average inventory injections in April. EIA reported a 123 Bcf injection into U.S. gas stocks for the week ended April 26.

“The larger-than-normal April injections brought U.S. storage levels closer to the five-year (2014â€“18) average,” EIA said. Working gas inventories in the United States at the end of April were 314 Bcf, 17% lower than the five-year average, compared to 486 Bcf (29%) lower at the end of March.

“If this estimate is confirmed in monthly data, April 2019 would be the first month since November 2016 to show a year-on-year increase in natural gas working inventories,” EIA said. “Above-average inventory builds contributed to downward natural gas price movements throughout April.”

EIA expects higher gas production during the injection season will continue to reduce the storage deficit relative to the five-year average and contribute to Henry Hub remaining below $2.70 on average in 2Q2019 and 3Q2019. EIA also estimates dry gas production will average 90.3 Bcf/d in 2019, up 6.9 Bcf/d from 2018, and will continue to grow into 2020 to an average of 92.2 Bcf/d.

Adding to the price outlook, EIA said on May 2, there was a 15% chance that the August Henry Hub futures contract would expire at more than $3. By comparison, EIA at the beginning of April said there was a 32% chance the $3 price would be eclipsed.

“The lower probability was driven by the declining futures price amid relatively low implied volatility, which indicates lower expectations by market participants that prices will change significantly in the near future,” EIA said. “Implied volatility has remained lower than the five-year range for three consecutive months. Lower natural gas consumption contributed to higher rates of injection into storage, which has helped to reduce supply concerns and put downward pressure on prices.”

In a review of annual financial reports from 25 domestic gas producers, EIA said cash flow from operations in 2018 exceeded expenditures for exploration and development (E&D) for the first time in the last six years. However, since the producers were not selected as a statistical sample, their results may not be considered representative of the U.S. gas industry as a whole.

“The larger increase in cash flow from operations reduced the net amount of funds that this group of producers needed from other funding sources, such as equity or debt. Even though spending on E&D was less than cash flow from operations, this group of producers added more than twice the amount of proved natural gas reserves than the natural gas they produced in 2018, which increased their resource base for future production.”

EIA said its analysis of domestic gas producers supported its projections for rising dry gas production, which is forecast to increase by 6.9 Bcf/d in 2019 and by 1.9 Bcf/d in 2020.

Natural gas futures on Thursday could not break out of a narrow range of gains and losses following a benign government inventory report and ongoing fallout from the ransomware attack on a major pipeline that is vital to the East Coast. The June Nymex contract crept in and out of the green throughout trading Thursday…