The Energy Information Administration (EIA) is modeling sizable natural gas production increases from several major plays next month, including the Appalachian Basin and the Haynesville Shale. 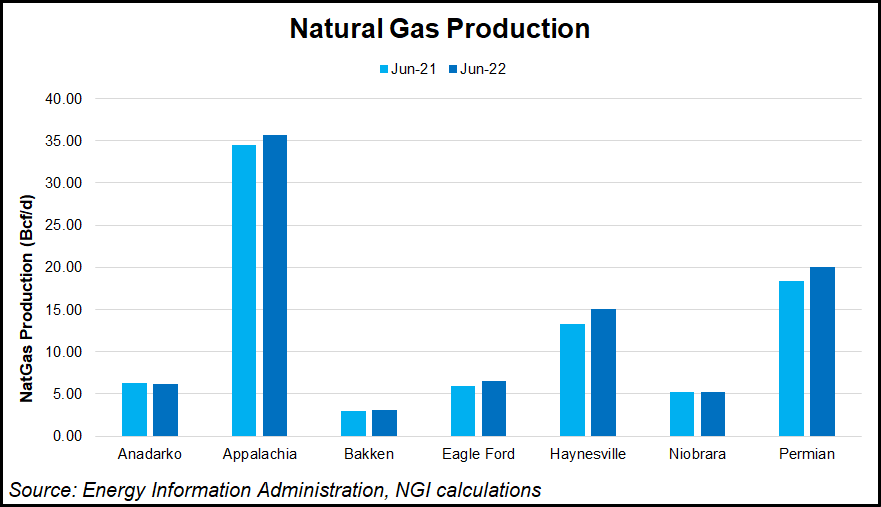 The Haynesville is set to lead growth among the seven regions from May to June, adding 239 MMcf/d to reach 15.102 Bcf/d, while Appalachian production is set to grow 194 MMcf/d month/month to 35.670 Bcf/d, the agency said.

Along with the Haynesville and Appalachia, the DPR tracks production trends across the Bakken, Eagle Ford and Niobrara shales, as well as the Anadarko and Permian basins. The oily Eagle Ford and Permian are expected to post natural gas production gains of 131 MMcf/d and 169 MMcf/d, respectively, from May to June, according to EIA.

Smaller natural gas production increases are expected out of the Bakken (up 27 MMcf/d) and the Niobrara (up 8 MMcf/d) for the period. Only the Anadarko (down 18 MMcf/d) is expected to see declining output from May to June, the DPR data show.

The latest DPR arrives at a time when supply adequacy concerns have fueled outsized volatility in natural gas futures trading. This month’s forecast production gains are largely in line with the growth rate modeled for the month-earlier period. A look back at recent DPR data shows overall natural gas output from the seven regions increasing at a quickening pace so far in 2022.

Total drilled but uncompleted (DUC) wells declined by 70 units from March to April, falling to 4,223, the latest DPR data show. The Permian DUC backlog saw the largest decrease at 46, leaving the play with 1,256 DUC wells as of April. Declines were also recorded in the Anadarko (down 12), Appalachia (down three), Bakken (down seven), Eagle Ford (down six) and Niobrara (down eight) regions. The Haynesville added 12 DUC wells to its backlog between March and April, according to EIA.