Both natural gas and oil production from seven key U.S. onshore plays is set to decline in September, continuing a downtrend that began earlier this year, according to the latest Drilling Productivity Report (DPR) published Monday by the Energy Information Administration (EIA). 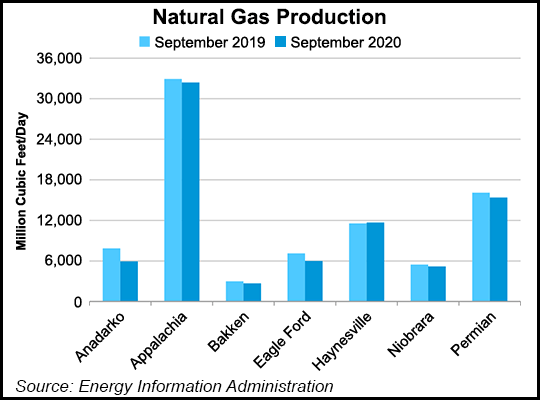 EIA expects natural gas production from the Anadarko, Appalachian, Denver Julesburg-Niobrara and Permian basins, as well as from the Bakken, Eagle Ford and Haynesville shales, to fall by a combined 421 MMcf/d from August to September, hovering at just over 79.2 Bcf/d.

Oil production from these regions is expected to decline by a combined 19,000 b/d month/month, with total output projected to remain at just over 7.5 million b/d.

Five of the seven plays are expected to post natural gas production declines in September, with EIA’s projections showing the Anadarko down 126 MMcf/d, Appalachia down 203 MMcf/d, the Eagle Ford down 56 MMcf/d, the Haynesville down 62 MMcf/d and the Denver Julesburg-Niobrara down 14 MMcf/d.

EIA’s DPR uses recent data on the total number of operating drilling rigs, estimates of drilling productivity and estimated changes in production from existing wells to project changes in oil and gas production for the seven key regions.

The Covid-19 pandemic helped to derail what had been more than three years of continuous production growth from the basins tracked in the DPR report. The falling output tracked in EIA’s DPR dataset has coincided with a precipitous drop in U.S. drilling rigs driven by the economic impacts of coronavirus mitigation efforts.

Primarily driven by the Permian, total drilled uncompleted (DUC) wells in the seven regions increased from June to July, up to 7,685 from 7,655, EIA said. The Permian added 40 DUCs to its total to reach 3,520 in July. The Bakken added six DUCs, rising to 902, while the Haynesville and Denver Julesburg-Niobrara each added one DUC month/month.