An expected decline in domestic natural gas production and increased power sector demand will push prices to an average $2.22/MMBtu in 3Q2020, but Henry Hub spot prices will average just $2.11 for the full year, according to the Energy Information Administration (EIA). 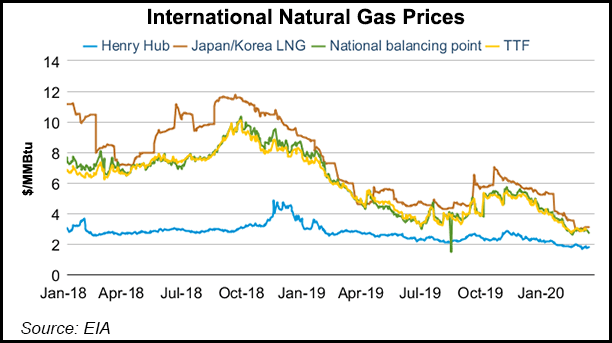 The full-year price forecast, included in EIA’s latest Short-Term Energy Outlook (STEO), is down a dime from the previous STEO.

Still, EIA expects a turnaround in 2021, with natural gas prices forecast to reach an annual average of $2.51.

Henry Hub spot prices averaged $1.91 in February, according to the STEO.

The front-month natural gas futures contract for April delivery at the Henry Hub settled at $1.78 on March 9, down 4 cents from Feb. 3. Warmer-than-normal weather patterns during the month continued to keep prices at historically low levels, according to the STEO.

“Europe and Asia have also experienced warmer-than-normal winter weather,” EIA said. “As a result, natural gas benchmarks for Europe (the Title Transfer Facility, or TTF, and the National Balancing Point, or NBP) and Asia (Japan Korea Marker, or JKM) have followed an even steeper downward trend compared with the Henry Hub contract. At the end of February, the JKM price reached near parity with TTF, although it typically trades at a premium.

“The decline of global natural gas prices and narrowing of spreads between markets likely reflects lower demand levels and reduced need for imports in European and Asian markets.”

U.S. dry natural gas production, which reached a record high 92.2 Bcf/d last year, is forecast to increase 3% to 95.3 Bcf/d this year, despite generally declining monthly production. From a peak 96.5 Bcf/d in February, production is expected to decline to 92.3 Bcf/d in December.

“The falling production mostly occurs in the Appalachian and Permian regions,” EIA said. “In the Appalachian region, low natural gas prices are discouraging producers from engaging in natural gas-directed drilling, and in the Permian region, low oil prices reduce associated gas output from oil-directed wells.” In 2021, EIA expects production, prompted by higher prices, will again be on the rise, averaging 92.6 Bcf/d for the year.

Last week, EIA reported a 109 Bcf withdrawal from U.S. natural gas stocks for the week ending Feb. 28, leaving total Lower 48 gas in underground storage at 2,091 Bcf, well above year-ago stocks (1,411 Bcf) and ahead of the 1,915 Bcf five-year average. EIA forecasts that total working inventories will end March at 1.9 Tcf, 12% more than the five-year average. In the forecast, inventories rise by almost 2.1 Tcf during the April through October injection season to reach almost 4.0 Tcf on Oct. 31.

The STEO had been scheduled to be issued March 9, but EIA delayed the release two days “to allow time to incorporate recent global oil market events,” including a price war launched by the Organization of the Petroleum Exporting Countries (OPEC).

Brent crude oil prices are expected to average $43/bbl in 2020, down from an average of $64 in 2019, and average $55 next year as declining global inventories put upward pressure on prices, EIA said.