Natural gas futures rallied for a fourth consecutive session on Friday as sweltering heat and revived export demand pointed to even tighter balances ahead of the peak summer cooling season. 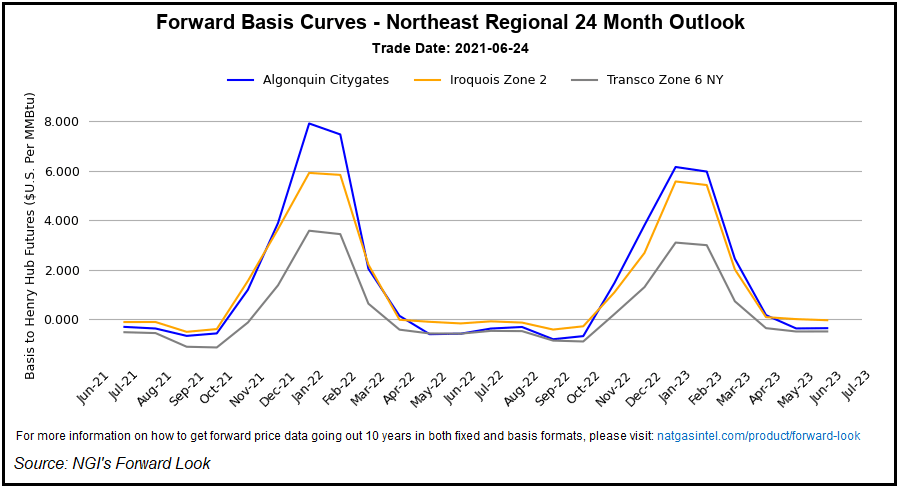 Sizzling temperatures baked much of the West and South Friday ahead of an expected weekend heat wave in the Pacific Northwest that threatened to overtax power grids. Utilities braced for residents and businesses across Washington, Oregon and neighboring states to crank up air conditioners to endure a rare rash of triple-digit highs across the region.

Despite a “weak spot” for temperature deviations versus normal in the middle of the nation into Texas, national gas-weighted degree days are on track to approach record levels over the final days of June and into early next month, Bespoke Weather Services said Friday.

“All the while,” the forecaster added, “the West remains super-hot, with all-time records set to fall in the next few days…We continue to forecast a hotter overall July as well, as the same pattern looks to prevail, with a northern focus of heat.”

Liquefied natural gas (LNG) gathered further momentum Friday as well. After dropping below 10 Bcf on several days in the first half of June because of maintenance work at export facilities, feed gas volumes approached 11 Bcf on Friday. With maintenance work winding down and demand from U.S. export destinations in Asia and Europe elevated following a cold start to 2021 that depleted stockpiles, LNG levels are expected to hover near 11 Bcf or higher most of the summer.

“The amount of gas in storage in Europe is continuing to deteriorate relative to seasonal norms, falling 400 Bcf below five-year average levels,” EBW Analytics Group said Friday. “The massive storage deficit, coupled with high carbon prices in the European Union and competition for LNG with Asian buyers, has driven gas prices” and demand.

The latest storage data affirmed the robust demand story, further propelling futures. The U.S. Energy Information Administration (EIA) on Thursday reported a 55 Bcf injection into storage. The result was 60 Bcf below last year’s injection and 28 Bcf below the five-year average. It missed the low end of estimates in major surveys ahead of the report.

Total working gas in storage as of June 18 stood at 2,482 Bcf. That was 513 Bcf below the year-earlier level and 154 Bcf below the five-year average, according to EIA.

“The massively tight supply/demand balance reflected” in the storage data may lead to long-term ramifications, Bespoke said. “End-of-season storage levels continue to be projected low enough to cause concerns heading into the upcoming winter.”

Wood Mackenzie analyst Eric Fell said compared to degree days and normal seasonality, the latest injection appeared tight by 2.8 Bcf/d versus the five-year average. That is “a material shift versus the last five weeks, which looked slightly loose on average.”

Fell said the light injection resulted from a week/week decline in net supply of 10 Bcf, with production falling during the week. Power demand also ticked higher during the week.

The EIA print sets the stage for a “solid move across the forward curve,” analysts at Tudor, Pickering, Holt & Co. (TPH) said in a note to clients.

Looking at regional storage trends, they highlighted a “surprise draw” of 4 Bcf in the EIA South Central region and a build in the Pacific that came in tight compared to historical norms.

“With Mexico exports continuing to run ahead of our modeling (7.5 Bcf/d week-to-date)” and LNG returning to around 11 Bcf, “South Central appears likely to remain tight ahead of seasonal draws that perk up in July and August,” the TPH analysts said Friday. This comes as “hot, hot, heat in the eight- to 14-day forecast appears likely to keep the Pacific market similarly tight.”

Heat permeated most of the Lower 48 during the final trading session of the week. NatGasWeather said hot high pressure held steady across the West and into Texas, with highs ranging from the 90s in the South to above 100 in parts of Arizona, Nevada and California.

The anticipated record-breaking heat this weekend in the Northwest and into the Mountain West added to the upward price momentum.

While temperatures in the Northeast were pleasant Friday, more intense heat was expected to move in over the weekend. With highs near 90 expected in Boston, Algonquin Citygate spiked $1.250 to $3.875.

National demand was forecast to temporarily ease to begin July. However, it was expected to increase again July 4-10, “as upper high pressure strengthens over the southern and eastern U.S., while becoming warm to very warm over the northern tier,” NatGasWeather said. “What also makes the coming pattern bullish is there remains solid potential for above normal temperatures to continue over much of the U.S. through the second week of July.”

Well into the first half of July, the forecaster said, the western, southern, and eastern portions of the United States will be very warm to hot with highs of mid-80s to 100s for strong demand.