Natural gas futures see-sawed in a narrow range of gains and losses through much of trading Wednesday, but the prompt month ultimately climbed for a third consecutive day as demand looked to outstrip supply. 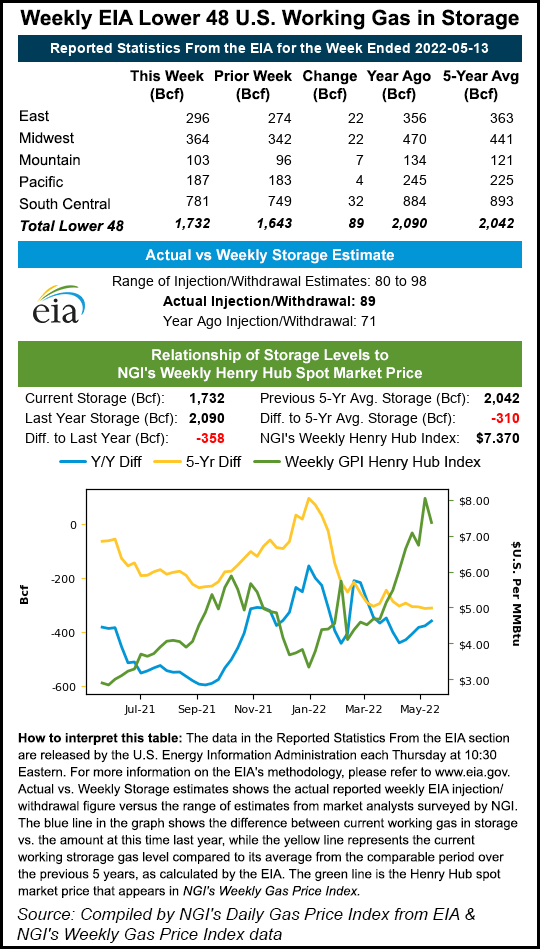 Futures and cash prices have gained as production has lagged.

Output fell a third day to about 93.7 Bcf, according to Bloomberg’s estimate. Production was down 1% day/day and held well below the 97 Bcf high of recent months. Shoulder-season pipeline maintenance has proven a steady drag on output during a stretch when demand has held strong.

“Short of production ramping up, I don’t see the market losing momentum,” Samco Capital Markets’ Jacob Thompson, managing director, told NGI. “You’ve got demand here, Europe, globally. At some point, the world brings on more renewables, but they would have an awful big hole to fill” without natural gas in the mix.

U.S. liquefied natural gas (LNG) volumes on Wednesday were comfortably above 12 Bcf for a third straight day amid strong demand, according to NGI estimates. Europe escalated calls for U.S. exports of the super-chilled fuel to supplant Russian supplies. Countries across the continent are clamoring for American LNG as part of ongoing efforts to dramatically reduce reliance on Russian gas ahead of next winter.

LNG feed gas demand, hovering near a monthly high, is also supporting demand in the physical market. U.S. officials, trying to walk a delicate balance between helping Europe and hastening a transition to renewable fuels, continue to profess support for the continent via LNG in the near term. This points to strong exports activity through 2022.

“Russia’s war and its recent decision to cut gas supplies to Poland and Bulgaria, threatening other countries with the same, show that it is not a trusted partner,” U.S. Treasury Secretary Janet Yellen said in a speech this week. “The United States is committed to working with Europe…to meet your energy needs, while also breaking dependence on Russian energy. This includes working with other partners to increase export volumes of LNG to Europe” even if it “blunts some of our immediate climate goals.”

Domestic weather, meanwhile, continues to play a vital role on the demand side.

NatGasWeather said Wednesday the latest forecasts teased “a rather hot U.S. pattern attempting to gain ground over the southern and eastern” expanses of the country in coming days.

“Texas and surrounding states will remain hotter than normal the next several days with highs holding in the 90s to lower 100s for strong early season cooling demand,” the firm said.

Such conditions would follow a similar bout of heat in the southern reaches of the country last week. That, combined with “woefully underperforming” production, could impact the storage injection for the week ended May 13, NatGasWeather said, potentially adding to already simmering supply worries.

While utilities have begun to inject more gas into underground storage for use next winter, supplies remain notably light relative to historic norms. Demand proved strong in the second half of last winter, depleting inventories.

The U.S. Energy Information Administration (EIA) is scheduled to release its latest storage print at 10:30 ET on Thursday.

Major polls showed estimates coalescing around an injection in the high 80s Bcf. Bloomberg’s survey, for one, ranged from 83 Bcf to 93 Bcf, landing at a median expectation for an injection of 89 Bcf. Results of Reuters’ poll spanned estimated increases of 80 Bcf to 98 Bcf, with a median of 88 Bcf.

That would compare with a five-year average injection of 87 Bcf for the period. A year earlier, EIA printed an increase of 71 Bcf.

EIA previously reported an injection of 76 Bcf natural gas into storage for the week ended May 6. The increase lifted stocks to 1,643 Bcf, but left them 312 Bcf below five-year average levels, according to EIA.

Hubs in West Texas, where temperatures have spiked this week, continued to help lead the bulls on parade. Transwestern climbed 17.5 cents day/day to average $7.975, and Waha gained 17.5 cents to $7.970.

In addition to the intense heat in Texas and bordering states this week, NatGasWeather expects highs in the 100s in the Southwest. Prices also bounced higher in that region Wednesday, with El Paso S. Mainline/N. Baja up 23.0 cents to $8.650.

After a brief respite this weekend in some areas of the South, a spate of lofty high temperatures will return and expand next week, forecasters projected.

“The southern and eastern U.S. will be very warm to hot with highs of 80s-90s,” driving another round of steady cooling demand in the week ahead, NatGasWeather said.

Maxar’s Weather Desk similarly forecast a pattern in the 11- to 15-day period (May 28-June 1) that would result in widespread above-normal temperatures for the Lower 48.

The pattern for late May into early June supports “continued rounds of cool and unsettled conditions in the Northwest,” the forecaster said. However, “warmer themes are downstream, with above-normal temperatures being in the Southwest and from the Plains to the East Coast.”