Forecasts may be frosty in the days leading up to Christmas, but a lack of reinforcing cold shots seen in the days after sent natural gas prices barreling lower Wednesday. The Nymex January gas futures contract finally broke out of its recent trading wedge as it plunged 27.1 cents to settle at $4.136. February tumbled 22.3 cents to $4.035, and March dropped 18.8 cents to $3.853. 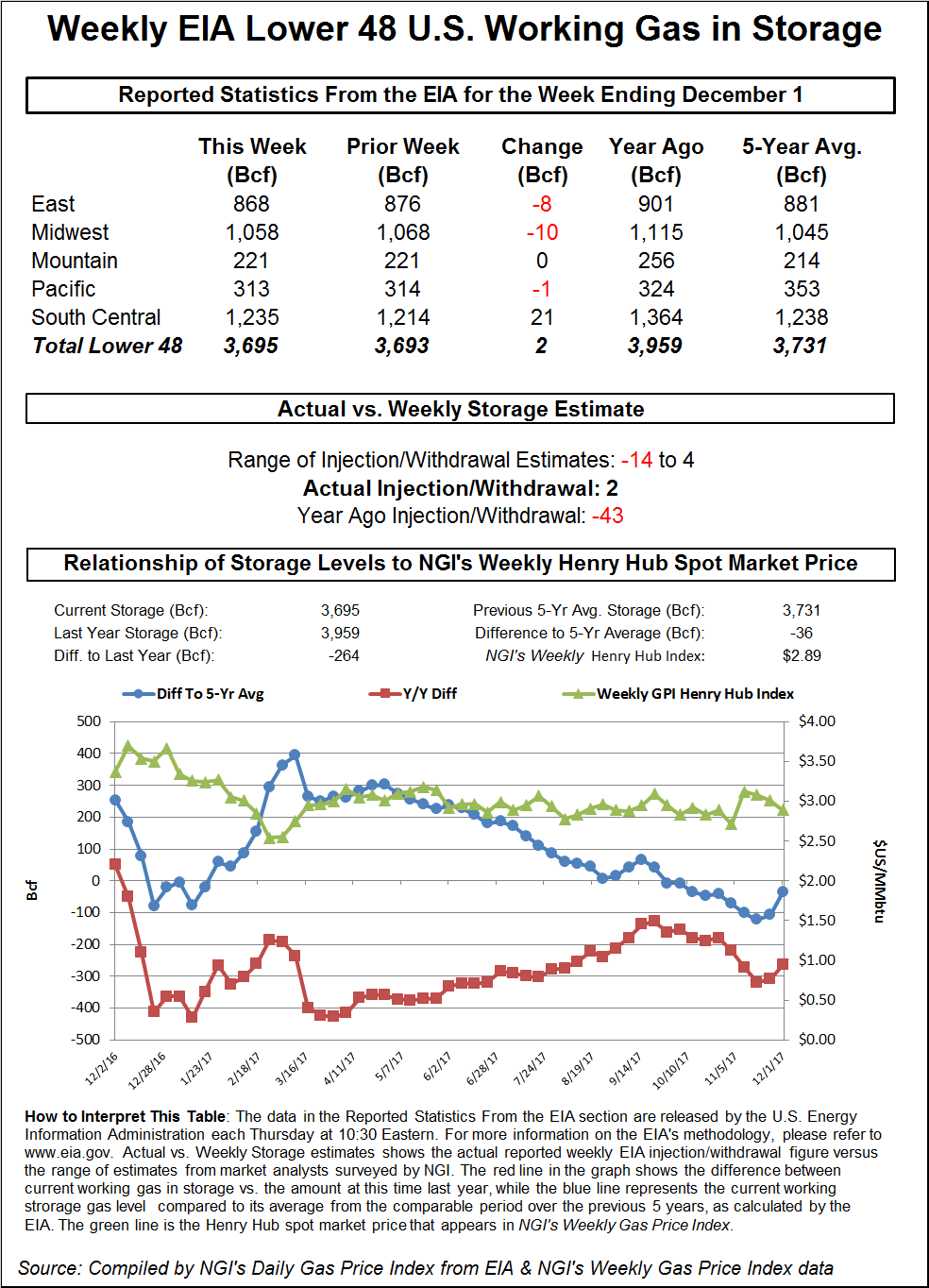 Spot gas prices also retreated as mild high pressure was set to move across the country and linger for the next 10 days or so before that pre-Christmas cold front moves in. The NGI Spot Gas National Avg. fell 34 cents to $4.205.

On the futures front, the Nymex January contract started off Wednesday’s session more than a dime lower than Tuesday’s settle as overnight European weather guidance trended milder for the Dec. 23-27 period, followed by the Global Forecasting System (GFS) model doing the same with its early morning run, according to NatGasWeather.

The midday GFS held the milder trend, still showing a decent shot of cold into the United States Dec. 23-24 but with conditions moderating across the important eastern part of the country for Dec. 25-27. “Essentially, after teasing colder patterns to open the week for the last week of December, the weather data has backed off some. It’s still a cool pattern, just not impressively cold,” NatGasWeather said.

The forecaster cautioned, however, that frigid air was still expected into Canada, so it wouldn’t take much for colder trends to quickly return.

Wednesday morning’s weather model runs resulted in a loss of 6.0 gas-weighted heating degree days (gHDD) and 8.6 Bcf of demand, according to EBW Analytics. “Since the Friday after Thanksgiving, demand has fallen 46 gHDDs and 75 Bcf and yet, despite tremendous volatility, the January contract is essentially flat as bullish optimism has held up Nymex winter futures,” CEO Andy Weissman said ahead of Wednesday’s market open.

Technical support for the January contract, however, gave way when the prompt month settled at its lowest level since Nov. 15. January prices are at a very “stern support level” right now, according to NGI’s Patrick Rau, director of strategy and research.

With weeks to go before the peak of the winter season — not to mention recent weather model volatility — Rau didn’t expect prices to break too much lower before a rebound could take place. “This could be as low as we get without giving up on winter,” he said.

Looking out at the remainder of the winter season, EBW said bearish year/year storage comparisons to last year’s bomb cyclone event may be a catalyst lower if colder weather does not emerge. The last week of December 2017 into mid-January saw a net withdrawal of more than 1.0 Tcf and weekly withdrawals reach as high as 359 Bcf and 288 Bcf, the firm said.

“Year/year comparisons are almost certain to be bearish, and, should the storage deficit plummet more than 500 Bcf as projected under current winter forecasts, may reassure the market of adequate winter supplies,” Weissman said.

Looking further along the strip, the market appeared to be “sensing some upward price risk” for the 2019 injection season contracts, which have gained since late November, according to Energy Aspects. The Nymex summer strip (April-October) settled Wednesday at $2.857.

“Our current view still places end of March inventories at 1.3 Tcf. That figure is based on 10-year normal weather and makes no assumption for freeze-offs or other winter weather disruptions to production, suggesting there is downside risk to that number,” the firm’s analysts said.

Energy Aspects current view is that end-of-March inventories are thinly balanced. Assuming 70 Bcf of freeze-offs over winter (which would be at the higher end of typical interruptions over the last few years), balances would still be thinly balanced near 1.23 Tcf, the firm said.

“Importantly, though, there has been no major shift in our end-March storage inventory projection since late November,” Energy Aspects said. “At this point, there remains a risk that end-of-March storage could move from thinly balanced to too low. By that token, the end of March could still move from thinly balanced to a carryout that would begin to look high for the fundamentals.

“We expect this summer to remain heavy on supply, with production gains forecast on the order of 6.5 Bcf/d year/year (y/y),” the firm’s analysts said.

Indeed, North American exploration spending in 2019 is tracking higher for the third consecutive year, with natural gas budgets poised for a positive reset, according to energy analysts with insights on capital outlay. More than half of all respondents to a survey by Evercore ISI indicated “they would revise their 2019 budgets higher at natural gas prices below current levels,” analyst James West said.

The average price that would prompt higher spending in 2019 is $4.05/MMBtu, about 10% below the current spot rate, according to Evercore, while a “solid 50%” of exploration and production companies surveyed “would increase their budgets if gas prices stay at current levels of around $4.45/MMBtu.” Meanwhile, gas prices need to fall to $2.75/MMBtu for budgets to begin revising lower. Most of those surveyed said they would not cut their budgets unless gas prices fell to $2.00 or below.

Spot gas prices across the country continued to retreat from recent highs as mostly mild conditions were expected to cover the United States through next week or more, apart from occasional weather systems that bring localized cooling, according to NatGasWeather.

One of these systems was tracking through the West and expected to arrive in Texas and the South Thursday and Friday with rain, snow and colder-than-normal temperatures, the firm said. There was another fast-moving weather system forecast to bring a shot of cooling to either the Northeast or Mid-Atlantic Coast early next week. Additional weather systems were expected late next week, “but none cold or widespread enough to offset the rest of the country being milder than normal,” NatGasWeather said.

Some of the steepest declines were seen in California and the Rockies, where losses of more than 60 cents were fairly common. PG&E Citygate spot gas plunged 72.5 cents to $4.455, while Opal dropped 69.5 cents to $4.105.

Though substantial in their own right, declines across the country’s midsection were far less significant than those on the West Coast. OGT next-day gas was down 36.5 cents to $3.405, while most other regional pricing hubs posted losses of less than 30 cents. Similar declines were seen in the Midwest, where Chicago Citygate tumbled 28 cents to $3.99.

In the Northeast, New England pricing hubs notched decreases of more than $1 as temperatures were expected to remain a chilly in the low 30s on Thursday but then climb to the upper 40s by the weekend, according to AccuWeather. Elsewhere in the region, Transco Zone 6 NY next-day gas dropped 35 cents to $4.39.

The group’s derived estimate of storage at Cove Point at that time had inventory sitting at around 6 Bcf, which indicated there was enough space to accept a cargo. Genscape’s LNG group noted that this event could be handled without pipeline gas deliveries to the terminal and liquefaction shutting down as current prices for winter forwards at Transco Z5 near Cove Point are more attractive for a Trinidad shipper than netbacks they could receive by sending cargoes to Europe. Transco Zone 5 South January prices sat Tuesday at $8.735, while February was at $8.38 and March at $4.454, according to NGI’s Forward Look.

Meanwhile, the Permian Basin in West Texas was home to the only gains seen across the country, even though they were rather small at around a nickel at most points. The modest increases occurred even as Natural Gas Pipeline Company of America’s Compressor Station 167 in Lea County, NM, was expected to remain restricted through Thursday. The pipeline on Tuesday cut off 230 MMcf/d of receipts from the Lockridge Lateral on Segment 9 in NGPL’s Permian Zone.