Despite the lack of clarity on the long-term impacts from this week’s Arctic storm, news that power had been restored to most Texas residents on Thursday and warmer weather seen moving into the Lower 48 by next week sent natural gas futures prices crumbling. 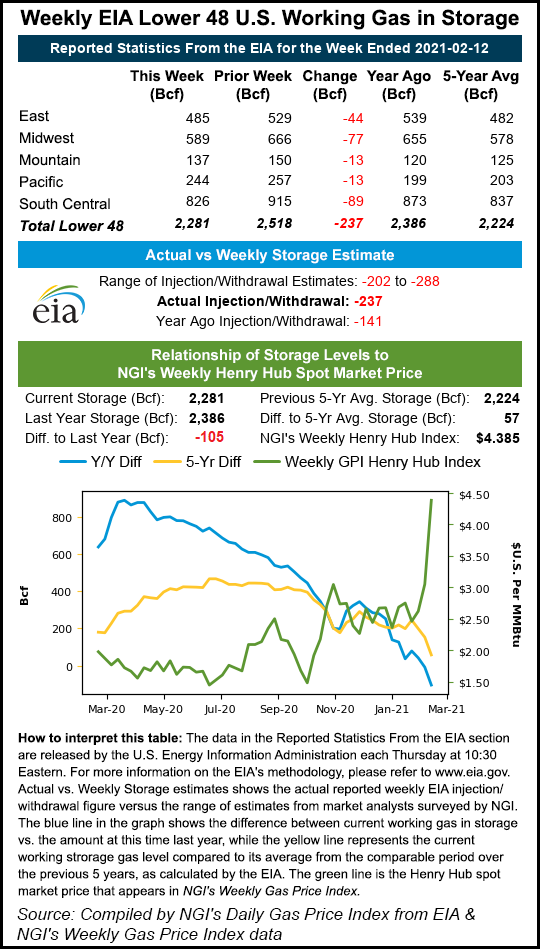 A huge bearish miss in the latest government storage data sealed the drop, with the March Nymex futures contract tumbling 13.7 cents to settle the day at $3.082.

A dramatic fall also occurred in the spot gas markets, where Oklahoma next-day gas plunged back to the single-digits after surging well into the thousands on Wednesday. Texas prices also fell hard, helping to send NGI’s Spot Gas National Avg. tumbling $31.765 to $8.860.

With temperatures slowly starting to climb from the unprecedented lows experienced earlier this week, gas prices too began to normalize on Thursday. Futures action was still volatile, though, with large decreases seen early in the trading session as the latest weather models teased at a more variable, rather than downright bitter, pattern beginning next week.

Bespoke Weather Services said although there remains some North Atlantic Oscillation (NAO) blocking that typically leads to colder conditions, a warmer signal is developing that portends at least some variability in the 15-day outlook. The southern United States is expected to see warmer weather, finally, as is the East, but there remains “cold air on the maps” from western Canada down into parts of the Rockies and Plains.

“With the NAO hanging negative, there is always the risk that a piece of this breaks off into the eastern half of the nation, which is why we hold to the idea of ‘variable’ into March, neither warm- nor cold-dominated,” Bespoke said.

Regardless of the forecast, market fears related to the energy crisis in Texas appeared to be subsiding on Thursday. The forecaster warned, however, that “no one really knows anything yet regarding any potential longer-term impacts.” Still, “it is encouraging to see power coming back in many parts of Texas, signaling that generation is there.”

As of Thursday morning, the state’s electric grid operator had restored power to all but around 500,000 households and businesses. The Electric Reliability Council of Texas (ERCOT) said it made “significant progress” overnight restoring power, although some outages still remain throughout the state.

Energy emergency conditions were still in place as the grid operator and transmission owners work to restore the remaining customers that are without power, according to ERCOT.

“We’re to the point in the load restoration where we are allowing transmission owners to bring back any load they can related to this load shed event,” said ERCOT Senior Director of System Operations Dan Woodfin.

While there is no additional load shed occurring at this time, a little more than 40,000 MW of generation remains on forced outage because of the weather event. Of that, 23,500 MW is thermal generation such as natural gas and coal, and the rest is wind and solar, according to ERCOT.

“It is possible that some level of rotating outages may be needed over the next couple of days to keep the grid stable,” the grid operator said.

Meanwhile, several gas pipelines continue to face operational issues. El Paso Natural Gas and Kern River Gas Transmission both posted forces majeure on Wednesday related to the performance of several locations along the system and mechanical issues at compressor stations, respectively. Northern Natural Gas Pipeline also continued to operate Thursday with restrictions across its system. On the other hand, Golden Pass Pipeline lifted its force majeure at more locations in a sign that it continues to gradually return to normal operating conditions.

Production freeze-offs, meanwhile, remain exceptionally high, and revisions in the data have shown even lower output levels than previously reported. Production came in at around 71 Bcf on Tuesday, down 3.4 Bcf day/day, according to Wood Mackenzie. The firm said, however, these low production numbers could be understated, as there could be a fair amount of gas in the Permian Basin and on intrastate pipelines that are being delivered directly to meet local demand rather than showing up as production in its models.

Restoring full production could take several weeks, according to EBW Analytics Group. While frozen wells and other equipment should begin to thaw over the weekend, when temperatures in Texas are expected to return to the 50s, removing ice is just the first step.

“Pipelines and wells will need to be carefully inspected for damage,” EBW said. “Rapid thawing and melting of snow is likely to create muddy roads, delaying the start of the work.”

Even if equipment is intact, restart cannot begin until power is restored. Further, in many instances, repairs will likely be required, “one well at a time for thousands or even tens of thousands of wells,” according to EBW.

Limitations on the number of experienced personnel with the requisite skills and the sheer scope of the effort may further delay the process, the firm said. “Even if the majority of wells can be brought back online in the next two to three weeks, 3-5 Bcf/d or more of production nationally could remain offline for most of March.”

EBW said this may lead to much larger-than-previously expected withdrawals from storage in the coming weeks, which would help support prices for the March and April contracts.

However, predicting just how storage draws may take shape in the coming weeks may be a Herculean effort given all the moving parts. Production freeze-offs, storage restrictions and sky-high prices could make estimating storage draws even more difficult than usual. There’s also the massive amount of demand that was knocked off the system, whether voluntarily or not.

For example, although the majority of homes and businesses had their power restored by early Thursday, industrial customers were among those that were left in the dark, according to ERCOT. The grid operator said customers that remain without power likely fall into one of three categories, including large industrial facilities that voluntarily went offline to help during the energy emergency. Others may be without power because of ice storm damage on the distribution system or because of the emergency load shed that requires them to be restored manually.

Meanwhile, exports, both in the form of pipeline exports to Mexico and via liquefied natural gas (LNG), have been impacted. On Wednesday, Texas Gov. Greg Abbott ordered the state’s gas producers to temporarily not transport gas across state lines in an effort to increase the amount of gas-fired power generation available in Texas. The order is in effect until Sunday.

This order could have serious implications for the Texas natural gas markets, as well as surrounding markets, according to Wood Mackenzie. Specifically, the firm plans to look at exports to Mexico and LNG volumes. “It is important to note that current day nominations have seen major revisions so far this week, but we will continue to monitor the situation.”

With the complications brought on by the Arctic event still being digested, Thursday’s huge miss by the market in predicting how much storage was withdrawn last week may serve as a sign of things to come.

The Energy Information Administration (EIA) reported that inventories for the week ending Feb. 12 fell by 237 Bcf, whereas most estimates, though wide ranging, coalesced around a draw near 250 Bcf.

Bespoke, which too had pegged the draw at 250 Bcf, said despite the much lower figure, it classifies the EIA print as “neutral”, impact wise, as it believes the market is much more concerned with how long production, power generation and other infrastructure may be out of commission amid the deep freeze that paralyzed Texas.

“The sentiment was already in a more bearish mode prior to this number,” Bespoke said. “We do not feel this number really moves the needle definitively, given all the other unknowns out there currently.”

Broken down by region, South Central withdrew a massive 89 Bcf from storage, including 61 Bcf from nonsalt facilities and 28 Bcf from salts, according to EIA. The Midwest pulled out 77 Bcf, and the East took out 44 Bcf. Stocks fell by 13 Bcf in both the Mountain and Pacific regions.

Total working gas in storage stood at 2,281 Bcf, down 105 Bcf from year-ago levels and 57 Bcf above the five-year average, EIA said.