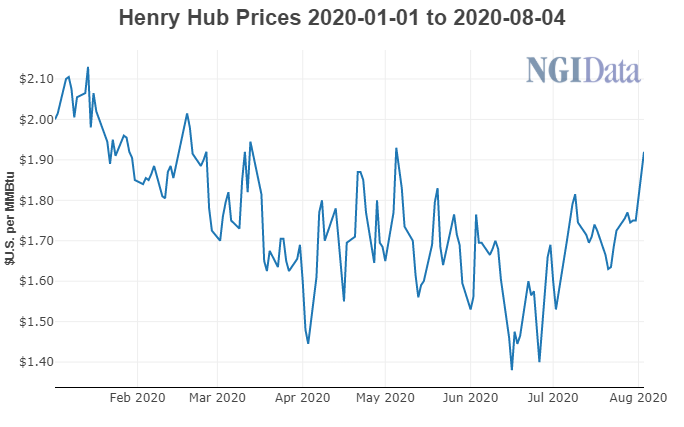 Analysts including Peter Helles said gas had reached a “turning point,” and they also anticipate European and Asian demand for U.S. liquefied natural gas (LNG), depressed for months by the shocks of the pandemic, will recover this year and ramp up in 2021.

“We expect injections to slow in the coming months to avoid end of season congestion — barring a very mild rest of summer — and thus do not see much further downside to front month prices from here,” the BofA analysts said.

U.S. storage inventories are forecast to reach 3.92 Tcf by the end of October, well below the 4.05 Tcf record set in 2016. “LNG demand will ramp up starting September and rise strongly into the winter as Europe and Asia free up storage capacity,” the analysts said.

Genscape Inc. said feed gas demand jumped higher over the weekend, with its estimate showing a 740 MMcf/d day/day increase on Saturday, “marking a significant uptick in demand as a result of decreased cargo cancellations.” The firm said feed gas demand from interstate pipelines stood at 3.85 Bcf/d, which is 0.68 Bcf/d more than July’s average of 3.17 Bcf/d.

EBW Analytics Group, meanwhile, said Monday forecasts are calling “for significantly warmer weather than previously expected starting next week. While temperatures are not expected to be nearly as hot as in recent weeks, bulls are likely to be strongly encouraged by this shift.”

“Heading into the winter, we then see the balance tightening rapidly as LNG demand recovers to full capacity and U.S. gas production remains flat,” the analysts said.

The U.S. Energy Information Administration (EIA) reported an injection of 26 Bcf into storage for the week ending July 24. That was 7 Bcf lower than the five-year average and marked the lowest level of the summer, thanks to strong power burns.

The BofA analysts look for balance tightening to accelerate in 2021, with production returning more slowly than global industrial demand.

“We do see some upside risk to 2021 summer prices as U.S. prices may have to rise further to ration demand for LNG and power generation, or to stimulate dry gas production,” analysts said.

Of course, the upbeat outlook is predicated on continued economic recovery from the recession that was imposed by the pandemic last spring, said the BofA team. There is downside risk “from the recession turning out to be worse than what we currently project.”