Equitrans Midstream Corp. said in a regulatory filing on Monday its largest customer, EQT Corp., is temporarily curtailing 1.4 Bcf/d of production in Ohio and Pennsylvania. 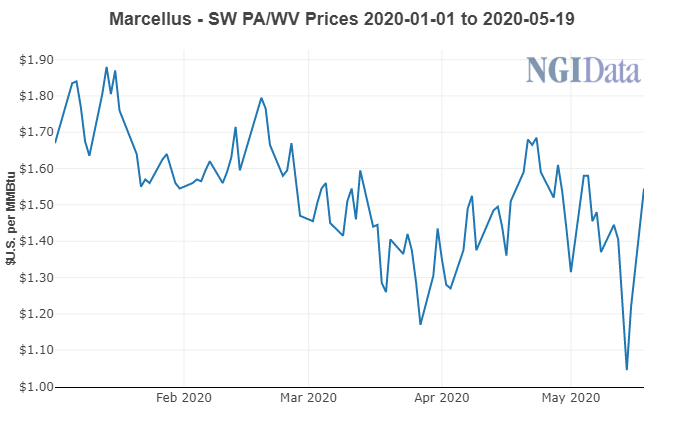 Equitrans said in the filing it expects the curtailments to last up to 45 days. It revised the forecast for second quarter net income, but full-year guidance remains unchanged.

Management of Appalacahian pure-play EQT, the nation’s largest natural gas producer, said earlier this month it could join peers in the Marcellus and Utica shales to defer some production in anticipation of better prices later this year. EQT produced 4.2 Bcfe/d in 1Q2020.

Natural gas futures spiked on news of the curtailments, according to EBW Analytics Group. The June New York Mercantile Exchange contract settled up 13.7 cents, and July jumped 12.6 cents. EQT stock also opened higher on Tuesday at $13.07 and was up by nearly 3% at midday.

“The EQT curtailment, which could last several weeks, could reduce injections in late May and June by as much as 10 Bcf/week, keeping the storage surplus from rising further,” EBW said.

The Energy Information Administration also said Monday it expects oil and natural gas production from seven of the most prolific U.S. onshore unconventional plays will be down in June from May, a second consecutive decline as the coronavirus continues to dent energy demand and prices.

EIA expects gas production to decline month/month in each of the plays, with total production falling to 81.47 Bcf/d, compared with 82.25 Bcf/d in May.