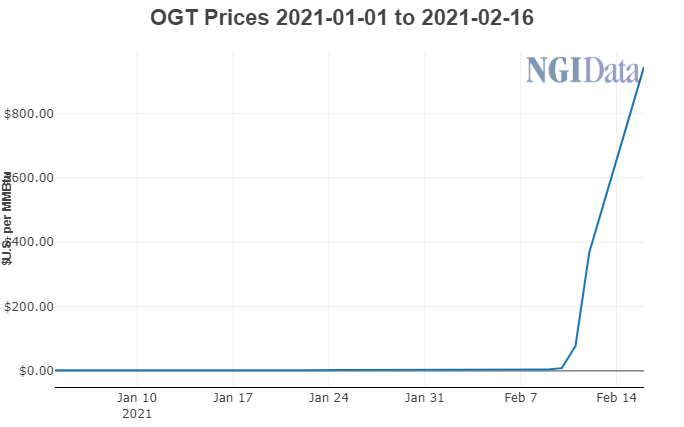 Cash prices remained volatile after the weekend, with next-day gas in Oklahoma surging as high as $999.00 amid the unparalleled winter blast that slammed the region. NGI’s Spot Gas National Avg. rose $18.800 from Friday’s levels to $80.760.

The American Gas Association said 151.7 Bcf of natural gas was delivered in the United States on Sunday and 149.8 Bcf was delivered on Monday, setting a record for demand over the two-day period. Monday was the second highest delivery day ever.

However, the record demand was not without its challenges. Operational issues on more than 30 natural gas pipelines, as well as numerous storage facilities and gas plants, were reported amid the multi-day stretch of bitter weather, reducing supplies as extreme cold blanketed the country’s midsection.

Northern Natural Gas declared a critical day across its system for Wednesday. The pipeline indicated it is at “imminent risk” of experiencing reduced receipts at pipeline interconnects in its market and field areas. A standard operating limit was in place by late Tuesday.

“It is uncertain when this situation will improve. As this situation continues, Northern’s pipeline system integrity will be negatively impacted if deliveries are in excess of receipts, resulting in low line pack levels across the entire system,” it said.

Wood Mackenzie said other systems were putting in place “human needs” requirements. The firm said the Railroad Commission of Texas (RRC) and Enable Gas Transmission implemented a requirement that the transportation, delivery and/or sale of gas be for serving human needs customers as best as possible. A state of emergency also was declared in Texas.

The state’s power grid operator, which had warned of potential record demand ahead of the weekend, avoided a fresh high, but only because it implemented rolling blackouts, and then more sustained outages. On Monday morning, more than 4 million Texas homes and businesses had no electricity, with thermometers reading 40 degrees inside Houston homes and lower farther north. About 10,500 MW of customer load was shed at the highest point, according to the Electric Reliability Council of Texas (ERCOT).

“This abysmal performance raises serious questions regarding the reliability of the electricity grid during periods of extreme winter weather, and the ability of regulators and bulk power system operators to properly supervise the operation of the grid,” said EBW Analytics Group. “A thorough investigation is likely,” potentially leading to major changes in market rules and Federal Energy Regulatory Commission oversight of grid operators.

By Monday afternoon, ERCOT said about 500,000 households had their power restored. Another 400,000 were expected to be restored by Tuesday afternoon because of additional wind and solar output, as well as additional thermal generation that was expected to be available. The amount ultimately restored would depend on how much generation is actually able to come online.

“ERCOT is restoring load as fast as we can in a stable manner. Generating units across fuel types continue to struggle with frigid temperatures.”

RBN Energy LLC natural gas analyst Sheetal Nasta said in many ways, this event echoes past such events and all that comes with them: record demand, supply reductions as wellheads freeze-off, a proliferation of pipeline and storage constraints as the market scrambles to secure enough gas to meet the incremental demand. “But it’s fair to say the gas market has not seen anything quite to this level, and definitely not at these prices.”

On the supply front, around 7 Bcf of production had been curtailed because of freeze-offs, according to EBW. Much of that was concentrated in the Permian Basin, where disruptions started last Thursday as temperatures plunged. Losses could remain high for most of the rest of this week.

The unprecedented chill also took its toll on liquefied natural gas (LNG) demand. Deliveries to the terminals via interstate pipelines fell to 5.45 Bcf Monday, down from 9.16 Bcf on Friday, according to NGI data. The declines were driven by facilities along the Gulf Coast, where some of the worst winter weather has touched down in an otherwise temperate part of the country. Nominations had bounced back by 2 Bcf day/day on Tuesday and were at 7.70 Bcf.

When Will It End?

Weather forecasts show the frigid conditions continuing through Friday as below-average temperatures are to continue over the Plains and Texas. Overnight lows are seen dropping below zero in some areas and into the 20s in others, according to NatGasWeather. However, this is not quite as “dangerously cold” as the previous few nights, the forecaster said, and the bitter conditions are expected to slowly moderate beginning Wednesday.

The midday Global Forecast System was milder trending for Feb. 26-28 by seeing a stronger and warmer ridge extending from Texas to New England for light national demand. The model, however, still favors stronger cold fronts into the Rockies and Plains and then slowly spreading eastward March 2-4.

The key question facing the market is whether there is any longer-term damage. If so, this is decidedly bullish, according to Bespoke Weather Services. If not, then the curve may be “too elevated” unless there are additional cold waves versus normal into the month of March.

The unrelenting cold roiled cash markets, so much so that the Intercontinental Exchange (ICE) on Tuesday increased the maximum allowable price at certain U.S. physical locations listed on ICE.

“The widespread nature of this ongoing polar plunge has meant that just about every region needs more gas, firing up competition between pricing points to keep more gas local that would otherwise flow to other regions,” said Nasta.

The other side of that coin, she said, is that regions that have seen production stagnate or decline in recent years and rely on other regions for their gas, “are suddenly left, well, out in the cold, as outflows retreat.”