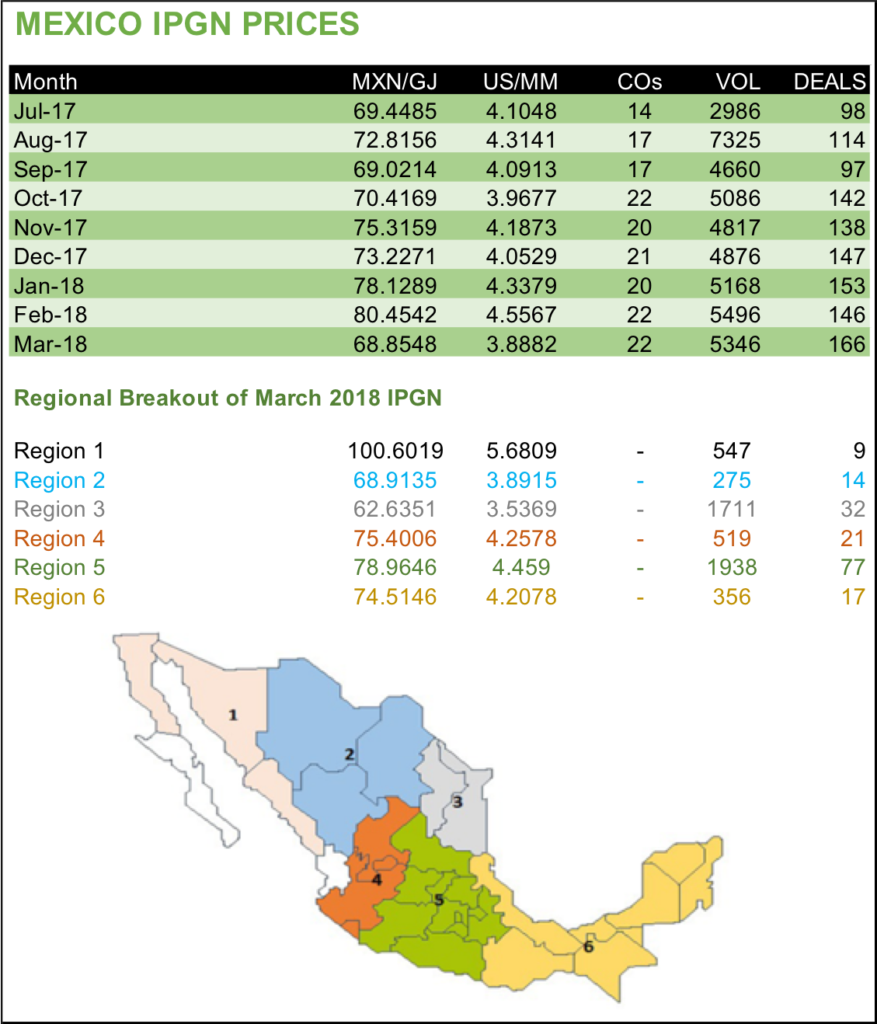 The average price for all transactions in the Mexican gas market during March was 68.855 pesos/gigajoule (GJ), compared to 80.454 pesos/GJ in February, or $3.888/MMBtu versus $4.557/MMBtu, according to the energy regulator.

The March figure was the lowest price recorded in all nine months for which the CRE has released its national index, known as the IPGN. The regulator began publishing a regional breakout of the index only last month.

March trading volumes averaged 5.35 Bcf/d, down about 150 MMcf/d from 5.50 Bcf/d in February. Mexican marketers reported a total of 166 deals during the month, versus 146 in February. The CRE screened out 10 statistically atypical deals before calculating the national average price for March.

National gas demand in Mexico is closer to 7.9 Bcf/d. However, Petroleos Mexicanos (Pemex), which produces most of the domestic gas, uses much of that output for reinjection and other upstream activities that are unlikely to be captured in the CRE indexes. Imports supply around 85% of all marketable dry gas in Mexico, according to official estimates.

CRE calculates prices and volumes using data collected from the monthly post-transaction reports that are mandatory for all gas marketers operating in Mexico. The resulting indexes show an average price, combining the price per molecule and transport costs, for all trades billed during the previous month.

March’s regional price indexes ranged from 62.635 pesos/GJ in northeast Region 3 to 100.602 pesos/GJ in northwest Region 1, or $3.537/MMBtu to $5.681/MMBtu. This regional spread roughly mirrors the pricing data reported for February, following revisions by the CRE.

The regulator has modeled the six trading regions on supply patterns, Mexico’s pipeline infrastructure, and the prices and volumes reported in each state, among other factors. The six areas encompass the Federal District and all but two of Mexico’s 31 states, with regions 1-3 covering the northern half of the country and regions 4-6 covering its central and southern states.

March gas trading activity was highly concentrated in regions 5 and 3, which together accounted for 68% of the total volume reported for the month. Marketers in Region 5 traded 1.94 Bcf/d, down slightly from 2 Bcf/d in February.

Region 5 in central Mexico encompasses some of the most densely populated areas, including Mexico City. The average price for transactions in the region was 78.965 pesos/GJ ($4.459/MMBtu) in March, compared to 89.031 pesos/GJ ($5.043/MMBtu) in February.

Region 3, which covers the industrialized northeast states of Nuevo Leon and Tamaulipas, recorded a monthly volume of 1.71 Bcf/d, compared to 1.66 Bcf/d in February. It was the only region of the six to see a month/month increase in trading volume.

Gas imports from South Texas flow into Region 3 at numerous border crossing points, including NET Mexico at Rio Grande, TX, which interconnects with the Los Ramones system at Camargo in Mexico. Los Ramones underwent maintenance work during the last week of March and early April. The pipeline, part of the national integrated system Sistrangas, extends about 526 miles south to terminate in the state of Guanajuato (Region 5).

The lowest trading volume for March was recorded in Region 2 with 275 MMcf/d, roughly flat when compared to February. This area includes the northwest state of Chihuahua, which has several cross-border points connected to U.S. pipelines carrying gas from the Waha hub in the Permian Basin.

Delays to several downstream pipelines in Mexico have curtailed gas imports along this section of the U.S.-Mexico border, although most of the unfinished infrastructure is expected to come in-service by the end of this year or early 2019. The average price of gas traded in Region 2 was 68.914 pesos/GJ ($3.892/MMBtu) in March, versus 79.700 pesos/GJ ($4.248/MMBtu) in February.

The northwest Region 1, which had the highest price in March, also recorded the fewest transactions during that time at only nine. Marketers transacted 547 MMcf/d in this region during the month, compared to 656 MMcf/d in February.

Region 1 contains two isolated systems, the state-run Naco-Hermosillo in Sonora state and the privately owned Rosarito pipeline on the Baja California Peninsula. It also includes a network of private pipelines, extending south from the Arizona border, running along the Sea of Cortez coast in Sonora, and terminating near the city of Mazatlan in Sinaloa.

The operator of the Guaymas-El Oro segment, Sempra Energy’s Infraestructura Energetica Nova (IEnova), has declared a force majeure since last August, resulting from a conflict with a indigenous tribe in the area.

This region includes the Manzanillo liquefied natural gas (LNG) terminal on the Pacific Coast in Colima, which has operated at or near full capacity in recent months. Mexico also imports LNG from the Altamira terminal on the Gulf Coast in Tamaulipas, near the border between regions 3 and 6 and not far from central Region 5.

A third LNG import facility in Baja California, the Costa Azul terminal, connected the Rosarito pipeline in Region 1, has not supplied any gas to Mexican consumers since around mid-2016.