Natural gas futures crashed on Monday as production appeared to be making a quick recovery from the unrivaled Arctic blast that rocked the energy industry last week. Warming weather models also provided a headwind to prices, with the March Nymex gas futures contract tumbling 11.6 cents to settle at $2.953. April slid only 5.5 cents to $2.936. 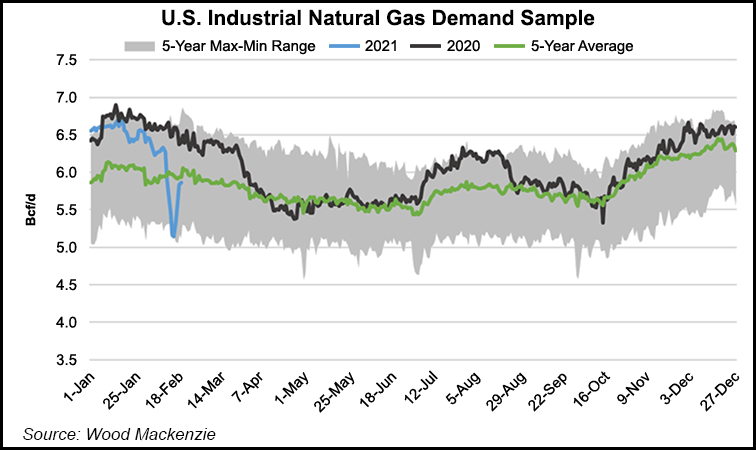 Spot gas prices continued to fall too on the much milder weather that settled in over much of the Lower 48. NGI’s Spot Gas National Avg. dropped $1.605 to $2.870.

Though likely not at the same level as last week, futures volatility is expected to remain robust in the coming days, with the March contract set to roll off the board Wednesday. Prompt-month prices were down sharply at the open and remained firmly in the red throughout the session. The April-June contracts, meanwhile, moved back to around where they were trading at the beginning of the month.

NatGasWeather said the more moderate conditions are expected to shift colder late this week, but the latest weather data paints a less colder picture than in earlier outlooks. The data is colder with a second system forecast to follow March 2-4. Overall, though, the set-up for the 12- to 15-day forecast period is bearish, according to the forecaster.

Despite the warmer weather on tap for this week, NatGasWeather said “the damage from the recent Arctic blast has been done.”

The firm expects the 54 Bcf gas storage surplus over the five-year average reflected in last week’s storage report to soon be a deficit of 300 Bcf, “making the background state bullish.

“It would just be more impressively so if the 12- to 15-day forecast wasn’t so mild,” NatGasWeather said.

EBW Analytics Group analysts expect “monster draws” to be reported this week and next, eliminating a quarter of the gas in storage to the tune of around 550 Bcf. Tudor, Pickering, Holt & Co. (TPH) struck a similarly bullish tone regarding storage, with analysts indicating “extra tightness” in the market is already reflected in supply/demand data.

The firm said data on Monday showed supply sitting at 85 Bcf/d, up from the lows of 70 Bcf/d but still around 5 Bcf/d below pre-storm levels of about 90 Bcf/d. Canadian imports are helping “plug the supply gap,” according to the firm, running around 1 Bcf/d higher than modeled. However, the net supply impact still shows a 4 Bcf/d deficit.

On the demand side, liquefied natural gas (LNG) feed gas demand is currently 8.6 Bcf/d, up from a low point of about 1.5 Bcf/d but still 2.5 Bcfd shy of nameplate, TPH said. NGI data confirmed this level of feed gas volumes. The bulk of the gap is attributable to reduced flows to the Freeport LNG terminal, where all three production units remain offline.

In addition, Mexican exports are still roughly 1 Bcf/d below prior levels, according to TPH. This is resulting in a total net demand impact of 3.5 Bcf/d.

“Putting all the pieces together, this suggests lingering storm impacts equate to around 1.5 Bcf/d of incremental tightness for a market we already estimate is undersupplied by about 3 Bcf/d,” said the TPH team. “Our latest modeling has gas storage exiting 1Q2021 at 1.5 Tcf, or 16% lower versus the five-year average.”

With the firm’s projected refill seen peaking at just 3.1 Tcf on strip pricing, analysts see Henry Hub needing to rise to $3.500 this summer to drive sufficient gas-to-coal switching to balance the market.

The Nymex strip at the close Monday showed the summer strip (April-October) sitting at $3.020.

Wood Mackenzie said there are some other large demand sectors that also may be slow to recover from the Arctic blast. Refineries in the Gulf, for example, aren’t built to withstand the cold that moved into the region, and the sudden shut-offs placed major hurdles before full recovery. Furthermore, gas nominations to many of facilities may point to signs of recovery, but reports of lengthy startup efforts contradict these data.

“Natural gas nominations, especially over the weekend, can paint a different picture than what’s actually occurring at the facility,” Wood Mackenzie said. “A quick, unplanned shutdown of refineries can cause a host of problems that take weeks to resolve before facilities resume normal operations, and extreme cold can exacerbate these issues. Monday’s gas nominations data and industry reports should provide a clearer picture of where the recovery efforts stand.”

Other industries were similarly affected, and natural gas use will likely take a similar hit, according to the firm. Fertilizer production facilities, for example, reported a sharp drop in gas nominations in both the Midwest and South Central regions as the storm hit. Methanol manufactures similarly reported a big drop in natural gas consumption.

“Both industries use natural gas as a primary feedstock, and neither can be profitable when natural gas prices are a few hundred times what they normally are,” Wood Mackenzie said.

Spot gas prices continued to fall on Monday even as a weather system with rain and snow was forecast to track across the Ohio Valley and Northeast. However, with temperatures across the U.S. Midwest and deep into the South coming in far above the records set last week, prices slipped further to start the week. Most locations moved back below $3.000 and the highest price across the Lower 48 stalled out at $5.000, rather than $1,250.000.

Gas received from Egan Hub, Pine Prairie and Texas Gas is not expected to be impacted, according to Wood Mackenzie. During a similar maintenance event in early December, gas was rerouted through Pine Prairie and Egan Hub, limiting most impacts to Sabine Pass liquefaction facilities. However, day/day declines in deliveries to Sabine Pass liquefaction facilities of 123 MMcf/d were observed during the repairs, before slightly rebounding.

On the pipeline front, Columbia Gas Transmission (TCO) declared a force majeure on Feb. 4, with restrictions that could cut more than 1 Bcf/d of westbound flow through LXPSEG in Ohio. TCO said the restrictions would be put in place as early as timely cycle for gas day Tuesday, after being postponed due to weather.

The restrictions would impact capacity through LXPSEG, MXPSEG, LONEOAK A and LEACHSEG to different extents, according to Wood Mackenzie, limiting the amount of westbound/southbound gas flowing out of TCO’s main production region and onto Columbia Gulf. The major restriction is likely to be seen at LXPSEG, where total capacity at the throughput meter would cut completely.