U.S. natural gas forward prices for November stayed in the range between $5.00 and $6.00/MMBtu this week as European and Asian energy markets continued to pressure the global benchmarks. 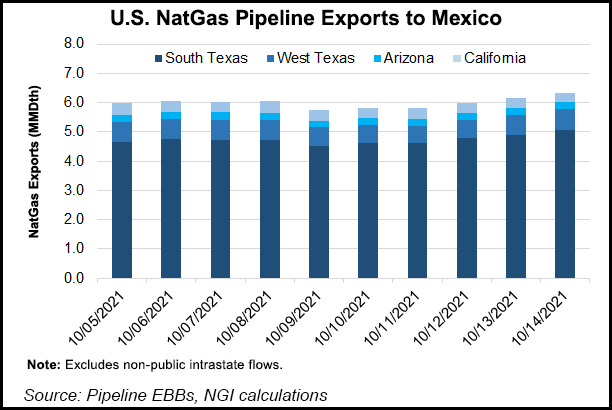 Imports from the United States rose week/week. On Thursday, Mexico imported 6.33 Bcf, with the 10-day average at 6.00 Bcf/d, according to NGI calculations.

Industrial activity has continued to recover from the pandemic-related doldrums of last year. Mexico’s industrial output was up 0.4% in August, with a year/year gain of 5.5%, according to the country ‘s Instituto Nacional de Estadística y Geografía (INEGI). After shrinking by 8.5% during 2020 from 2019, Mexico’s economy is forecast by analysts to grow by 6-7% in 2021.

There was also welcome news this week as the governments of Mexico and the United States announced that borders would reopen during November to all vaccinated travelers, promising a jolt to both economies. The world’s busiest land border has been closed to nonessential travel since March 2020.

Supply chain issues, however, continue to slam the manufacturing sector, and inflation is problematic, according to Mexico’s Central Bank. In one example, a KIA México plant in Nuevo León was shut down this week because of a shortage of semiconductors.

Is There Enough Natural Gas For Winter?

The International Energy Agency said this week the global gas market “remains subject to significant uncertainty” and is under “tremendous pressure.”

In an open letter sent in September to the U.S. Department of Energy, the Industrial Energy Consumers of America also called for reducing U.S. exports to prevent a supply crisis. However, an analyst with Poten & Partners said a move by the U.S. government to reduce exports wouldn’t pan out.

“I don’t know what mechanism the government could use to do that,” Poten forecaster Kristen Holmquist said during a recent webinar. “These are contracts.” Any attempt to prevent exports “would immediately go to court…”

In a sign of how globally interconnected the North American gas market has become, U.S. and Mexico prices for the winter months are now dependent on weather events that occur thousands of miles away.

NatGasWeather said the market is watching “whether widespread cold arrives across Asia and Europe in early November, and the latest data shows bouts of chilly air over northern Europe and northern China in the coming weeks but still waiting on frigid cold shots, typical of fall.”

Mexico’s Sistrangas five-day line pack average was 6.708 Bcf/d on Wednesday (Oct. 13), below the optimal line pack of 6.86-7.29 Bcf needed to guarantee sufficient pressure in the system.

Demand on the Sistrangas on Wednesday was 4.462 Bcf, versus 4.489 Bcf a week earlier. Mexico gas production fed into the system rose week/week to 1.324 Bcf from 1.292 Bcf. The processing centers at Nuevo Pemex (369 MMcf), Burgos (303 MMcf) and Cactus (339 MMcf) were all up on the week and were the leading injection points.

On Thursday, the U.S. Energy Information Administration (EIA) reported an injection of 83 Bcf into natural gas storage for the week ended Oct. 8. The figure was well below market expectations.

“The bulls are going to feast on this,” said analyst firm Celsius Energy, which had projected a 95 Bcf injection for the week.

The South Central region, which is key to Mexico, injected 25 Bcf into stocks, including 15 Bcf into nonsalt facilities and 10 Bcf into salts.