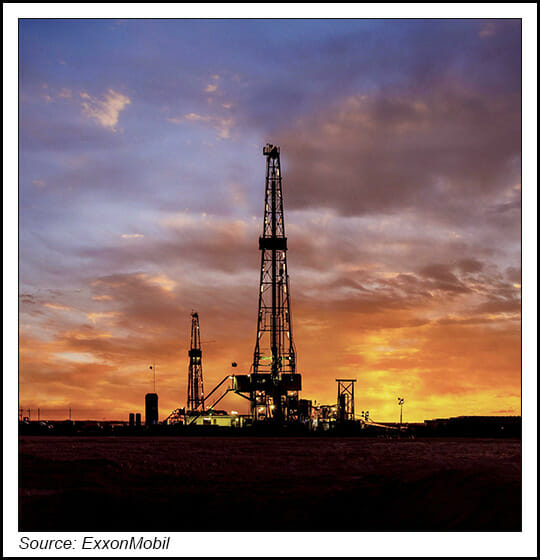 The Irving, TX-based supermajor previewed the quarterly results In a Securities and Exchange Commission Form 8-K filing. The filing provides a “perspective regarding market and planned factors affecting 3Q2022,” relative to sequential results, the company said. “These factors are generally limited to market dynamics, seasonal patterns and planned activities.”

Details for the quarterly results were sparse, but energy analysts said the numbers suggested strong upside, driven by global natural gas prices. ExxonMobil’s profits jumped in 2Q2022 because of strong oil and gas prices, with net profits of $17.9 billion and Upstream earnings of $11.4 billion.

During a scorching summer that fueled cooling demand, combined with precarious natural gas storage supplies globally, U.S. gas prices soared to 14-year highs around $9.00/MMBtu. The third quarter also was jarred by an explosion at the Freeport liquefied natural gas terminal on the Texas coast, which sent prices soaring.

Even though crude prices fell in 3Q2022 versus 2Q2022, ExxonMobil appeared to benefit “as a result of global gas pricing tailwinds relative to our modeling,” Tudor, Pickering, Holt & Co. (TPH) analysts said. “In the upstream, highlighted factors suggest earnings in the $11.8 billion range,” minus identified items. TPH had modeled 3Q2022 earnings of around $11 billion.

“With the quarter, we expect the company to fall well within its targeted $20-30 billion cash hoard, with capital allocation expected to remain topical on the call as a result.”

“We note that we had previously taken our ExxonMobil estimate down ahead of the 8-K release, given concerns on lower oil prices and chemicals margins during the quarter,” the Goldman analysts said.

“We underestimated the impact of the stronger gas price environment and continued strength in refining margins, driving robust results relative to our estimates.”

The filing implies upstream earnings estimates of  $11.8 billion at the midpoint, versus Goldman’s estimate of $8.8 billion “largely due to a benefit on the change in gas prices.”

Analyst Phillip Jungwirth of BMO Capital Markets said the filing was not “comprehensive and limited to market dynamics, seasonal patterns and planned activities…”

However, he too said the quarter’s “outperformance” appears driven by the upstream, with a “sequential uplift from gas prices.

“The results are impressive,” the BMO analyst said.

“Consensus estimates were at $10.1 billion, while we were at $9 billion on lower oil prices in the quarter,” he noted. “That said, ExxonMobil’s global gas price leverage was higher than expected and drove a $1.8-2.2 billion sequential improvement in Upstream earnings.”