Natural gas is viewed more favorably than other fossil fuels around the world, although sentiment is largely divided along ideological lines, according to a recent Pew Research Center survey. 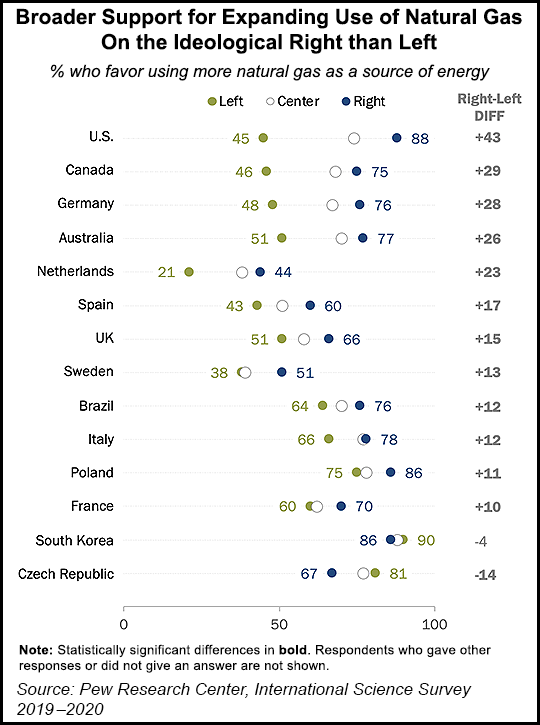 The survey was conducted between October 2019 and March in 20 countries including the United States, Canada, Brazil and Russia, along with several countries across Europe and the Asia-Pacific region.

Support for expanding the use of gas ranged from a high of 88% in South Korea to a low of 38% in the Netherlands, researchers said.

Enthusiasm for renewable power was more universal, with a median 93% and 87% of respondents saying they favor more solar and wind power, respectively.

The debate around natural gas and hydraulic fracturing (fracking) has intensified in the United States and globally, amid growing demand to take action on climate change.

Ahead of the Nov. 3 U.S. general election, Democratic challenger Joseph R. Biden Jr. has repeatedly said that he would not ban fracking, and that fossil fuels will still play a role even under the low-carbon future he envisions.

President Trump, meanwhile, has campaigned and governed on a deregulatory agenda based on removing red tape for oil and gas drilling and infrastructure.

“In most publics surveyed by the Center, there’s a significant divide by political ideology in views of natural gas, with those on the right usually more supportive than those on the left,” Pew researchers said.

“For instance, in Germany, 76% of those who place their views on the ideological right support using more natural gas, compared with 48% of those on the left.

“The ideological gap is largest in the U.S., where 88% of conservatives — and fewer than half of liberals (45%) — support expanding the use of natural gas.”

In a separate Pew survey conducted in May 2020, “just 21% of Democrats and Democratic-leaning independents in the U.S. favored more hydraulic fracturing, compared with 56% of Republicans and GOP leaners.”