In a sign that the energy industry’s recovery from Covid-19 remains choppy, monthly trading for natural gas pipeline capacity releases reversed course, soaring 178% in June, according to the latest figures from The Capacity Center. 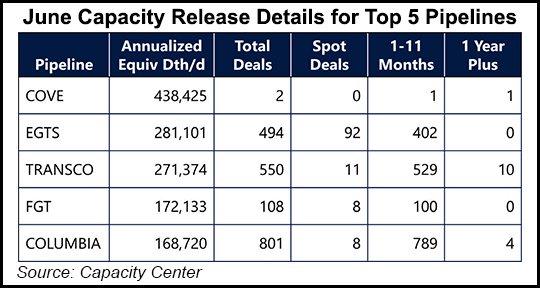 The jump was a massive improvement from May, when monthly transactions plunged 70% from April levels, the data services company’s June report showed. Spot capacity releases fell by 78% month/month, with 406 deals taking place in June. This compares to the 1,832 deals that took place in May.

The top 10 natural gas pipelines in The Capacity Center’s rankings recorded around 3,300 capacity releases last month, up 14% from May. However, the awarded natural gas capacity in an annualized equivalent was 2.0 Bcf/d, which was 11% lower than in May. The Capacity Center, a subsidiary of Skipping Stone, uses the annualized equivalent as a calculation conducted to normalize trades of differing quantities and durations.

The company’s June report also showed that capacity releases of one year or longer dropped 11% month/month, to 33 in June.

As for the top five natural gas pipelines in The Capacity Center’s rankings, Columbia Gas Transmission executed 801 capacity release transactions, the majority of which were for one to 11 months in duration. Only eight spot transactions were carried out.