In a market at the forefront of the energy transition, natural gas price signals in the western United States instead are incentivizing the construction of newbuild pipeline capacity, according to RBN Energy LLC. 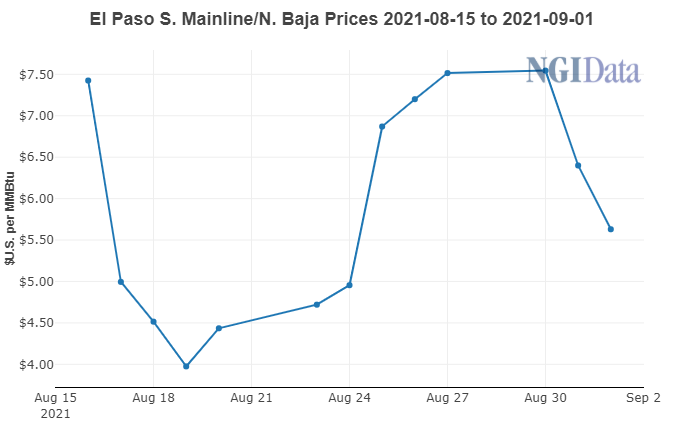 The Line 2000 segment near Coolidge, AZ, exploded early on Aug. 15, killing two people. The blast prompted EPNG to restrict Permian flows west into the Desert Southwest markets by about 0.6 Bcf/d, according to RBN.

The restrictions on Line 2000 also led EPNG to reduce line pressures on the segment all the way back to its origins in the Permian starting Aug. 26, according to RBN. Those reductions sent flows west from the Permian to zero and reduced the capacity of Line 2000 backhaul volumes to Wink, in West Texas.

As a result of the pipeline flow limitations, said Ferguson, some of the Permian Delaware sub-basin processing plants that produce into the segment were reduced, “sending production receipts on EPNG about 0.35 Bcf/d lower” near the end of the Aug. 23-27 week.

Some of that gas likely was rerouted to other residue pipelines in the Delaware, according to the analyst. However, there is “no way of knowing those volumes,” given the intrastate status of the other outlets. Those outlets include WhiteWater Midstream LLC’s Agua Blanca and Energy Transfer LP’s Red Bluff Express.

Intrastate gas pipelines are not regulated by the Federal Energy Regulatory Commission and therefore, the Texas systems were not required to disclose information on gas flows and pricing.

Gas production averaged 13.15 Bcf/d over the week preceding Aug. 30, according to RBN.

The EPNG incident exacerbated already tight conditions in the West this summer because of ongoing drought conditions and record heat. The dry conditions have strained water reserves.  Water levels at the Oroville Dam reservoir have fallen to insufficient levels, prompting the shutdown of California’s 644 MW Edward Hyatt hydroelectric power plant.

Meanwhile, the U.S. Bureau of Reclamation in August declared a water shortage at Lake Mead, at the Nevada/Arizona border. As such, water approportionments to California, Arizona and Nevada are to be cut next year.

For example, the SoCal Border Avg. natural gas forward curve on Sept. 1 showed basis — the difference to the U.S. benchmark Henry Hub — at around plus 79.0 cents for October, according to NGI’s Forward Look. That premium expands to an average of about plus $1.52 for the upcoming winter (November 2021-March 2022). The full Calendar (Cal) 2022 strip stood at around plus 94.0 cents over Henry Hub.

By comparison, SoCal Border Avg.’s October contract stood at only a 36.1-cent premium to the Henry Hub on Aug. 13, before the EPNG incident. Winter basis was at plus 88.8 cents, and the summer 2022 strip was at plus 49.1 cents.

NGI produces daily forward curves expressed as both fixed prices and basis differentials to the Henry Hub. The forward curves are published as both individual months and seasonal strips and go out 10 years at 67 locations.

Meanwhile, Waha basis as of Sept. 1 averaged around minus 24.0 cents for October, Forward Look data showed. It then flipped to a modest 1.4-cent premium for the upcoming winter. Waha Cal 2022 averaged about 24.0 cents below Henry Hub.

EPNG has not indicated when Line 2000 may be repaired. However, Ferguson said it is “somewhat risky” that the major population centers in the Southwest are reliant for most of their natural gas on a pipeline system that in some places is 70 years old.

In addition to the ongoing constraints related to the blast, EPNG last week declared a force majeure at the Waha Station following an equipment failure associated with its electric unit. The pipeline subsequently reduced capacity further by 336,000 Dth/d.

Meanwhile, though the western states have a “strong affinity” for renewable generation, the most recent data shows that demand for natural gas in California and Arizona to date this year is essentially flat from 2020. That suggests the easy gains in reducing fossil fuel consumption in the West may have hit a wall, according to Ferguson.

To that end, California Gov. Gavin Newsom in July directed the state’s Department of Water Resources (DWR) to work with other state agencies to develop projects to expand energy and supply storage to respond to energy shortages. These projects are part of California’s broader efforts to safeguard the energy grid in the face of climate-induced drought, wildfires and extreme heat waves. The DWR began the process of procuring the temporary power generators in August.

“Financial markets alone are clearly showing an incentive for construction of newbuild natural gas pipeline capacity into the markets west of the Permian, but suggesting such is anathema in the current political environment,” Ferguson said. “However, natural gas price spikes in the region look increasingly likely in the years ahead unless sober minds realize some sort of new pipeline capacity is needed to bolster reliability in the Desert Southwest.”

The temporary generators would be placed at existing power generation sites so they can feed directly into the grid as needed at the direction of the California Independent System Operator and Western Area Power Authority. Each unit, powered by natural gas, would be able to produce roughly 30 MW. However, they also would have the capability of running on a blend of up to 75% hydrogen in the future depending on hydrogen availability, according to DWR.