U.S. natural gas production is expected to be higher in August from a year ago in six of seven major onshore basins, but output has begun to weaken as associated production slumps from the pullback in oil drilling, according to data compiled by the Energy Information Administration (EIA). 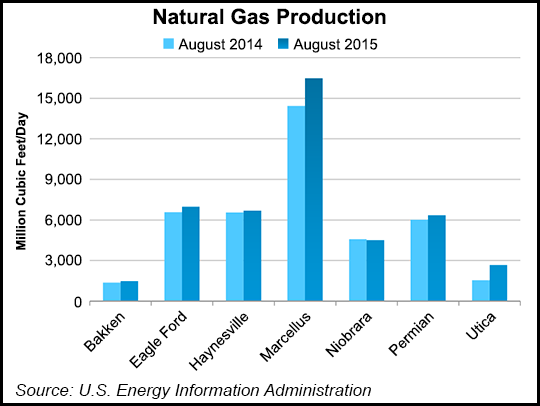 New-well gas and oil production per rig also is rising substantially across the board, according to the Drilling Productivity Report (DPR), which was issued Monday.

Gas production year/year is led by the Marcellus Shale, with shale gas from the Eagle Ford slightly edging out the Haynesville and the Permian Basin’s tight gas supplies. Gas from the Niobrara formation is about even from a year ago, while Utica Shale gas has nearly doubled. Bakken Shale gas supplies are seen slightly higher year/year.

The Marcellus, where gas production has moving at a blistering pace, should see a decline from July to August of 41 MMcf/d to 16.487 Bcf/d, EIA said. Haynesville gas output is forecast to fall by 29 MMcf/d to 6,688 MMcf/d, while in the Permian, the production decline is forecast at 14 MMcf/d to 6,351 MMcf/d.

The DPR uses recent data on the total number of drilling rigs in operation with estimates of drilling productivity and estimated changes in production from existing wells to provide estimated changes in production for the seven key regions. The seven regions accounted for 95% of domestic oil production growth and all domestic gas production growth during 2011-2013. The data, EIA noted, does not distinguish between oil-directed rigs and gas-directed rigs because once a well is completed it may produce both oil and gas; more than half of the wells produce both.