As Hurricane Michael continued on its collision course with the western Florida coast Tuesday, natural gas markets were left to weigh the impacts of Gulf of Mexico (GOM) production shut-ins against the potential demand destruction from storm-related power outages. 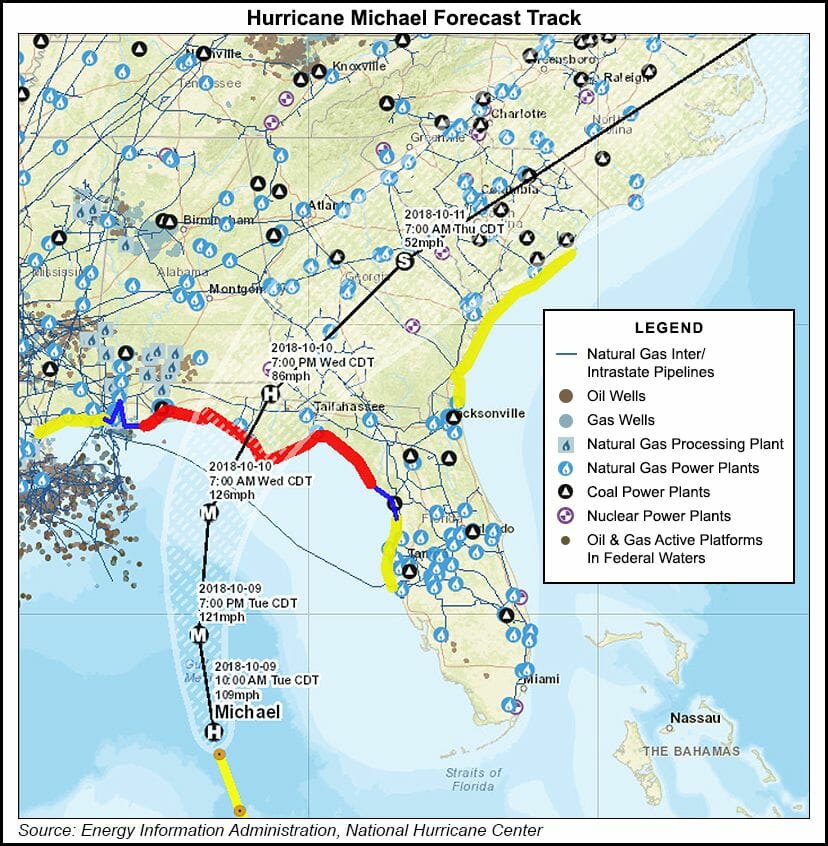 As of 5 p.m. ET Tuesday, Michael was about 295 miles south of Panama City, FL, traveling north at 12 mph, according to the National Hurricane Center (NHC). The storm, a Category 3, was projected to make landfall with the Florida Panhandle or Florida Big Bend area on Wednesday before moving northeastward through the southeastern United States. NHC said Michael is expected to deliver heavy rainfall, hurricane force winds and life threatening storm surge.

Based on operator reports, the Bureau of Safety and Environmental Enforcement (BSEE) on Tuesday estimated that around 726 MMcf/d (28.4%) of natural gas production and 670,831 b/d (39.5%) of oil production in the GOM had been shut in ahead of the storm.

As of midday Tuesday, 75 platforms and three rigs had been evacuated, while eight dynamically positioned rigs had been moved out of the storm’s path as a precaution, according to BSEE.

Genscape Inc.’s GOM production estimate Tuesday was down to 1,695 MMcf/d, more than 1 Bcf/d below the prior 14-day average, with the declines attributable to flows being shut-in at platforms offshore Alabama and Mississippi.

BP plc said it was “in the process of evacuating personnel and shutting in production at Atlantis, Mad Dog, Na Nika and Thunder Horse platforms in preparation for Hurricane Michael,” Genscape analysts Nicole McMurrer and Margaret Jones said. “The Atlantis/Mad Dog flows are related to the MarsGath/Ursa point on Mississippi Canyon, which has been flowing around 290 MMcf/d on average for the last week.

“The Na Kika and Thunder Horse platforms show up on the Destin Pipeline under the Okeanos-to-Destin point, which includes flows from Thunder Horse, Thunder Hawk and Na Kika,” the analysts said. “This point was flowing around 240 MMcf/d on average last week but has been down to nominating about 25 MMcf/d over the last two days. Offshore production on Transcontinental Gas Pipe Line from offshore Alabama is down about 100 MMcf/d as well,” potentially related to Michael.

Destin Pipeline Co. LLC notified shippers that it planned to evacuate its Main Pass 260 platform on Tuesday in preparation for the storm.

“Offshore transportation services will continue to be available following the evacuation, provided there is a total throughput of 160 MMcf/d flowing to the Pascagoula Gas Processing Plant,” the plant’s minimum requirement to sustain operations, the operator said.

On the demand side, McMurrer and Jones said Michael is expected to have less impact than last year’s Hurricane Irma, since “Michael is a relatively compact system that should miss the largest demand areas in Florida.

“In contrast, total power demand destruction during Irma was approximately 10 Bcf over a seven-day period,” McMurrer and Jones said. “Power demand fell by around 2.5 Bcf/d from peak-to-trough in the U.S. Southeast region (mostly in Florida). On Sept. 11, 2017, 6.1 million customers in Florida were without power (56% of the state), which fell to 2.6 million by Sept. 15, 2017.

“Although Michael is likely to bring power outages, they are unlikely to have the widespread impact of outages during Irma since more of the impacts will be on the lower population density Panhandle rather than the peninsula.”

Utilities in the region were busy bracing for Michael’s landfall. Florida Power & Light Co. (FPL) said it had deployed 1,350 employees and contractors along Florida’s west coast and the northern parts of its service territory to be ready to respond to any storm impacts.

“Although we are hopeful that Hurricane Michael will not directly impact our service area, our team stands at the ready to restore power safely and quickly for our customers and help others to do the same for their customers,” FPL CEO Eric Silagy said. “This includes preparing to move our workers and equipment to the areas where they may be most needed. We appreciate Gov. Rick Scott’s forward-leaning decision to declare a state of emergency days before the storm hits, which helps FPL and other electric providers prepare and restore power more quickly and efficiently.”

Duke Energy earlier in the week warned of the potential for extended power outages in its Florida service territory.

“Hurricane Michael is intensifying and poses a significant threat to the Florida Panhandle and will affect west central Florida,” said Duke senior meteorologist Max Thompson. “Some of our most populated service areas, such as Pinellas and Pasco counties, might experience tropical storm-force winds and experience outages. We join state officials in asking everyone to take this storm seriously.”

Gulf Power said its crews were preparing for widespread power outages once Michael makes landfall. The utility said nearly 1,200 employees and 330 contractors were standing by to restore power once the storm hits, along with outside resources lined up to assist in the restoration efforts.