The long-standing growth trend in the U.S. onshore will continue into July, with cumulative natural gas and oil production from the country’s seven most prolific unconventional plays expected to exceed June’s totals, according to the Energy Information Administration (EIA). 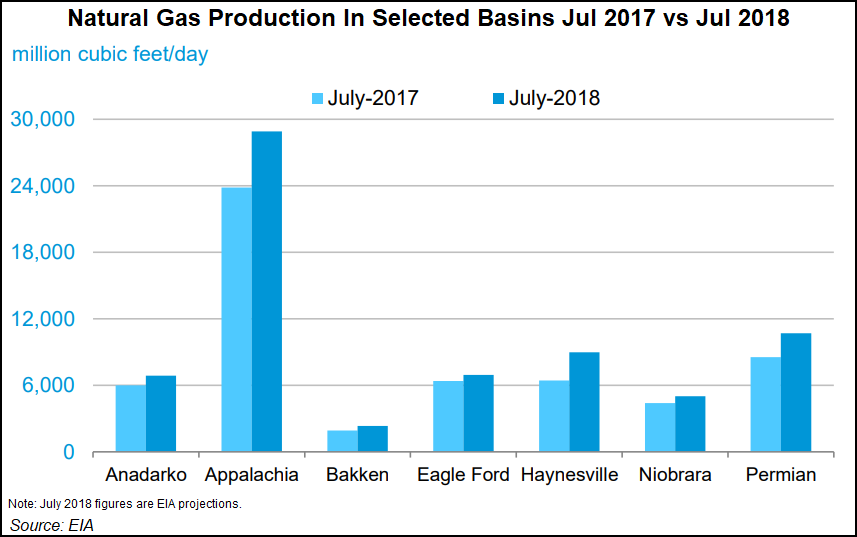 EIA on Monday released its latest monthly Drilling Productivity Report (DPR), which uses recent U.S. data on the total number of drilling rigs in operation along with estimates of drilling productivity and estimated changes in output from existing wells to provide estimated changes in production for seven key regions: the Anadarko, Appalachian and Permian basins, and the Bakken, Eagle Ford, Haynesville and Niobrara formations.

EIA’s latest DPR forecast has total gas production from these seven regions climbing to 69.76 Bcf/d in July, adding a little over 1 Bcf/d to June’s estimated 68.62 Bcf/d of output. All seven regions are expected to post increases month/month (m/m) to their gas output, with the Appalachian region leading the way in EIA’s projections, adding 371 MMcf/d to 28.91 Bcf/d.

The resurgent Haynesville Shale in East Texas and northern Louisiana is expected to grow its output by 235 MMcf/d m/m to 8.97 Bcf/d in July. The crude-focused Permian Basin should continue to add associated gas to the domestic production mix, climbing an estimated 229 MMcf/d m/m to 10.70 Bcf/d for July, according to EIA.

As for oil production, the Permian — located in West Texas and southeastern New Mexico — is expected to lead among gainers, with EIA expecting output from the U.S. onshore’s most active play to grow by 73,000 b/d to reach 3.35 million b/d in July.

Oil production from the Haynesville is expected to remain flat at 42,000 b/d in July, according to EIA.

The overall number of drilled but uncompleted wells (DUCs) among the Big Seven plays rose by 31 from April to May, totaling 7,772, according to the agency’s latest DPR data. That was driven by a sharp increase in Permian DUCs (up 100 to 3,203), while the Eagle Ford (up 14 to 1,485) and the Bakken (up one to 750) also added to their DUC inventory m/m.

Meanwhile, the Anadarko (down eight to 913), Appalachia (down 27 to 744), the Haynesville (down one to 186) and Niobrara (down 48 to 491) all drew down their respective DUC inventories from April to May, according to EIA.

The production increases forecast in the DPR would continue a trend that began in January 2017. At that time, total gas production out of the plays was estimated at 47.51 Bcf/d, and total oil production was an estimated 4.54 million b/d.