Energy Secretary Jennifer Granholm on Wednesday extended a “hand of partnership” to the natural gas and oil industry and urged producers to do what they could to boost supply. 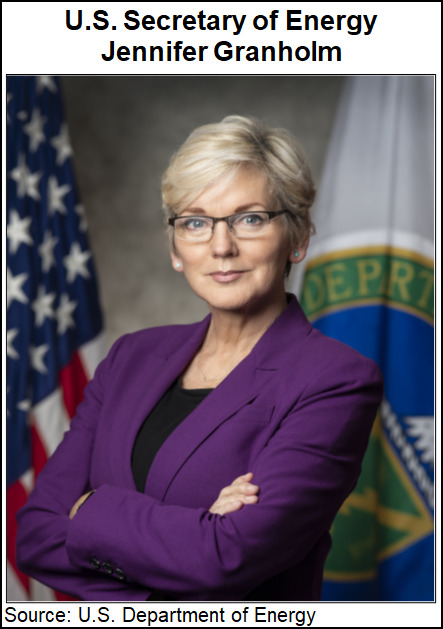 “We are on war footing – an emergency – and we have to responsibly increase short-term supply where we can right now to stabilize the market and to minimize harm to American families,” Granholm told the audience at CERAWeek by S&P Global in Houston.

The crowd of energy executives, many with exploration and production (E&P) companies, were urged to produce “more right now, where and if you can.”

The call to action came one day after President Biden banned Russian oil, natural gas and coal imports to squeeze one of the main arteries of Russia’s economy after Ukraine was invaded. The United States also is working with 30 other countries to release 60 million bbl of oil from reserves around the world, with 30 million bbl by the United States.

Look for another possible release of U.S. oil from the U.S. Strategic Petroleum Reserve, Granholm said.

The visit to CERAWeek was in part to “extend a hand of partnership” to the energy industry, she said. It’s a remarkable turnaround from early 2021, after President Biden took office and called for ending fossil fuel use in favor of net-zero carbon alternatives.

Russia’s unprovoked invasion of Ukraine, however, quickly moved the energy transition goals to the sidelines. Fossil fuels are back on the table, and E&Ps are now urged to ramp up.

“We could not be having this conversation at a more intense, troubling, shocking time in world history…with enormous consequences for the future of energy,” Granholm told the audience. “Maybe it’s because a global crisis, like what’s happening in Ukraine, sharpens the mind, but I’m in a mood to cut to the chase here and tell you what I really think about where we are as a country and as a part of the energy sector.

“Like many of you, I’m shocked and furious about what I’m seeing,” she said. “The images of Ukrainian bravery and determination are breathtaking. The images of carnage and bombing and death are sickening. Ukrainian grandmothers and grandsons will fight with knives and broomsticks if they have to, to keep their country.”

The bravery by the Ukrainians “should inspire all of us to do our part, to enlist in this battle in the ways we can,” Granholm said.

“We will not be financing Vladimir Putin’s war.”

The Energy secretary then praised BP plc, ExxonMobil, TotalEnergies SA, Shell plc and other companies that agreed to withhold spending and withdraw from Russian operations.

“But there’s more to do,” Granholm said. “There are more battles. Putin’s actions have sent the oil market reeling. I don’t have to tell you that when oil is $112/bbl, and $4.25 at the pump, the impacts are severe and real for people who buy your product – regular working folks, from Uber drivers to teachers to farmers. ”

“At the same time,” she said, “the war in Ukraine isn’t the only thing sending shock waves through the energy sector. We’ve also got to reckon with the impact of climate change – and the clean energy transition that isn’t just coming. It’s here.

Granholm said she understood the dilemma that energy operators are facing as they revamp their strategies.

“This is beyond hard. You’ve got businesses to run, and employees who are nervous about the change. So we have to do this right – with the right timing, the right technologies, the right partnerships. And we can.”

It’s not the time, however, to “recycle old talking points.  People are arguing that if a pipeline that wouldn’t have even been in operation by now were still under construction, the situation with today’s oil prices would somehow be different.”

Why Not Work Together?

Granholm dismissed the talk that the president’s policies have decreased oil and gas production. The country is “actually at record levels” of natural gas and liquefied natural gas “and will be at record levels of oil production by next year, when there are over 9,000 onshore drilling permits that are sitting unused.”

That’s nothing but political “BS,” Granholm told the audience. “Aren’t we ready to finally work together to confront this moment of crisis…and come out stronger on the other side?”

The administration is “under no illusion” that every American plans to buy an electric vehicle or heat pump anytime soon.

“It is a transition,” she said. “And we’re pragmatic about what it means. We know it won’t happen overnight.  And we’re serious about decarbonizing while providing reliable energy that doesn’t depend on foreign adversaries.”

The country can “walk and chew gum at the same time,” said the former Michigan governor. “So yes, right now, we need oil and gas production to rise to meet current demand.

“And we are here to work with anyone and everyone who’s serious about taking a leap toward the future…by diversifying your energy portfolio to add clean fuels and technologies, like many of you are starting to do or have been doing.” Those companies will be able to reap the rewards “of a clean energy market that will exceed $23 trillion by the end of the decade…

“I’m here to extend a hand of partnership…because we’ll only be able to meet these challenges of oil and gas supply and climate change by working together.”

Granhom said it’s often difficult “to see history in the making. But we’re on the cusp of the most important transition human society has ever seen. I hope we’ll look back at 2022 as the year the world took giant steps to improve energy security and tackle climate change. And to do that, to be on the right side of history, we need to work together.