The natural gas and oil industry is calling on policymakers to treat all forms of low-carbon hydrogen equally when doling out incentives in order to maximize the reduction of climate-warming greenhouse gas (GHG) emissions. 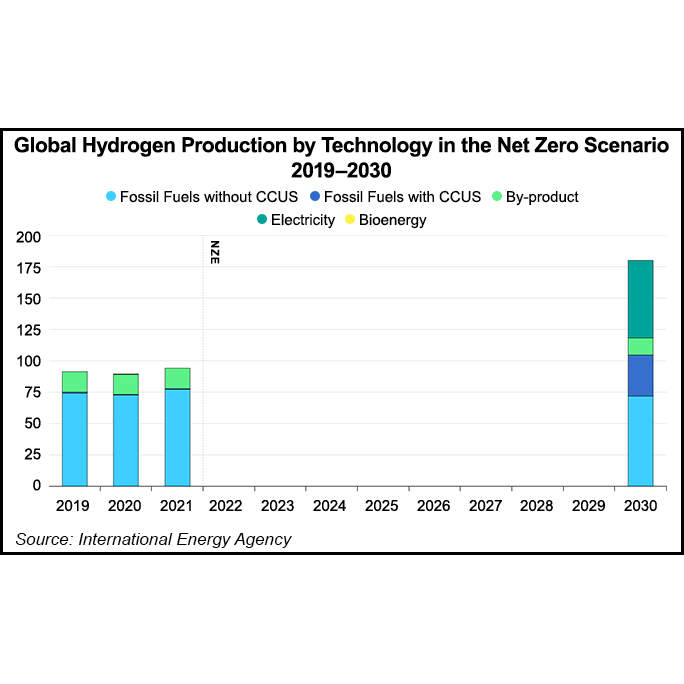 Namely, so-called “blue” hydrogen, separated from natural gas in combination with carbon capture and sequestration (CCS), should not be put at a disadvantage to “green” hydrogen, according to the American Petroleum Institute (API). The green label applies to hydrogen split from water via electrolysis powered by carbon-free electricity.

A new study commissioned by the energy industry lobbying group found that blue hydrogen could eliminate an additional 180 million metric tons/year (mmty) of GHG emissions on average through 2050 if incentives were applied uniformly on a per-ton basis of emissions reduced.

“Our industry is committed to advancing innovative technologies like low-carbon hydrogen, which are crucial to reducing GHG emissions economy-wide,” said API’s Aaron Padilla, vice president of corporate policy. “Working together with policymakers to incentivize all forms of low-carbon hydrogen and accelerate hydrogen production through programs under the Bipartisan Infrastructure Law, we can drive down emissions while ensuring American consumers have access to the reliable energy they need.”

[2023 Natural Gas Price Outlook: Tune in to NGI’s Hub & Flow podcast as our market analysts discuss what is affecting the price of natural gas in North America. From U.S. production to mild winter weather, Canadian prices to Mexican demand, LNG exports to pipeline constraints, this episode lays out the fundamentals of the market in a way only NGI can. Listen now.]

The Inflation Reduction Act of 2022 (IRA), meanwhile, created a production tax credit (PTC) of up to $3/kg for low-carbon hydrogen. In order for a hydrogen producer to claim the full credit, the emissions intensity of production must be under 0.45 kilogram (kg) of carbon dioxide equivalent/kg of hydrogen. If the emissions intensity is between 0.45 and 1.5 kg, however, the percentage of the credit that could be claimed plunges by two-thirds to 33.4%.

This creates “a disincentive from really pursuing and pushing for natural gas and CCS produced hydrogen, because you know just by chemical and physical properties, getting to that 0.45 is going to be extremely difficult,” an industry lobbyist told NGI. For green hydrogen, “that one is pretty straightforward…it’s much easier to meet that 0.45 threshold.”

The IRA expands and extends the Internal Revenue Service Section 45Q tax credit for CCS. However, a blue hydrogen producer cannot “stack” the 45Q credit on top of the clean hydrogen PTC, creating an additional challenge.

Companies can, though, stack the IRA’s renewable energy and clean hydrogen PTCs, giving green hydrogen another leg up.

The IRA’s fee on fugitive methane emissions also could add to costs for producers of blue hydrogen, the lobbyist noted.

How Big Will The Hydrogen Market Become?

The Department of Energy (DOE) has set a target for the United States to produce 50 mmty of clean hydrogen 2050.

The API-backed study carried out by consultancy ICF found that, “When every ton of emission reductions are incentivized the same, the U.S. hydrogen market could be three times larger by 2050 than when emission reductions are treated unequally (i.e., [the] hydrogen market could be 15% of total end-use energy consumption in 2050 versus 4% of total end-use energy consumption in 2050).”

In addition, “the larger hydrogen economy resulting from uniform incentives could avoid an additional 83 million metric tons of U.S. GHG emissions on average per year through 2050 than if incentives were unevenly implemented,” API said. “Enabling incentives for all hydrogen production is equivalent to eliminating the emissions from more than 38 million cars annually, according to API analysis.”

The group added that uniform incentives could reduce the cost of mitigating a metric ton of carbon by an average of 12% annually, saving over $450 billion cumulatively through 2050.

A massive infrastructure buildout is needed for hydrogen to contribute meaningfully to decarbonization, researchers noted.

“Capital investment in hydrogen infrastructure projects could exceed $400 billion by 2050 and include the construction of 67,000 miles of hydrogen transmission pipeline, 500,000 miles of customer laterals and local distribution company pipeline/service lines, and 560 trillion Btu of hydrogen underground storage capacity,” according to API.