The U.S. oil and natural gas industry is blasting President Trump’s plan to impose tariffs on imported steel and aluminum, claiming the decision would destroy jobs by raising the costs and even scuttling infrastructure projects, but the president appeared unwilling to compromise. 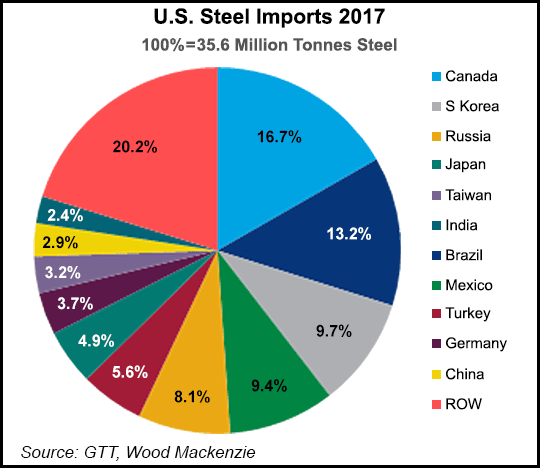 Trump on Thursday said he plans to impose a 25% tariff on steel imports and a 10% tariff on aluminium imports, regardless of country of origin, to protect U.S. industry.

The administration plans to use a legal provision under Section 232 of the 1962 Trade Expansion Act that would allow it to take steps with an argument that the imports threaten national security.

The Department of Commerce in February offered options regarding the tariffs, outlining in a report the tariffs could increase U.S. steel industry capacity utilization to 80% from a current level of about 73%.

However, opponents claim the tariffs would not increase jobs and could in fact lead to a global trade war.

The decisions would be “inconsistent with the administration’s goal of continuing the energy renaissance and building world class infrastructure,” said American Petroleum Institute CEO Jack Gerard. “The U.S. oil and natural gas industry, in particular, relies on specialty steel for many of its projects that most U.S. steelmakers don’t supply.

“Consideration must be given to continue the unprecedented and historic energy renaissance that our industry has driven through important investments that have driven job creation and economic growth.”

The domestic energy industry “relies on these global steel imports for the majority of its operations,” he said, including steel for drilling, onshore/offshore production facilities, pipelines, liquefied natural gas (LNG) terminals, refineries and petrochemical plants.

“We are concerned that the administration’s plan to impose tariffs on steel could have the unintended effect of endangering much-needed U.S. LNG export projects,” said CLNG Executive Director Charlie Riedl. “These projects benefit the economy, create jobs, improve our trade deficit and provide global environmental benefits.

“The administration had taken meaningful steps to improve the current permit review process for natural gas infrastructure and it would be unfortunate if their steel tariffs created new and different barriers to projects.”

The Association of Oil Pipe Lines (AOPL) also reacted harshly to the plan. “We are urging the administration to avoid killing U.S. jobs through a steel tariff that impacts pipelines,” said AOPL CEO Andy Black.

An AOPL study conducted last year indicated that a 25% increase in pipeline costs could increase the budget for a typical project by $76 million. For example, TransCanada Corp.’s proposed Keystone XL expansion would cost at least $300 million more.

Trump’s decision to impose tariffs would buck the advice of senior staff and GOP leaders. However, on Friday, he appeared to double down, posting a series of Twitter messages beginning before 6 a.m. EDT, acknowledging that a global trade war could ensue.

The president argued that other countries take advantage of the United States because more goods are imported than exported.

“When a country (USA) is losing many billions of dollars on trade with virtually every country it does business with, trade wars are good, and easy to win,” Trump tweeted. “Example, when we are down $100 billion with a certain country and they get cute, don’t trade anymore — we win big. It’s easy!”

Trump subsequently threatened to impose “reciprocal taxes” against any country with an import duty on U.S. goods or services.

“When a country Taxes our products coming in at, say, 50%, and we Tax the same product coming into our country at ZERO, not fair or smart,” the president tweeted. “We will soon be starting RECIPROCAL TAXES so that we will charge the same thing as they charge us. $800 Billion Trade Deficit — have no choice!”

Trump also tweeted, “We must protect our country and our workers. Our steel industry is in bad shape. IF YOU DON’T HAVE STEEL, YOU DON’T HAVE A COUNTRY!”

Countries around the world took offense at Trump’s plan, including Germany, France and the United Kingdom. Canada, the largest U.S. trading partner, said the move was not acceptable.

Minister of Foreign Affairs Chrystia Freeland reminded Trump that Canada is not only a key ally but also the “No. 1 customer of American steel.” Canada views “any trade restrictions on Canadian steel and aluminum as absolutely unacceptable.

“Any restrictions would harm workers, the industry and manufacturers on both sides of the border,” Freeland said. “The steel and aluminum industry is highly integrated and supports critical North American manufacturing supply chains. The Canadian government will continue to make this point directly with the American administration at all levels.

“Canada is a safe and secure supplier of steel and aluminum for U.S. defence and security. Canada is recognized in U.S. law as a part of the U.S. National Technology and Industrial Base related to national defense.” The United States, said the foreign affairs minister, “has a $2 billion surplus in steel trade with Canada. Canada buys more American steel than any other country in the world, accounting for 50% of U.S. exports.

“It is entirely inappropriate to view any trade with Canada as a national security threat to the United States,” she said. “We will always stand up for Canadian workers and Canadian businesses. Should restrictions be imposed on Canadian steel and aluminum products, Canada will take responsive measures to defend its trade interests and workers.”

According to Wood Mackenzie’s He Ming, senior manager, the United States last year imported 35.6 million metric tons (mmt) of steel, around 36% of its consumption, equivalent to about $33.6 billion. China accounted about 2.9% of U.S. total imports, but total volume was only 1.4% of China’s total exports at 74.82 mmt.

“Thus, the steel tariffs will not have much impact on Chinese steel exports and China does not have as much to lose as the traditional U.S. trading partners,” Ming said. “The proposed protection measures will have more negative impact on steel imports from Canada, Mexico and Brazil. South Korea, the largest source of U.S. imports from Asia, will be heavily hit if the U.S. imposes steel tariffs.”

South Korea has filed a complaint with the World Trade Organization over five steel anti-dumping duties and countervailing measures imposed by the United States, Ming noted. If Trump were to choose one of the proposed protection measures, “it will trigger a wave of similar complaints,” Ming said.

“We think the steel tariffs will not solve the underlying problem of high cost of steelmaking in the U.S., which has forced steel end-users to search for cheaper imports,” said the Wood Mackenzie analyst. “Its intention to protect employees in the steel and aluminium sectors will be offset by more job losses in the metal-intensive industries such as car manufacturers.”

ClearView Energy Partners LLC analysts said, “The prospect of action on steel brings us back to the three energy tensions of ”Trumpitude’ we outlined in early 2017: ”rip-it-up’ versus ”write-it-again’ deregulation; nationalism versus globalism; and upstream production versus manufacturing.

“In our view, action on steel would underscore an already visible uptick in White House economic nationalism,” said ClearView analysts led by Kevin Book. “It also could amount to a notable pivot from oil producers to manufacturers.”

Producer groups have voiced their concerns to the White House, “but they appear thus far to have been unsuccessful in stopping the coming action on steel imports,” said the ClearView team.

That begs the question, “if the president adheres to the Commerce Department’s recommendations for a strict cap that reallocates exemptions and exclusions, will producers and pipeline companies succeed in convincing administration officials to shift the oil sector tariff woes to another sector’s balance sheet? We’re not so sure,” analysts said.

“Ironically enough, the oil sector’s economic success could make its political arguments more difficult than they might have been five years ago.” Domestic oil production has increased to nearly 10 million b/d, with most of the increase in the last five years, according to the Energy Information Administration.

“Just as the supply-side story points to newfound abundance, demand-side impacts appear to reflect the enduring impacts of lessons learned during scarcity.”