Pennsylvania’s oil and natural gas industry supported 6.1% of the total jobs and 9.7% of its gross domestic product (GDP) in 2019, according to a new study commissioned by the American Petroleum Institute (API). 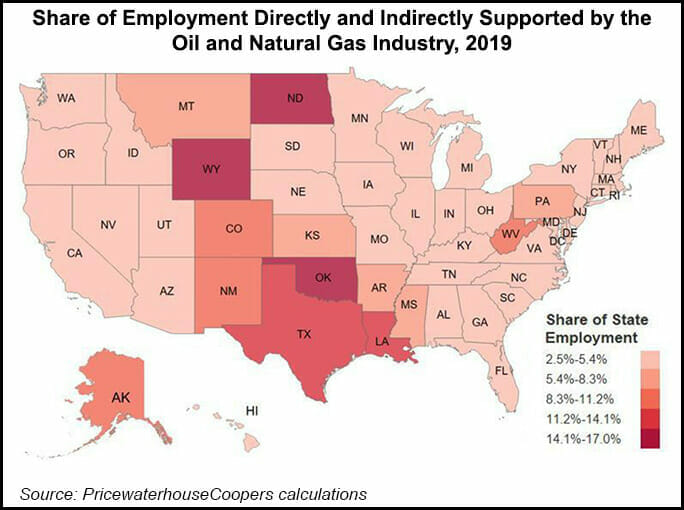 Pennsylvania is the country’s second-leading producer of natural gas after Texas.

“Every state across the country — both blue states and red states — rely on American energy to fuel each sector of the economy and support millions of U.S. jobs,” said API CEO Mike Sommers.

“This study reinforces that Pennsylvania’s economic outlook is brighter when we are leading the world in energy production, and it serves as a reminder of what’s at stake if policymakers restrict access to affordable, reliable energy and make us more dependent on foreign sources.”

“As America’s economy comes back, the natural gas and oil industry will serve as the foundation for long-term growth and prosperity in Pennsylvania,” Sommers said.

Nationally, the energy industry supported more than 11.3 million total jobs (2.5 million direct and 8.8 million indirect), or 5.6% of U.S. employment in 2019, a year in which the United States led the world in oil and gas production.

Oil and gas contributed nearly $1.7 trillion to the national GDP, accounting for 7.9% of total economic output. This included $763.3 billion generated directly by the industry and $925.3 billion indirectly.

The industry generated an additional 3.5 jobs elsewhere in the economy for each direct job in oil and gas, researchers said.

Texas, which produces more oil and gas than any other state, also ranked substantially above all others in terms of direct economic impacts of the oil and gas industry, researchers said. The Lone Star State’s oil and gas sector recorded 620,000 jobs and $134.2 billion of labor income in 2019.

Pennsylvania, California, Oklahoma and Louisiana each recorded more than 100,000 jobs directly attributable to oil and gas.

The oil and gas industry supported 16.7% of all employment in Oklahoma, the highest share for any state.