Goldman Sachs on Friday reduced its forecast for natural gas and liquids prices for 2020-2021 because of the unrelenting onslaught in Lower 48 supplies and, barring a cold winter, lower demand. 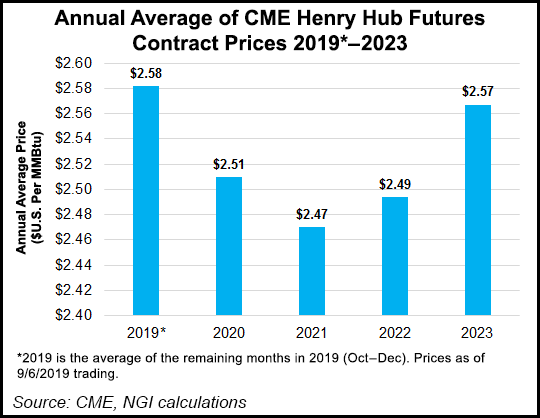 “With additional Permian Basin connectivity to Henry Hub markets upcoming and the Haynesville Shale rig count still robust, we believe we do not need as strong a price signal for gas-by-choice drilling,” said analysts led by Brian Singer.

Goldman’s previous base case of $2.75 Henry Hub and natural gas liquids (NGL) averaging 35% of West Texas Intermediate (WTI) oil was predicated on a 1% year/year decline in 2020 spending among the U.S. exploration and production companies it covers.

NGLs now are forecast to be 29% of average WTI, and the firm said a $2.50 average gas price would likely reduce year/year capital expenditures (capex) by 3%. During the first half of this year, gas producers covered by Goldman represented around 45% of total domestic gas supply.

Natural gas continues to be challenged by associated production from oil wells, which has reduced the need for “gas-by-choice” drilling, Singer noted. In addition, domestic demand has moderated from the slowdown in coal plant retirements.

“The biggest surprise for us has been that the Haynesville Shale rig count has remained robust despite prices below $2.75/MMBtu,” Singer said. “Despite our lower forecast and updates to our outlook for Haynesville well productivity, we continue to see breakeven gas prices to earn an 11% rate of return around $2.75 MMBtu.”

The most active Haynesville operators are hedged and/or are private equity-backed, he noted. A decline in activity in the shale play is still expected, but it’s unlikely to happen until prices fall even more.

In Appalachia, the hub of U.S. gas production, activity has started to slow, a trend that should continue through next year.

“We continue to forecast a slightly lower breakeven gas price in Appalachia versus the Haynesville but see Appalachian producers responding more quickly to price signals due to weak balance sheets and public market pressure to balance capex/cash flow,” Singer said.

Meanwhile, in the associated gas-rich Permian Basin, new pipeline connectivity likely is the key for pricing in the next six to 18 months.

Bottom line: the incremental Permian production is going to compete with Henry Hub, which would pressure prices.

“The ultimate production/storage impact will help determine the full impact of regional versus benchmark price impact; we believe Permian Basin production is likely to grow at 2 Bcf/d year/year in 2020,” Goldman analysts said.

TPH expects portions of the liquids-rich areas of the Northeast, Midcontinent and parts of the Eagle Ford Shale “to remain pressured for incremental capital under a lower-for-longer NGL pricing scenario combined with a weak gas tape.”

The fundamentals for NGLs have remained weak for the last few quarters at both the Conway and Mont Belvieu hubs because of the ongoing surge in ethane supply, combined with constrained liquefied petroleum gas capacity.

“Our updated macro view does see some marginal improvement to spot propane price near term, but upside is likely limited given tight arbitrage to the global market, while downside risks may be lurking on the horizon as incremental propane supply is set to exceed incremental global demand,” the TPH analysts said.

Around 360,000 b/d of cracking capacity is likely to ramp up over the next year to 18 months, which may lead to short-term price increases. However, elevated pricing in turn would lead to “incremental extraction of rejected ethane,” which TPH estimated would be 1 million b/d in 2020. That would keep a lid on prices.

“Overall, we believe natural gas pricing will set the ethane pricing floor plus a modest fractionation spread premium,” at a five-year average of 4 cents/gallon, which was zero during the “robust” growth period of 2013-2015.

Don’t hold your breath on propane pricing either, according to TPH. Propane pricing has disconnected from crude as strong U.S. production has lifted inventory to 14% above the five-year average, offsetting a 20%-plus gain in exports year-to-date.

“With minimal U.S. domestic petrochemical additions on deck, the marginal molecule must be exported,” the TPH team said. “Overall, we see propane pricing (as a percentage of Brent) temporarily rising in 4Q2019 as elevated exports help ease the domestic inventory glut.” Analysts now expect U.S. propane pricing to trade under 35% of Brent in 2020.

Natural gas futures finally found their footing in the final hour of trading Thursday after an unusual government inventory report that left traders scratching their heads. Lower export levels and forecasts pointing to less heat next week also weighed on prices, but outlooks for strong demand next month on both fronts provided a late boost.…